"This is a f*cking joke. And y'all better do something. Because let me tell you, you want to f*cking see a criminal or show you a f*cking criminal. I’ve had it," said Timothy Swales. 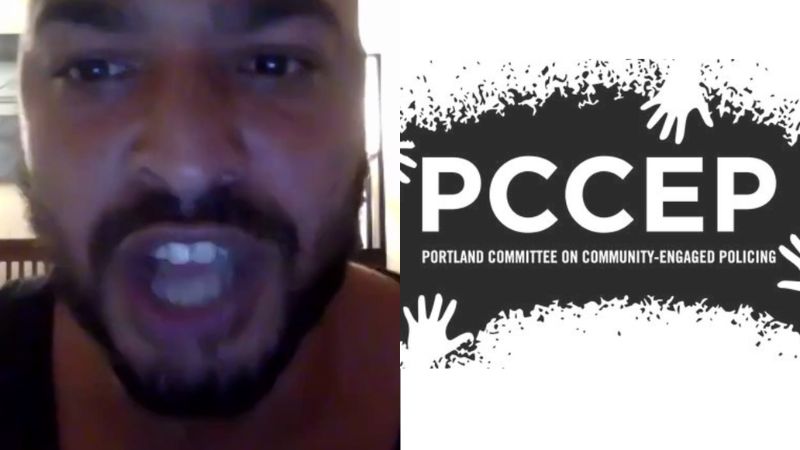 During Wednesday evening virtual meeting of the Portland Committee on Community-Engaged Policing regarding the Portland Police’s response to riots in the city in 2020, Antifa members threatened violence against the community, and a county employee threatened journalist and The Post Millennial editor-at-large Andy Ngo.

Seemab Hussaini, the Justice Fellowship Program Coordinator at the Multnomah County Office of Community Involvement, wrote in the comment section of the Zoom meeting: "I love knowing that Andy cannot walk anywhere in Portland."


The city is a hotspot for Antifa activity, with Ngo being attacked numerous times by Antifa members.

One speaker, a Portland resident, Antifa sign language interpreter, and drag queen by the name of Anne J. Tifah, said that Ngo "leaked" his information to the internet and "doxxed" him.

The speaker, whose real name is Andrew Tolman, said, "I personally was arrested during the 2020 protests for interpreting on the streets while standing on the sidewalk interpreting on Facebook Live. I wasn’t doing anything except for… providing access that your police force was failing to provide, giving warning and instructions to people who could not receive that information and were brutalized and arrested anyway."

"I also had my information leaked to the internet and doxxed by someone in this group named Andy Ngo, who did that to multiple other people.

"Again, I want to emphasize that my information was leaked to the internet and my personal information was doxxed because I was providing ASL interpretation when you did not," Tolman said.


In response to Tolman’s claims of doxxing, Ngo wrote in the meeting’s chat, "Mr. Andrew Tolman, I did not 'dox' you. It was a matter of public record that you were arrested and charged."

Ngo included a link to booking information for Tolman, which is available to the public. The arrest, which took place on August 23, 2020, was for interference of a peace officer, a Class A misdemeanor.

Another speaker raised claims of doxxing, to which Ngo said, "Ms. Kathleen Mahoney, you shouldn’t use a public forum to spread disinformation as a practicing attorney. That is unethical. I did not 'dox' you. I posted the public records of your arrest and charges in 2020, which included attempted assault, resisting arrest and more."

These charges were interfering with a peace officer, resisting arrest, and attempted assault of a police officer.

Shortly after this, Ngo was removed from the public meeting by moderators of the panel.


Another man, Timothy Swales, which according to Ngo has a pending felony case, made threats during his rant.

Swales said that between July 16 and 17, 2020, he went to retrieve his car and "drove behind the line," accusing the police of t-boning his vehicle.

"This forum is a f*cking joke. You all know what the f*ck you need to do in y'all refuse to f*cking do it. The question is why? I want to know why. And I'll give you time to answer. Why? Why do you allow racist f*cking police officers in this city?" He screamed.

"My f*cking life for the last two years have been ruined with pending felony charges for doing what? Obeying their f*cking orders, never being violent, using my f*cking voice. This is a f*cking joke. And y'all better do something. Because let me tell you, you want to f*cking see a criminal or show you a f*cking criminal. I’ve had it."


Others though spoke in support of the police, and against the direction the city is heading following the summer of 2020, which was marked by weeks of violence and destruction.

One man, who identified himself as a Portland resident and videographer who captured the 2020 riots said, "I was a target by Antifa when I was out there filming because they don’t like to see truthful recording."


He said that he had never been arrested, but had been shot by less lethal munitions on a number of occasions, "one of them I’ll take ownership for" because he got too close to the scene.

"I’m not going to cry about it, it happened, left a scar on my leg. Well, it just comes with the territory, you know, the so-called chemical sprays, that was really — it wasn’t that bad," he said, noting that he wasn’t wearing a mask unlike Antifa rioters who are frequently seen with respirators who he said seemed to be "exaggerating everything."

"But I just want to say that the police did their job to the best of their abilities, and they were in a terrain where these rioters, Antifa, so-called protestors were very inflammatory towards the cops. They were throwing Molotov cocktails at them. I was filming them hurl racist remarks at black officers. I mean, this just the most deplorable things you could imagine screaming at them all night and these officers were working overtime."

Another woman, who said that she was a tourist that travels the world, began to say that "Portland is no longer the —" before being cut off by a person that said, "shut the f*ck up Debbie, no one cares about you."

After a moderator intervened, the woman said that while she thought the police went overboard in some instances, she noted that Portland is "the whitest city in the entire country," noting that all speakers lined up to speak that night were white.


"It’s 75 percent white in Portland, and what people don’t feel safe from are you people who are burning buildings, who are terrorizing anybody walking down the street. You terrorize anybody who doesn’t agree with you, and that is what is making Portland unsafe."

"I’m not even [a] right winger. I am a regular liberal. And that’s what I am watching. It’s disgusting. And the police need to be there. The police need to start prosecuting the people who are committing acts of violence, who are terrorizing visitors and business owners."