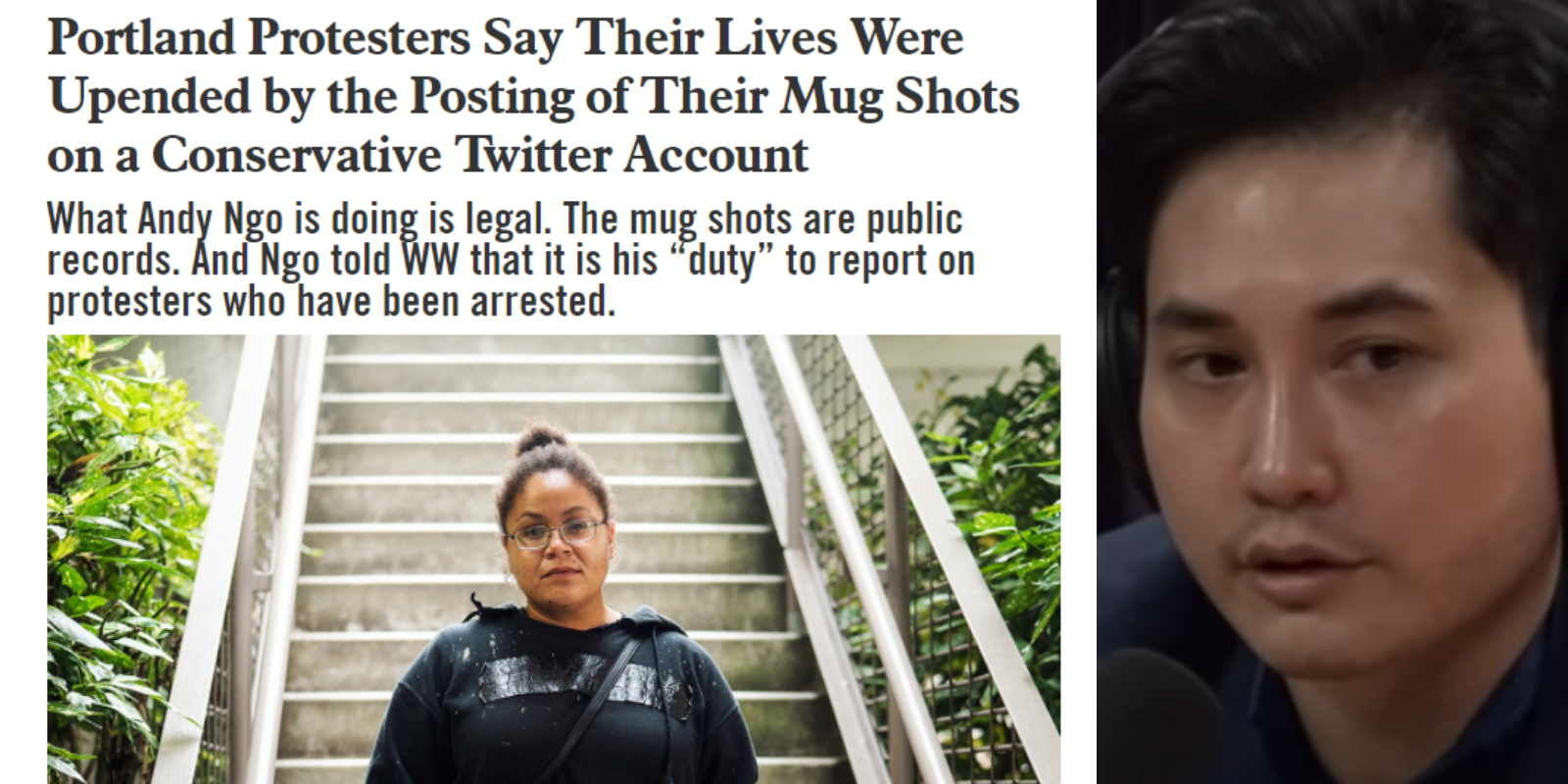 The article, titled "Portland Protesters Say Their Lives Were Upended by the Posting of Their Mug Shots on a Conservative Twitter Account," was published early Wednesday morning.

The author of the piece, Sophie Peel, acknowledged that The Post Millennial's editor-at-large's reporting is perfectly legal as Ngo cites archived booking information from the Multnomah County Sheriff's Office. Critics have accused Ngo of doxxing, although suspects have left a trail of their own digital footprints.

Peel reached out to Ngo via email ahead of the article's publication for comment, noting that the news outlet is in contact with six individuals whose criminally-linked information he had posted to social media.

"I believe my duty as a journalist includes informing the public about individuals who are believed by criminal authorities to be sufficiently dangerous to the public that they meet the standard for arrest," Ngo wrote in an emailed response.

Ngo contended that he is taking on criminals that other journalists are afraid to confront. "Given the risk that violence and riots present to the public, including journalists," he continued, "it is imperative that the press report fully on these matters."

"If you feel that transparency and public right to know should be outweighed by arrestee rights to privacy, this is a complaint for the legislature, not for journalists reporting in compliance with state and federal law," he stated. "A better question would be, 'Why do some journalists feel compelled to hide the identities of suspected criminals from the public?' Another would be, 'Whose interests does the suppression of criminal arrest data serve?'"

"If city officials like @JoAnnPDX are right that white supremacists are rioting in Portland, then we should know who they are," Ngo tweeted with screenshots of the correspondence.

On Aug. 7 when Antifa militants attacked the Portland Police east precinct for "Round 2," 30-year-old black activist Ragina Joe-Marie Gray was charged with disorderly conduct in the second degree, resisting arrest, and interfering with an officer. She was quickly bailed out.

"This is my f—ing neighborhood," Gray shouted at a line of law enforcement, calling the officers "terrorists."

Ngo listed Gray's charges while linking her case file, also writing that she is "frequently photographed with kids at protests and rants about white terrorism."

"He was sweaty and nervous looking, and he asked for Ragina by name," Gray's mom, Lucinda Fisher, told WW. "He mentioned [Gray's] son, and I noticed he had a gun in his hand." Fisher then slammed the door and reportedly called the police.

However, Peel admitted that "Gray has no direct evidence that Ngo's robust social media presence is the reason an armed man arrived at her mom's house."

Gray tweeted screenshotted text exchanges with her mother alleging the face-off at her residence.

Gray's children, ages 9 and 4, fear for their lives since she was arrested on the night when rioters assaulted two elderly women who tried to apprehend vandalism of the police building. The mother also brought her kids to the violent Antifa protests. On Gray's Twitter account, she calls herself the "Mom for the Liberation of all Black People."

"They're scared that someone's going to kill me," Gray stated on record to Peel. "My first instinct is to say, 'No, that's not going to happen.' But there's a huge risk."

Gray continues to protest as she deletes messages allegedly from "[m]ostly white men" hurling racial slurs and now calling her a terrorist.

Peel also detailed the stories of Portland couple Erin and Phillip Wenzel as the two started their evening on Aug. 14 "as they have more than 10 times before that," donning riot gear: full gas respirators, masks, and bike helmets.

Phillip sported a bulletproof vest as the frontline drummer charging the protests. Erin followed behind as a street medic toting a first aid kit.

That Friday night, Phillip was arrested when the duo were sandwiched between two lines of officers during a smoke-filled confrontation captured on camera "that shows several protesters cowering under yellow shields as cops push them to the ground," Peel described the scene illustrated in a video of the altercation with Phillip "shielding his face on the ground as a half-dozen cops tackle him."

Phillip was observed attempting to steal a baton from a police officer, Ngo provided context, as Antifa militants gathered his personal information to bail him out. "What's your name and we'll help you," an ally screamed.

Phillip was arrested, charged with assaulting a police officer, resisting arrest, interfering with police, and disorderly conduct. He was released the next day.

"The antifa man recorded resisting arrest & trying to steal a baton from police is 31-year-old Phillip John Wenzel, of Beaverton, Ore," Ngo tweeted along with his mug shot.

Ngo also posted Phillip's biography as a paralegal in the Portland-area practicing family law and estate planning as listed on the law firm sites of Gevurtz Menashe and Elizabeth Christy, noting that the suspect is a "hardcore advocate" of abolishing law enforcement and the Department of Homeland Security.

An additional video pictured Phillip unmasked and in handcuffs. "You guys are f—ing ridiculous. You're assaulting people in the street," he told authorities while on the asphalt.

The Wenzels then deactivated their social media accounts on Twitter, Instagram, and Facebook. Phillip shaved his beard to change his appearance and now wears a hat when he walks his dog.

"We've been lying low, and to be honest, we've been staying at home with the blinds closed," Phillip told Peel. "I can get over Twitter trolls, but what gives me the most pause is the one percent of them that have genuine threats."

The next day, Phillip received a voicemail on his cellphone from a Michigan resident named "John" who said, "I'll have you know I'm 7 foot and 280 pounds."

On Aug. 18, Phillip's boss sent him a letter informing him that law firm has received 50 threatening or harassing communications since his arrest.

"Because you have chosen to engage in activism that has resulted in violence, physical injuries, and negative publicity for [the law firm], there is now a major distraction from the business we are doing, a threat to my ability to gain new business, and a threat to our employees' safety," Phillip's employer wrote in an email provided to WW.

Three employees have also announced their resignation in solidarity last Thursday. Phillip would be terminated effective Sept. 16, the company told the paralegal in a letter the following day, citing a loss of work and a reduction in staff.

Peel then ventured on to tell the story of April Epperson, a staff member at a Northeast Portland public school, who was arrested and released without bail for disorderly conduct in the second degree and interfering with a peace officer on Aug. 24 when Antifa sieged the Portland Police's north precinct.

Ngo tweeted a side-by-side of her mugshot and Facebook profile picture with the Black Lives Matter frame. "Like others recently arrest[ed], she works with children at an elementary school," Ngo wrote. Then several Twitter users reportedly shared the name of the school.

On Aug. 29, an email arrived in her school inbox. Attached was a picture of a toad in a dress with the following text: "So f—ing bad— with your face covered? We can't wait to come to your employer and do the exact same f—ing thing you do to cops!" Epperson alerted the school.

Another email sent Sept. 1 from a secure email address included a screenshot of Ngo's tweet, reading: "This type of behavior seems a little unbecoming for a school teacher. Are standards any higher than this?"

"There's some legitimacy to a claim of informing the public. But we have a pattern with this individual that his interest is in provoking violent reactions and doxxing," says Gleason. "It's a particular subset of conservative Twitter, and he knows that's who he's talking to."

In Peel's initial inquiry to Ngo, she acknowledged that WW "recognize[s] that Mr. Ngo is within his rights to post public information. And we do not believe he has specifically encouraged this behaviour by others."