Psaki's claim that there are no Americans stranded in Afghanistan debunked

"I really have given up hope, given up on the hope of going to the airport," a woman told Fox News. "It's just not possible to make it through all those people." 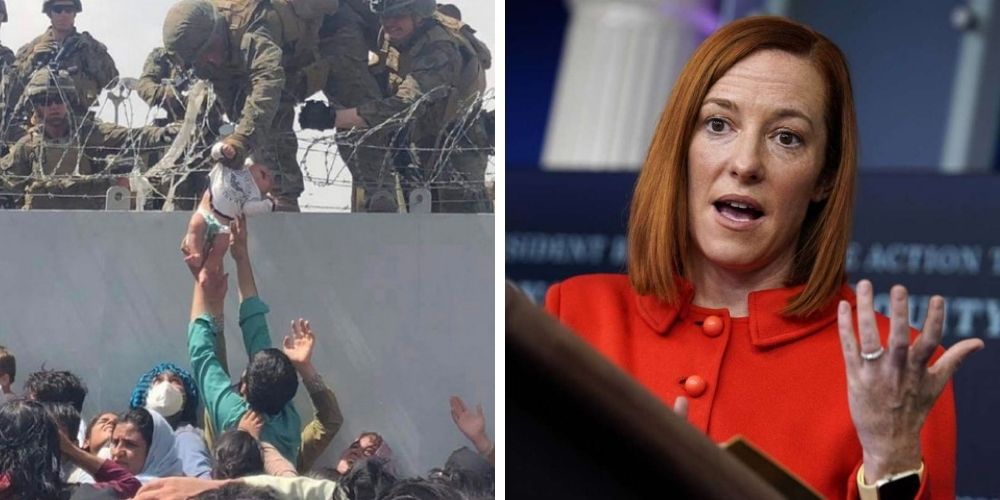 During Monday’s White House press conference, Press Secretary Jen Psaki unequivocally stated that no Americans are currently stranded in the troubled nation of Afghanistan. Yet her false claims ignore the stories of Americans stranded in Afghanistan. Fox News reached out to her office about one such American on Saturday, three days before she made this claim.

An American mother was reported by Fox News to be trapped in Afghanistan, fearing for her life and sheltering in place. She made multiple attempts to travel to the Kabul airport where evacuations are taking place. But these have been thwarted by Taliban fighters, despite the Biden administration stating that they were working with the terrorist regime to would let American citizens leave the country.

"I really have given up hope, given up on the hope of going to the airport," the woman told Fox News on Saturday, remaining unidentified due to concerns for her safety. "It's just not possible to make it through all those people."

Fox reported that they "had reached out to Psaki on Saturday about an American woman who described being trapped from reaching the Kabul airport. The White House never issued a response."

The woman is one of the many Americans trapped behind enemy lines that the Biden administration has said that they're having a hard time tracking. She told Fox News that there are as many as 20 Taliban checkpoints standing between her and the Kabul airport, where the US military is evacuating citizens.

During an attempt to get through one of these checkpoints, she said the Taliban whipped her. Another man standing near her was reportedly shot in the head.

As of Saturday, she was in hiding with her aunt, who is a former Afghan parliament member, her uncle, as well as a number of contractors and children.

The woman sent a 27-second audio recording to West Virginia Representative Carol Miller's office, where she can be heard sobbing as she spoke. "Hour by hour it's getting more difficult," she struggles to say. "Even when the cars pass by I feel like they're gonna stop at the door out there and the Taliban out there are gonna come in and kill us."

A separate message sent to Miller's office stated that the woman said she has "no hope" of ever seeing her children again.

Her husband told Fox News that the state department has been little help, and that they are communicating daily with Miller's office. The woman's husband and children are located in Virginia. They fear that an internet blackout could be imposed by the Taliban, blocking communications with those still stranded in Afghanistan. Her brother said if that came to fruition, the Taliban would "massacre of a lot of people."

On Monday, Fox News's Peter Doocy asked Psaki during the presser, "Most of the criticism is not of leaving Afghanistan, it's the way that he has ordered it to happen, by pulling the troops before getting these Americans who are now stranded."

"Does he have a sense of that?"

Psaki answered: "First of all, I think it's irresponsible to say Americans are stranded. They are not."

"We are committed to bringing Americans who wanna come home. We are in touch with them via phone, via text, via email, via any way that we can possibly reach Americans to get them home if they want to return home."

Doocy then asked, "'There are no Americans stranded in Afghanistan' is the White House's official position on what's happening in Afghanistan right now?"

Psaki's response was, "I'm just calling you out for saying we were stranding Americans in Afghanistan when I said when we have been very clear, that we are not leaving Americans who want to return home; we are going to bring them home. And, I think that's important for the American public to hear and understand."

Meanwhile, US Embassy officials in Afghanistan have ordered American citizens to shelter in place.