Brumbaugh said that Gutierrez-Reed "put the cast and crew in several unnecessary and dangerous situations." 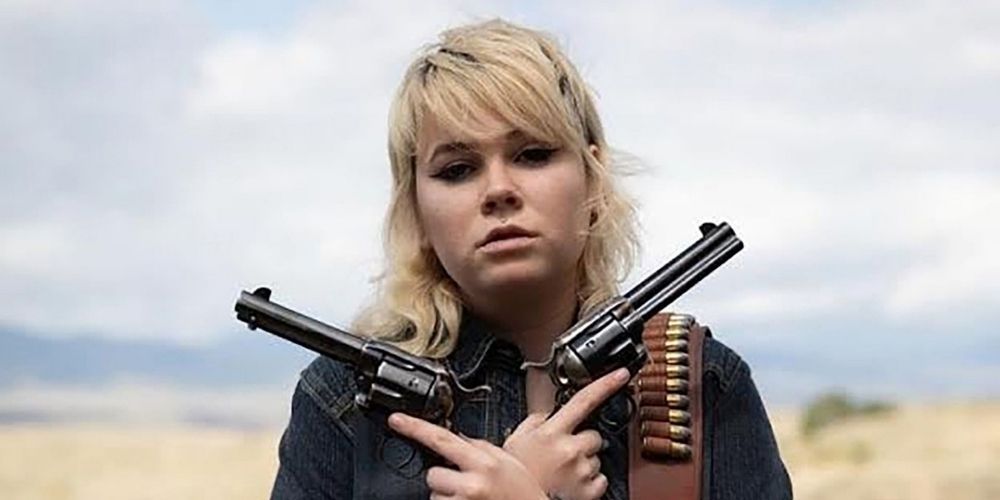 The head armorer on the set of Alec Baldwin's Rust, where a fatal shooting took place last week, has reportedly had a number of complaints lodged against her at the previous movie set she worked at, where crew members expressed concerns regarding her careless handling of weapons.

Key grip on Nicolas Cage's The Old Way, Stu Brumbaugh, told The Wrap that Hannah Gutierrez-Reed had infuriated Cage after firing a gun near the cast and crew without warning for the second time in three days.

"Make an announcement, you just blew my f—ing eardrums out!" Cage reportedly before storming off the set . "I told the AD, 'She needs to be let go.'"

Brumbaugh added that "after the second round I was pissed off. We were moving too fast. She's a rookie."

Brumbaugh only learned that The Old Way was Gutierrez-Reed's first movie once he alerted his superiors that the production needed an experienced armorer that wasn't making safety mistakes.

He and one other source on the set told The Wrap that Gutierrez-Reed  had also brought live rounds of blanks onto the set without alerting the cast and crew, and also walked around the set with pistols under her armpits, aimed back at people, while preparing to hand out guns for a scene.

Brumbaugh said that Gutierrez-Reed "put the cast and crew in several unnecessary and dangerous situations."

Leading up to the fatal shooting on the set of Rust, Gutierrez-Reed had admitted on a podcast that she felt she may not have been ready for the responsibility when offered The Old Way job.

"It was also my first time being head armorer as well. You know, I was really nervous about it at first, and I almost didn't take the job because I wasn't sure if I was ready, but, doing it, like, it went really smoothly," she said in September.

"The best part about my job is just showing people who are normally kind of freaked out by guns how safe they can be and how they're not really problematic unless put in the wrong hands," she added.

Brumbaugh blamed the shooting on movie producers who are hiring inexperienced people in vital positions to save money.

"The tragedy is it boils down to the producers," he said. "It's been happening more and more. As producers refuse to bring more experienced people because their rates are higher, they demand we take our time and (producers) don't want to pay it. So they hire a newbie who is energetic and wants the job and will do it with less people."

"The problem is she didn't have help. I would have had minimum two more people. She was doing everything by herself in that movie and on the other movie. If there was one more person in the other movie the tragedy wouldn't have happened. A second person would have inspected to make sure the barrels were clear," he added.

One unidentified producer of The Old Way stated that he had no recollection of the events with Cage ever happening.

"I have no such recollection of this event on our set. I asked my partners the same," they said.

Jeffrey Crow, the prop master who supervised Gutierrez-Reed on The Old Way, defended her in an interview with the Los Angeles Times.

"Working with Hannah, I'm surprised that any of this happened under her watch," said Crow. "I thought she was an exceptionally young, up-and-coming, very eager and talented armorer. She was without a lot of experience, but coming from her family lineage, I thought she was exceptional, professional, and I thought she had — I still think she has — many years of an amazing career ahead of her."

Crow said he was still "stymied" by the fact that Reed could have played a role in the fatal shooting on the set of Rust.

Gutierrez-Reed has also been revealed to have a role in the death of another person in 2020.

Gutierrez-Reed's friend, Tyler Dyer, was killed in a motorcycle accident back in August 2020. According to TMZ, that accident also involved her boyfriend, Aaron Butcher.

Dyer's father told TMZ that the three of them had been hanging out at a party leading up to the accident. Gutierrez-Reed reportedly told the police that she had seen Butcher and Dyer drink four or five beers each before she gave the keys to Ker motorcycle to Butcher.

At that point, Butcher was on probation for a DUI, and was only allowed to operate vehicles that had a breathalyzer fitted to the ignition. Gutierrez-Reed's bike did not possess that.

Dyer reportedly was going to fast when he made a turn and crashed his bike into a wall. Butcher tried to avoid him, and ended up wrecking Gutierrez-Reed's bike.

Dyer ended up dying in the wreck, and Butcher was arrested for aggravated DUI. Because Butcher was on Gutierrez-Reed's bike, her insurance company reportedly paid Dyer's parents $50,000 in exchange for an agreement not to sue Hannah in the future.