Schools to remain in closed in September—yet protests continue

Seattle Public Schools announced that full time in person learning is likely not an option for grades six or higher for the 2020-2021 school year. 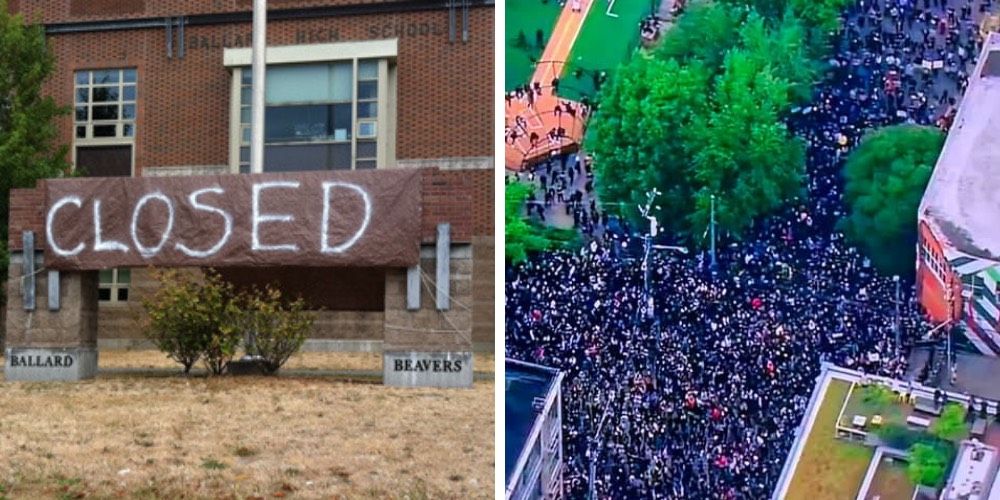 In May, the Washington State Office of Public Instructions outlined seven scenarios that were being considered for all learning, ranging from in person classes like any other school year, to only online classes. However, teachers in various districts around the state reported receiving phone calls from Teacher Union representatives telling them that the only viable option was full time continuous online learning 2.0 (option 7 in the document) through at least January 2021 and that in person classes would not resume until there was a vaccine for the coronavirus.

While some Washington State school districts have announced that they are preparing for full time in person learning for the fall, Seattle Public Schools presented the three scenarios for the fall they are considering.

Option 2: Students in all grades Pre-K-12 have an A/B schedule and receive part in-person learning and part remote learning.

Only option 1 includes any full time learning, and even then only for Pre K- 5th grade. The other plans do not include any full time learning. As previously reported, SPS was originally not planning on having any online learning when Governor Jay Inslee closed schools for the remainder of the school year in April.

This was because of equity issues. According to public disclosure documents, SPS reversed their position and began offering online classes when Amazon, Microsoft and other local tech companies offered technology for students.

Parents of SPS students have reported that the online learning is “a disaster”. This seems to be acknowledged in the OSPI document in option 6 “Continuous learning 1.0- Current model is not a viable approach for the 2020-21 school year"

Teachers have reported that a large percentage of students are not even showing up for class. The high truancy rate was revealed after SPS changed their grading system to “…require teachers to give all Seattle high school students either an A or an Incomplete in their courses for the duration of the COVID-19 health crisis.”

At the time, many parents also questioned the Governor’s decision to cancel in person class instruction in April for the remainder of the year without following the data showing that Coronavirus cases had already peaked in the state and that Washington had effectively “flattened the curve.”

Reaction came swiftly from SPS parents. Many asked how this decision could be made so early, especially in light of revelation that Washington State has been inflating the number of Coronavirus cases going so far as to count gunshot victims as Coronavirus related deaths.

Other parents pointed to a recent press conference where the Governor said that protestors demonstrating against the death of George Floyd should show their support “...with their feet and with their voices... as enshrined in the Constitution" while showing pictures of protestors standing shoulder to shoulder and not wearing masks.

This was contrary to what the Governor said in April in response to a Back to Work demonstration in Olympia: “...crowd counts or speeches won’t determine our course. This isn’t about politics. It can only be about doing what is best for the health of all Washingtonians.” Seattle Mayor Jenny Durkan tweeted:

Parents and pundits were quick to point out that if Coronavirus is no longer a threat to protestors or mass gatherings and that they were being encouraged by public officials, children should be allowed back in schools.

In May, the Tacoma school district sent a letter to “para educators” of special needs students instructing them to prepare for staffing reductions/lay offs and that “…traditional on site face to face school is not a viable option without dramatic changes to community transmission or a vaccine.”

Meanwhile domestic violence and addiction are up dramatically across the state and special needs children are falling behind in their progress due to lack of in person therapies and instruction. Parents of low income families and single parents that need to go to work and leave the kids alone all day, are concerned their children will not perform school work in their absence and will not get a full education. Teachers themselves are faced with the daunting task of managing a classroom as well as their own children who are learning from home.

As of print, King County, where Seattle is located, has still not applied for modified Phase 1 reopening as allowed by the Governor’s reopening plan which was scheduled to begin statewide June 1st, causing Washingtonians to speculate that King County officials are intentionally keeping people at home for political gain. 21 counties in Washington have applied and are already in Phase 2 or opening around the state.

Several Washington school districts originally announced online learning only for the 2020-2021 school year but reversed their position when faced with overwhelming parent resistance. It remains to be seen if Seattle parents will be successful in advocating for in person classroom instruction for the fall of 2020.