“Woke corporations thought they could help Patty Murray by BULLYING Tiffany with senseless legal threats. Their efforts have both failed and backfired," said Kristian Hemphill, Campaign Manager for Smiley for Washington. 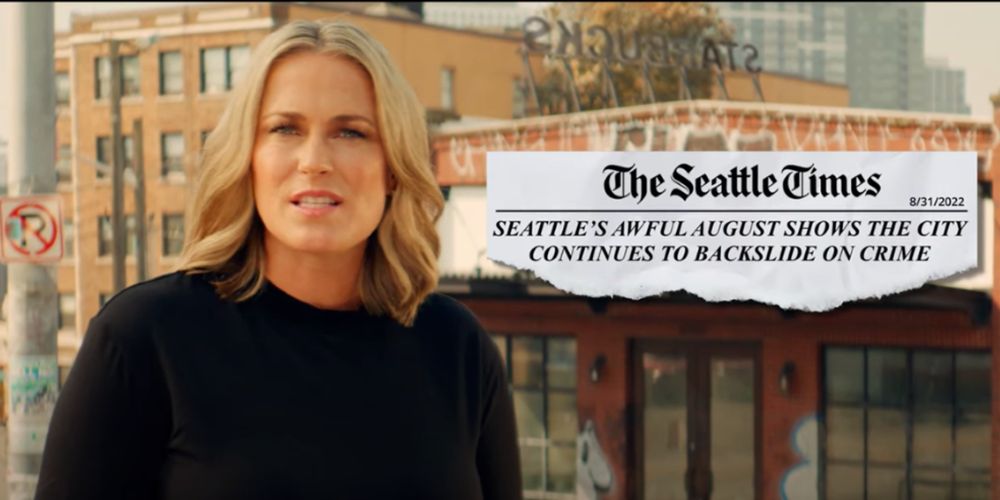 Ari Hoffman Seattle WA
Oct 2, 2022 minute read
ADVERTISEMENT
ADVERTISEMENT
Left-leaning media and corporate allies of the Democrats, including Starbucks and the Seattle Times, are growing so concerned about Washington Democratic Sen. Patty Murray’s re-election chances that they have turned their vast resources on her Republican challenger Tiffany Smiley. However, as a result, a complaint with the Federal Elections Commission has now been filed.

In a campaign ad for Republican Senate Challenger Tiffany Smiley called “Cup of Coffee”, Smiley is standing in front of one of 5 Seattle Starbucks locations shuttered by the coffee giant in response to crime and safety concerns. The remnants of the closed store’s Starbucks sign are barely visible at the top of the structure and viewed backward.

After the ad aired, The Seattle Times erroneously addressed a September 21 "Cease and Desist" letter to the “Jane Smiley” campaign, obviously not using a "fact checker," and demanded the removal of logos and story headlines used in the “Cup of Coffee” ad, claiming violations of copyright law for unauthorized use of its logo and content.

The Smiley campaign claimed that the outlet provided the Murray campaign with a prohibited in-kind contribution. According to the complaint, the Smiley for Washington campaign would have to spend an estimated $5,000 to remove and update the ad—“costs that Patty Murray does not have to accrue.”

The complaint cited FEC regulations stating, “if a corporation makes its resources available for free, it must do so for all candidates.”

According to a press release from the Smiley campaign, “Since corporate resources were used for arbitrary enforcement of its copyright claims, The Seattle Times clearly violated federal election law by providing a prohibited corporate in-kind contribution to Patty Murray’s campaign.”

The statement noted “fair use is intended to protect and promote freedom of expression, which … allows The Seattle Times to publish extreme leftist commentary and pretend that it is news” and while their “political affiliation may not align with Tiffany Smiley’s,” the legal claims made have “no merit."

Starbucks also sent a certified letter to the campaign claiming that Smiley appropriated its intellectual property and complaining the ad might “create an unfounded association in the minds of consumers between Starbucks and your campaign.”

The coffee giant demanded the campaign pull the ad or change it to remove the barely visible and backward sign and the Seattle Times headline referencing Starbucks.

The campaign refuted Starbucks' infringement claims in a legal letter sent Thursday, noting political speech protections and that no reasonable person would ever think a factual ad about shuttered
Starbucks stores amounted to a coffee-chain endorsement. The letter also suggested the coffee giant spend its vast resources focusing on its own problems, such as recent problems with unions.

Murray, the media, and corporate supporters are likely getting more desperate as a recent Trafalgar Group poll showed Smiley just two points behind Murray. Additionally, The Washington Post earlier this week gave 30-year incumbent "Four Pinocchios" for her false claim that if Republicans take back the Senate in the 2022 midterms they "plan to end Social Security and Medicare."

According to The Wall Street Journal, Senate Majority Leader Chuck Schumer appears to be concerned as well recently transferred $500,000 from his own campaign funds to Murray’s campaign.