"This is yet another example in which Democrats strain to conjure up a nonexistent GOP plan regarding Social Security and Medicare," according to The Washington Post. 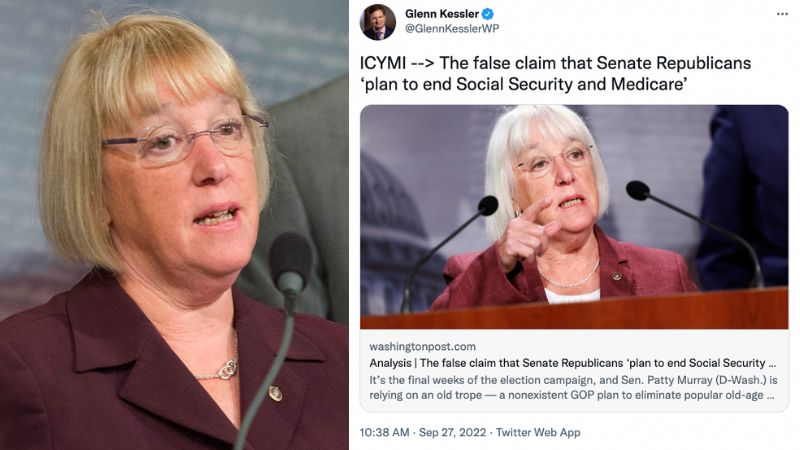 The Washington Post gave Washington Democratic Senator Patty Murray "Four Pinocchios" on Tuesday for her false claim that if Republicans take back the Senate in the 2022 midterms they "plan to end Social Security and Medicare."

The account for the campaign to re-elect the 30-year incumbent posted on Twitter "Republicans plan to end Social Security and Medicare if they take back the Senate. Washington seniors who have spent their lives paying into these programs deserve better—and I’ll keep fighting to make sure they get it."

According to the Washington Post, the main source of the false accusation is a document issued in February by Sen. Rick Scott (R-FL), chair of the National Republican Senatorial Committee, a 60-page "11-point plan to rescue America" that offered 128 proposals. This has also been used by President Joe Biden to claim that the GOP intends to end these benefits.

Included in a section on government restructuring, was one sentence which read, "All federal legislation sunsets in 5 years. If a law is worth keeping, Congress can pass it again."

Scott’s plan was rejected by most Senate Republicans including Senate Minority Leader Mitch McConnell (KY) who said on March 1, "We will not have as part of our agenda a bill that raises taxes on half of the American people and sunsets Social Security and Medicare within five years. That will not be part of a Republican Senate majority agenda."

According to the outlet, Scott’s write-up offered few details and had no proposed legislative language, and was issued by Scott's campaign committee, not any GOP or Senate committee. Scott has repeatedly denied that he wanted to end Social Security and Medicare.

During an interview with Fox News in March, Scott called the accusations about his plan "Democratic talking points" and added, "No one that I know of wants to sunset Medicare or Social Security, but what we’re doing is we don’t even talk about it. Medicare goes bankrupt in four years. Social Security goes bankrupt in 12 years. I think we ought to figure out how we preserve those programs. Every program that we care about, we ought to stop and take the time to preserve those programs."

Murray’s campaign appeared to be using the talking point not only to scare voters but to attempt to sabotage her Republican opponent Tiffany Smiley who is endorsed by Scott.

"This is yet another example in which Democrats strain to conjure up a nonexistent GOP plan regarding Social Security and Medicare. Murray earns Four Pinocchios," according to the Washington Post.

Murray is likely getting more desperate in her attacks on Smiley as a recent Trafalgar Group poll shows Smiley just two points behind Murray.

Last week, Smiley launched new commercials which tied Murray to the spiking crime in Seattle as well as closing schools in response to the pandemic which caused local mainstream media to spin for the Democratic incumbent.

She called out Murray for her false statements.

The Seattle Times wrote an editorial that smeared Smiley’s ads and ignored Murray’s record, but presented the piece as news calling the ads "an old GOP tactic" to "call out Seattle."

One of Smiley’s commercials was filmed in front of one of 5 Seattle Starbucks locations shuttered by the coffee giant in response to crime and safety concerns. The left-leaning outlet attempted to bury the statement from the company on the closures and the data on the spiking crime including an increase in the homicide rate in the city.

The Seattle Times also ignored footage from an internal meeting obtained by The Post Millennial that went viral which shows CEO Howard Schultz explaining in detail the safety concerns behind the closures. Instead, the outlet cited local Democrats mocking the Republican candidate.
ADVERTISEMENT
ADVERTISEMENT
murray wapo