"Mr. Wiener, why? Why? Why are you supporting a man who puts rapists in women's prisons?" she asked as staffers and friends of the politician attempted to block her way. 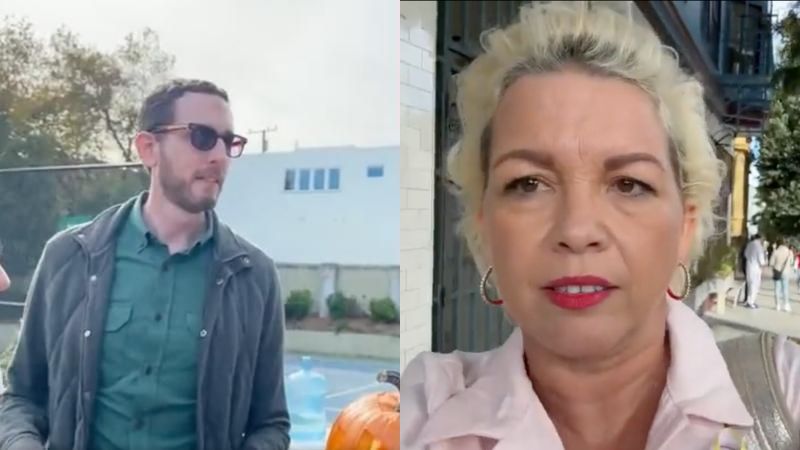 "Why do you got male rapists in women's prisons," the British activist yelled at Wiener, who prompted a federal lawsuit against the California Department of Corrections and Rehabilitation when four incarcerated women objected to being housed with transgender-identified male convicts.

One of the plaintiffs alleges that she was sexually assaulted "by a man transferred to her unit under SB 132." Two others, one devout Catholic and another Muslim, claim that "being placed in an intimate setting with unrelated men" (in the former case) and that being "housed in facilities with men" (in the latter case) violate their religions, according to the Bay Area Reporter.

Wiener walked away, but Jeen and her supporters followed.

"Mr. Wiener, why? Why? Why are you supporting a man who puts rapists in women's prisons?" she asked female staffers or friends of the politician who attempted to block her way. She and other protestors then decried his promotion of puberty blockers and transgender surgeries for children.

"He sterilizes children… Why have you made this state somewhere you can come and get a double mastectomy at 13? No accountability, shame on you!" Jeen yelled.

Other protestors could be heard yelling "Shame!" and "How much money do you get from Pharma!?"

On Wednesday afternoon, Kellie-Jay Keen was forced to stop her Tacoma, Washington "Let Women Speak" tour stop early, after far-left students from a nearby school descended upon the venue. A woman was injured during the violence.

Keen's Tacoma stop on her US tour comes after she was forced to cancel her stop in Portland after threats of violence were made by Antifa members in the area.

Keen told The Post Millennial at the time, "I was alerted to multiple threats of violence against me as well as a local principal lying and saying I had links to the far right. I am relatively well known by name and sight to these violent, unhinged ideologues. The police have confirmed that they are too short-staffed to be reliable."

One Twitter user posted video of a recent clash at a "Let Women Speak" which saw a counter protestor try to spit on a woman attending the event.