"DOJ, in the same way that it is setting up a task force to investigate oligarchs, should look into people who are Russian propagandists and shilling for Putin." 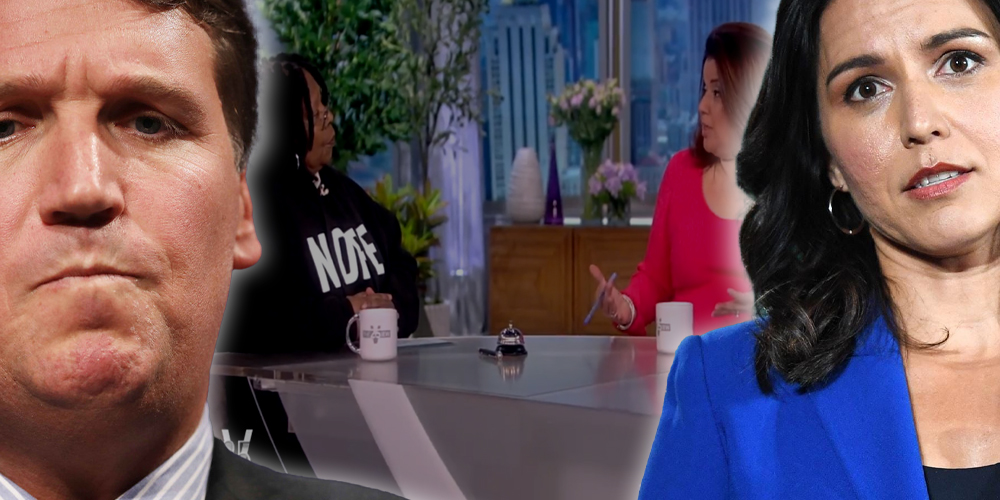 The co-hosts based their suggestions on a recent story that cites a "leaked war memo" on the Russian side, suggesting the country's state media outlets play clips of the Fox News personality's commentary as much as possible.

As for Gabbard, Utah Senator Mitt Romney accused her over the weekend "of parroting false Russian propaganda. Her treasonous lies may well cost lives."

It's co-host Ana Navarro who brings up federal intervention, first.

"DOJ, in the same way that it is setting up a task force to investigate oligarchs, should look into people who are Russian propagandists and shilling for Putin. That being if you are a foreign asset to a dictator, it should be investigated," she said.

Navarro trails off and begins questioning Gabbard's relevancy since she's no longer a presidential candidate or in Congress. "The View" host touts that the talk show is giving Gabbard "oxygen" again.

Whoopi Goldberg picks up her co-host's train of thought:

"They used to arrest people for doing stuff like this. If they thought you were colluding with a Russian agent, if they thought you were putting out information or taking information and handing it over to Russia, they used to actually investigate stuff like this, and I guess now, you know, there seems to be no bars and people are not being told to hate Putin," she stated.

She thought that Russian President Vladimir Putin's invasion of Ukraine would've been enough by default for the country's leader to be hated, internationally.

"So what they're parroting, what Tucker Carlson parrots every night on Fox News, what Tulsi Gabbard is spreading, is actually helping Putin get away with criminal acts against innocent Ukrainian civilians. It's horrifying."

Sunny Hostin painted Carlson as a stooge of the Kremlin who was giving Putin talking points on a silver platter: "I guess for me, the question is, what is in it for someone like Tucker Carlson, right? Is it money? Who's paying him that money? I'm not making any allegations. But it's just it doesn't make sense that he would do this kind of thing. I mean, he also says that the United States helped encourage the Russian invasion. He said the United States engineered a coup in Ukraine in the name of democracy. He, as we just mentioned, confirmed these Russian claims about bio weapons. And he's characterizing this situation as a border dispute."

Hostin then makes a reference to "The View" producers, saying the show's production could fact-check her claims in real-time as needed.

The latest attention on the topic started when Gabbard posted a video on Twitter discussing the fact that there's biolabs in Ukraine. In it, she stressed the harms of these locations being situated in an active war zone amid the Russian invasion.

Gabbard's main point was stressing the need for a ceasefire.

Romney responded: "Tulsi Gabbard is parroting false Russian propaganda. Her treasonous lies may well cost lives." To which, it led Gabbard to reply at greater length, sticking to mainstream sources when explaining her point of view.

It was back on Friday that "The View" panel came to a general consensus that criticisms of a laughing fit by Vice President Kamala Harris during a press conference with the Polish president were rooted in "racism" and "misogyny."

In recent days both "The Daily Show" comedian Trevor Noah and late night talk show host Bill Maher have questioned the credibility of the Biden administration on the international stage, given the Russian invasion of Ukraine.