"Tell me then whether or not you will continue financing for oil refineries, because right now it is morally unacceptable," Tlaib told the bankers. 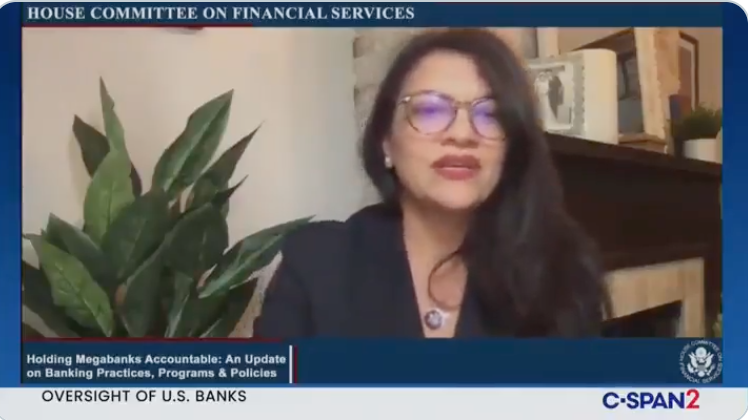 Rep. Rashida Tlaib (D-MI) wants to hold megabanks accountable to racial equity. Tlaib asked gathered CEOs of banks "Do you know what environmental racism is? Yes or no." She said this as though "environmental racism" is actually a thing.

Tlaib asked this question in her capacity as a member of the House Committee on Financial Services.

She asked the CEO of Wells Fargo "Do you know what environmental racism is?" He did not. "That's unfortunate," she said, then continued issuing this test. Next up was Goldman Sachs.

"Well, I want you all to know environmental racism showed its face in a deadly way during the pandemic in my district," Tlaib said. She said "More of my black neighbors died at a higher rate from COVID than any other community in Michigan."

"The preexisting health conditions that come from living in the backyard of corporate polluters, financed by your banks. When it comes to racial justice, I see many of you having these commitments to diversify your executive ranks. Good!" She said.

But what she wanted to know was "what actions" these bankers would take to invest in communities like hers, that said the banks "all profit from." Tlaib believes the American people want to know the answer to this.

Her issue with the bankers is that they have given loans and financing to fossil fuel companies that have then caused pollution. She did not mention that the emergence of fossil fuel coincided with a drastic reduction in rates of global poverty.

"All of you collectively financed $977 billion worth of fossil fuel projects and infrastructure projects since the Paris Agreement," she said, and took issue with the funding of Marathon Petroleum, which operates in Michigan.

Marathon has implemented many policies to reduce their environmental impact. It operates the only petroleum refinery in Michigan, and employs more than 500 Michiganders. Tlaib doesn't approve of Wells Fargo having given financing to that company due to air pollution caused by that refinery.

"I need you all to address racial equity," she said. "What that means is understanding environmental racism and reducing decades of it and halting the damage that you all continue to invest in." She invited the bankers to her district.

"Tell me then," she said, concluding her lecture to the banking CEO's, "whether or not you will continue financing for oil refineries, because right now it is morally unacceptable. If you truly believe in racial justice, then you would make sure that you and your team understand environmental racism in our country, that has been a term used by black and brown communities since the 70s and 80s."