Toronto Police have released artists renditions of a man who is believed to be behind three sexual assaults in the Toronto-Collingwood area between 2015 and 2019. 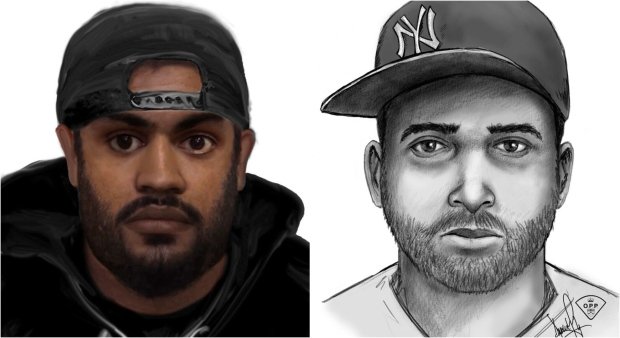 Toronto Police have released artists renditions of a man who is believed to be behind three sexual assaults in the Toronto-Collingwood area between 2015 and 2019.

Police say the incidents are “escalating in violence” and investigators are asking for the public’s help in identifying him.

Police say the first alleged assault occurred during the summer of 2015, on July 28 at around 1 am in the Rogers Road-Dufferin area.

The victim was a 23-year-old woman, who was dragged into an ally and sexually assaulted.

According to police, the alleged rapist claimed he had a weapon, though no weapon was visible to the victim.

A DNA profile was collected by police, but no match was found in their database.

The second alleged incident took place on New Years Day 2017, near Birch and Second street in Collingwood, where a 17-year-old girl was forced into a vehicle and sexually assaulted. Similar to the previous incident, the man claimed he had a weapon, though no weapon was seen.

Once officers ran a DNA test, they were able to identify a match between this crime and the one from years prior.

Police say this incident was “markedly more violent” than the 2015 attack.

The third sexual assault occurred in July of 2019.

According to police, a 28-year-old woman ordered a ride-sharing vehicle to her location. Due to the nature of ride-sharing, predators in unmarked vehicles can pretend to be drivers. That is exactly what happened last month.

Police say the woman was then brought to a Jane and Eglinton parking lot, and was sexually assaulted.

It’s believed that the man sustained some type of injury to his eye during the third incident.

The suspect is described as being 25 to 35 years old, with brown skin and is somewhere between 5’5 to 5’9. He’s believed to have a small frame, and a thin beard. His vehicle has been described as a four-door silver, grey, or black high-end vehicle.

Toronto Supt. Pauline Gray reminds citizens to stay vigilant and to never assume that it’s not someone you trust.

Investigators ask that anyone working in a hospital, clinic, doctor’s or optometrist’s office or pharmacy that may have encountered someone with similar description and injury on July 16 or later to contact police at 416-808-7474 or do so anonymously through Crime Stoppers at 1-888-222-TIPS.