Canadians furious as Trudeau breaks his own coronavirus travel rules

Prime Minister Trudeau was caught breaking his own rules about "non-essential travel" after photos were posted of him and his family at their chalet in Quebec. 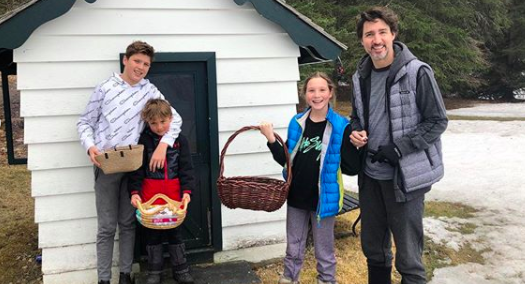 Prime Minister Justin Trudeau has come under fire after his wife, Sophie Gregoire Trudeau, posted photos of the family at their chalet in Lake Harrington, Quebec. The angry response to the Prime Minister comes because he is not practicing what he has preached in regards to forbidding Canadians from all ''non-essential travel."

The trip involves crossing the provincial border of Quebec and Ontario, which is another action Canadians have been told they are not to do. Police blockades were set up at the Ottawa/Gatineau border last week to bar anyone from entry in either direction that isn't related to a medical necessity.

Health Canada and PHAC tweeted out on April 10, to tell everyone to remain home over the Easter holidays.

A message that relates even more to Prime Minister Trudeau's particular actions comes from Canada's Chief Public Health Officer, Dr. Theresa Tam, urging all cottagers to stay home and refrain from going to their cottage over the Easter weekend.

There have been a blitz of fines being issued out to Canadian citizens for social distancing infractions of one form or another, such as being a car together, kids playing in the street or businesses that are deemed 'non-essential' that remain open.

Trudeau's weekend getaway to the chalet in Lake Harrington would have been a trip that also required security and staff to accompany the Prime Minister and his family, putting further people at risk.

Candice Malcolm tweeted, "How come so many Canadian journalists rush to defend the Prime Minister, who is clearly breaking his own rules? Is that really the role of a journalist?"

One Twitter user wrote, "The common folk can get a fine for visiting their family,"I am missing my family terribly but abide by the stay at home rules,"

Another Twitter user posted a photo of the Lake Harrington chalet and wrote, "This is where Trudeau is heading; yes it's in Quebec so he must be stopped by RCMP and Quebec Border Patrol and turned back due to fact it's NON ESSENTIAL TRAVEL PERIOD."

Perhaps if you are going to break your own rules, don't post evidence of it on social media.