"He literally just (said) all lives mattered," an employee added in Slack during the all-hands meeting on Thursday, seemingly disgusted with their new boss. 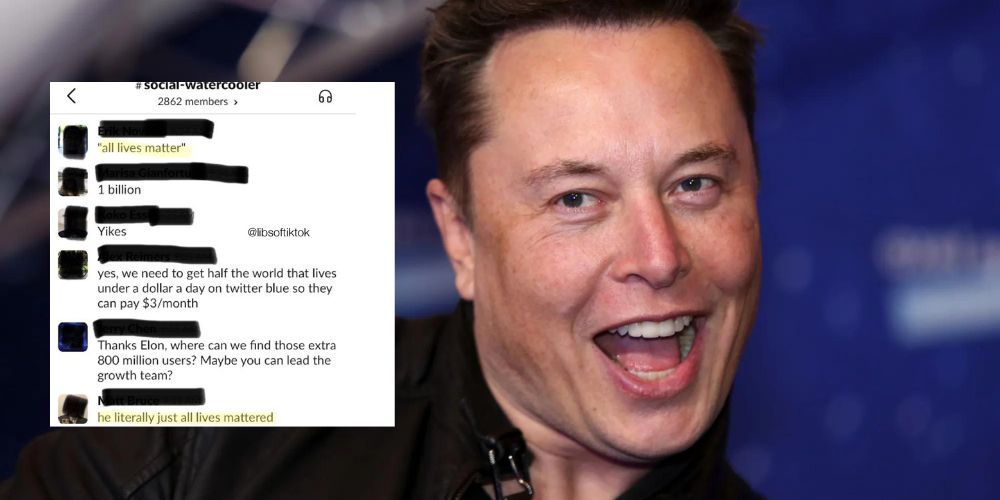 Apparently not "all lives matter" for employees at Twitter. According to the latest internal chat leaks, employees were triggered by Twitter's new head honcho Elon Musk saying the inclusive phrase during a companywide meeting on Thursday.

As the SpaceX and Tesla CEO addressed the company for the first time since the buyout in a virtual all-hands meeting, Twitter employees were communicating their thoughts on Musk's remarks through the messaging channel Slack.

The leaked chats posted to Libs of TikTok's Twitter account reveals that employees were particularly triggered by Musk saying, "all lives matter," which to far-left activists is a phrase of oppression that symbolizes white supremacy.

"All lives matter," an employee said in the chat, expressing disconcertment as they quoted Elon Musk.

"He literally just (said) all lives mattered," another employee added, seemingly disgusted with their new boss.

Since the announcement of tech billionaire Elon Musk's purchase of the social media platform for $44 billion on April 25, Twitter employees have mentally "broken down" over the acquisition, expressing concern about future changes to the "company culture."

Previous internal Slack messages show employees having meltdowns over the change in ownership.

Musk bought the platform after expressing concerns over Twitter's extreme bias against conservative users in an apparent effort to ensure that all individuals on the site have the opportunity to express their viewpoints without being censored by Twitter employees that have differing views.

"Free speech is the bedrock of a functioning democracy, and Twitter is the digital town square where matters vital to the future of humanity are debated. I also want to make Twitter better than ever by enhancing the product with new features, making the algorithms open source to increase trust, defeating the spam bots, and authenticating all humans," Musk said in a statement following the acquisition.

However, the acquisition has not yet gone through as Musk has reached a set of roadblocks since the April announcement. Musk has threatened on multiple occasions to pull out from or postpone the deal, with the Tesla and SpaceX CEO requesting in May that the platform prove that less than 5 percent of the platform's users are bot accounts.

In June, an attorney for Musk sent a letter to Twitter requiring that the company provide these figures before the deal would go through.

"At this point," attorney Mike Ringler wrote. "Mr. Musk believes Twitter is transparently refusing to comply with its obligations under the merger agreement, which is causing further suspicion that the company is withholding the requested data due to concern for what Mr. Musk's own analysis of that data will uncover."

According to The Verge, if work on the Twitter buyout deal continues, it's expected to take around six months to close on the offer.