"I mean we successfully deplatformed Trump - I don't think deplatforming Libs of TikTok is going to cause a mass exodus but I guess it may not be in our 'fiduciary' interest to enact a ban on a high profile account right now...," 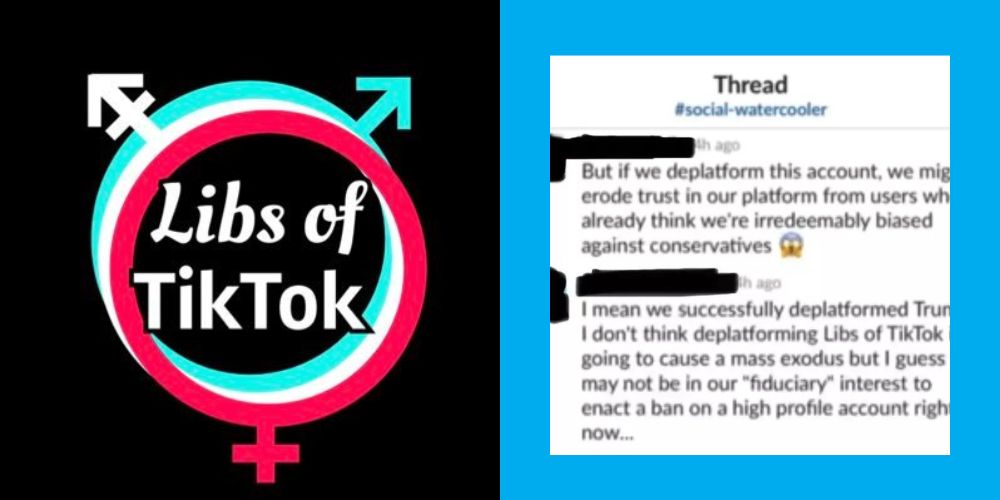 Libs of TikTok, the Twitter account dedicated to reposting videos and events from left-wing activists, has been suspended from Twitter three times and is now facing a potential permanent ban according to the leaked internal Twitter chats.

The Twitter employees, who appear to be far-left activists based off of their internal discourse, said that Libs of TikTok should be permanently banned for encouraging violence against marginalized community members–a common accusation expelled by far-left activists.

"This has been escalating for months...but our expectations out of twitter are so low right now that the devil himself is having to squat to get to their level," a Twitter employee said on Slack.

Employees furthered their debate about deplatforming Libs of TikTok but questioned if the decision would reveal the company's bias against conservative users.

"But if we deplatform this account we might erode trust in our platform from users who already think we're irredeemably biased against conservatives," an employee stated.

Another employee then responded to the discussion bragging about how Twitter "successfully" deplatformed former president Donald Trump following the Jan. 6 riot at the US Capitol in 2021.

"I mean we successfully deplatformed Trump - I don't think deplatforming Libs of TikTok is going to cause a mass exodus but I guess it may not be in our 'fiduciary' interest to enact a ban on a high profile account right now...," another employee said in regards to the potential buyout from Space X and Tesla CEO Elon Musk.

Employees say that Libs of TikTok, who frequently exposes inappropriate behavior from within the LGBTQ community through using their own videos, is trying to enact genocide against the trans community.

"Trans people are being targeted for genocidal violence during pride month," an employee wrote.

Another employee responded and said, "I despise and despair the activity that is currently flourishing on our platform and empowering white supremacists /fascists to act with impunity in conducting harmful emotional and physical violence on trans folx and the broader LGBTQ+ community."

The internal chats were first published by Libs of TikTok on Substack Monday night where they stated that they confirmed the identities and employment of all individuals in the group message before redacting their names and photos.

The discussion for a potential ban came mere hours after Media Matters employees took to Twitter to say the Libs of TikTok account was going to be responsible for the death of LGBTQ+ individuals. Ari Drennen, the LGBTQ Program Director for Media Matters posted a series of tweets attacking Libs of TikTok account and the woman who runs it, Chaya Raichik. "Chaya Raichik of Libs of Tik Tok is going to get someone killed," Drennen said.

Drennen accompanied the post with news of a Drag Queen Story Hour being protested in San Francisco. Drennen didn't stop there and claimed Libs of TikTok is "hard at [work] making sure that far right militias have their next target."

"This right-wing lady is inciting violence," added Drennen in her Twitter rant. Drennen has also retweeted and amplified other journalists calling Libs of TikTok’s actions "terrorism," and claiming that the content posted by the account is "trying to spark a genocide."

Media Matters has written four hit pieces on Libs of TikTok in recent months but has ramped up its efforts to get the account nuked by attempting to pin the account to acts of harassment and violence, despite Libs of TikTok only reposting content and provided limited, if any, commentary.

Following today's onslaught from Drennen and others, Libs of TikTok reported receiving death threats en masse, including one individual saying they sent a pipe bomb to Libs of TikTok for "supporting nazi bigots," and "please kill yourself at your earliest convenience."

Many users have been trying to reach Elon Musk about the potential ban, as Musk previously admitted the suspension of the Babylon Bee was a motivating factor in his decision to buy Twitter. The CEO of the Babylon Bee, Seth Dillon, has been a staunch supporter of Libs of TikTok and pushing back against the hits from Media Matters in a series of tweets.