Two men identified in the robbery of a Vancouver senior

Anyone with information about Szalay’s whereabouts is asked to call 9-1-1 immediately. Anonymous tips can be made to Crime Stoppers at 1-800-222-8477. 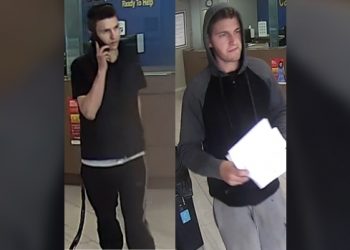 Two Richmond men have been identified in connection to an East Vancouver robbery last month.

Following an investigation, Duncan McCaffery Fowler, 25, and Coleton Reid Szalay, 23, have been charged for allegedly robbing an elderly person on Commercial Drive.

Vancouver Police have identified two Richmond men in connection to a robbery of a senior in East Vancouver last month.

Officials are looking for Szalay, who is now wanted on a Canada-wide warrant.

Fowler was arrested in Richmond on May 23 and has since been released pending his next court appearance.

The two men were identified after the Vancouver Police department released video of the two suspects in the robbery of a 77-year-old Vancouver man.

Upon leaving a payday loan store near Commercial and North Grandview Highway, the elderly man was robbed around 4 p.m. on April 28.

After watching the man withdraw hundreds of dollars, they knocked the elderly man down in a grocery store, where they ten took his wallet, cash, and ID, giving the man non-life-threatening injuries.

Anyone with information about Szalay’s whereabouts is asked to call 9-1-1 immediately. Anonymous tips can be made to Crime Stoppers at 1-800-222-8477.