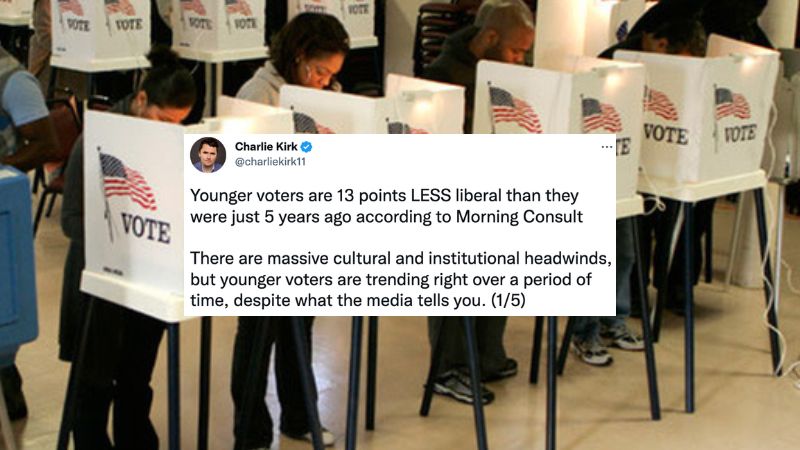 Recent polls show that younger voters, a demographic whose favor is chased by Democrat political candidates, have grown less liberal over the last five years.

Turning Point USA founder Charlie Kirk posted, "Younger voters are 13 points LESS liberal than they were just 5 years ago according to Morning Consult. There are massive cultural and institutional headwinds, but younger voters are trending right over a period of time, despite what the media tells you."


"In 2008, voters under 30 voted for Obama by 34 points. In 2022, voters aged 30-44 — the same group of people — voted Democrat by just 4 points. Breaking the liberal stranglehold on young voters is difficult and takes time. But it is happening," Kirk added.


The details gleaned by the 2022 exit polls posted by CNN offer details into the losses, as Kirk describes "According to CNN exit polls, today's 18-29 year-olds broke for Democrats by 28 points two weeks ago. That's a 6 percent improvement for Republicans since 2008."

"Even more interesting, 18-24 year-olds were 4 percent LESS likely to vote Democrat than 25-29-year-olds in this year's midterms," Kirk added.


The drop in younger voters going for Democrats was reflected in a New York Times/Siena College poll released in July that showed only 1 percent of voters between 18-29 years of age "strongly approve" of Biden's performance. 18 percent of that demographic "somewhat approve."

Morning Consult has been conducting a survey since 2017 tracking the identification of voters and finds "the share of the electorate identifying as 'very liberal,' 'liberal,' or 'somewhat liberal' on a seven-point scale has dropped over the past five years, from 34 percent to 27 percent."


The outlet did not find that the drop tilted significantly in favor of conservatism.

Conservatives have made significant gains in the Hispanic community as recent polls show Democrats lost 50 percent of Latino support over the last 10 years.
ADVERTISEMENT
ADVERTISEMENT
N/A by N/A is licensed under N/A