Telemundo Poll: Hispanics have made 21 point shift to GOP since 2012

The poll's results show that in 2012, Hispanics preferred a Democrat led congress over Republicans by 42 points. By 2022 that difference dropped to 21 points. 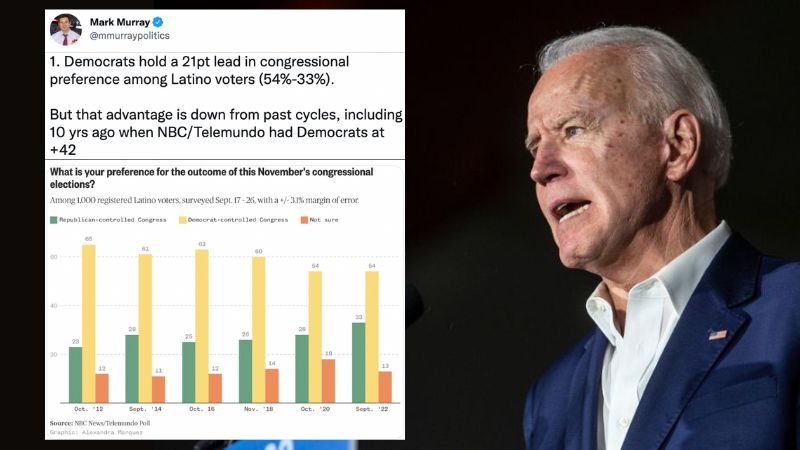 Mark Murray from NBC News tweeted out the poll's results which show that in 2012 Latinos preferred a Democrat-led Congress over Republicans by 42 points. By 2022, that difference dropped to 21 points.

Latino voters still prefer the Democrat party by a margin of 54 to 33, but the curvature from 2012 to 2022 consistently shows Democrats shedding Latino support in favor of the Republicans.

This data supports a previous poll by the New York Times/Siena College which shows a political realignment as Democrats solidify mostly support amongst college educated whites and are hemorrhaging support among working class minorities.

A Quinnipiac poll released in 2021 showed the heavily Hispanic region of South Texas continued to have less and less confidence in the Biden administration and support was turning to the GOP.

First Lady Jill Biden spoke at the "Latinx Incluxion Luncheon" in July, where she praised the Hispanic community for its diversity, which she called "unique as the breakfast tacos" in San Antonio.

In 2021, a poll found 40 percent of Hispanic voters consider the term "Latinx," so often used by Democrats, offensive and 30 percent said they would be less likely to support a politician or organization that uses it.

The victory demonstrated the growing popularity of the Republican party among Latino voters in the traditionally Democratic South Texas.  Flores, who had 51 percent of the vote to Sanchez's 43 percent when the race was called, will become the first Mexican-born congresswoman to serve in the House.
ADVERTISEMENT
ADVERTISEMENT
LatinoPoll