According to WaPo, "Children’s has not disputed the authenticity of the recording but said the employees provided inaccurate information." 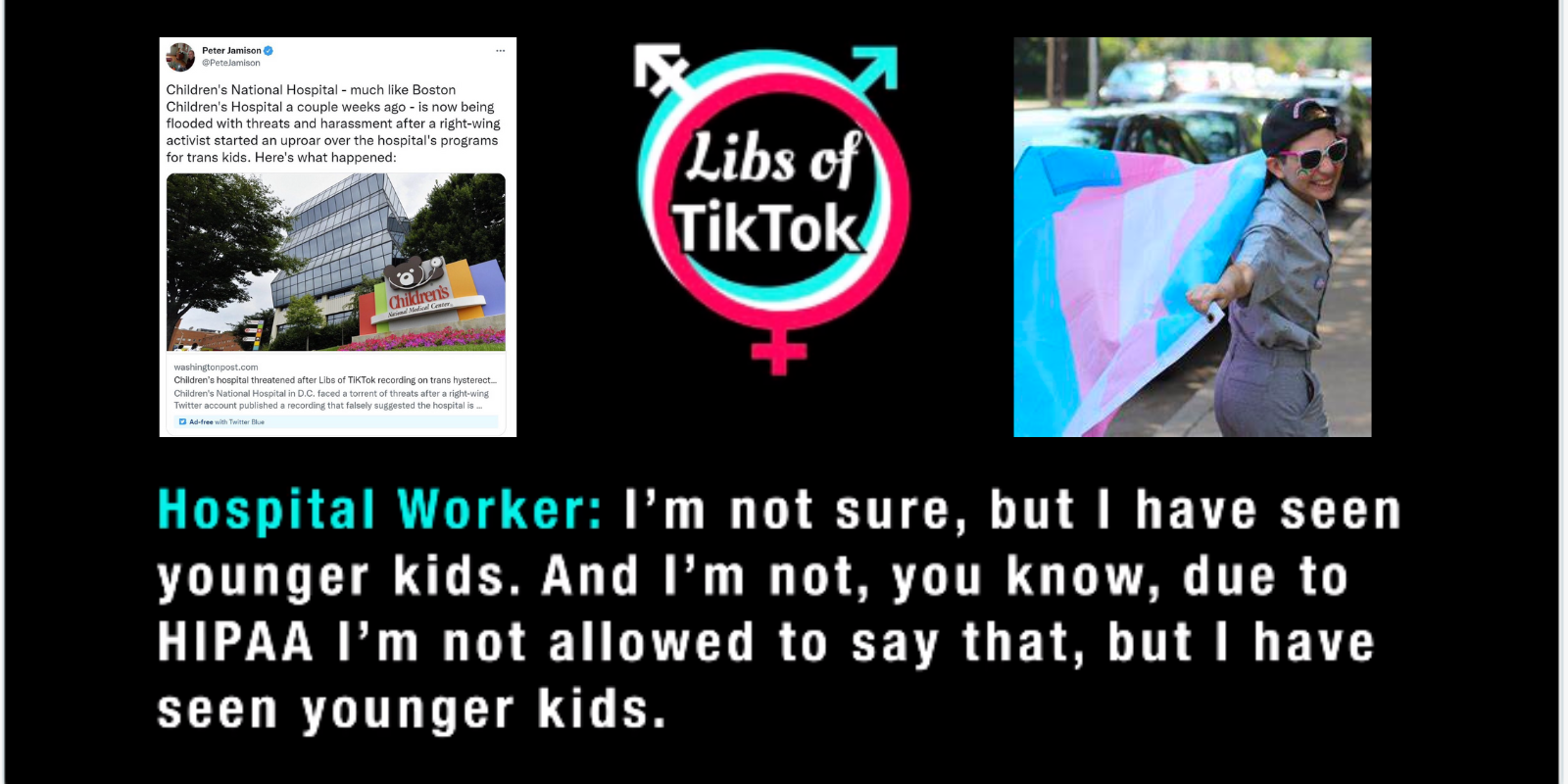 The Washington Post published an article on Friday that claimed the "renowned" Children's National Hospital in Washington, DC had received a "torrent of threats" after Libs of TikTok's founder Chaya Raichik outed the hospital for performing mutilating surgeries on minors under the guise of "gender affirmation" treatment. This article mirrors one run by NBC claiming that the evidence showing that Boston Children's Hospital was engaging in similar practices was simply meant as an anti-trans attack.

According to WaPo, "Children’s National Hospital has been inundated with threatening emails and phone calls" because Raichik "published a recording that falsely suggested the hospital is performing hysterectomies on transgender children." This statement is false and evidences the "Democracy Dies in Darkness" paper's vulgar abdication of objectivity and choosing instead, as the Christian Post writes, to "genuflect before the American state religion of LGBTQ dogma."

Late last week, audio released by Libs of TikTok revealed that Children's National Hospital was, in fact, performing hysterectomies for the purpose of so-called "gender affirmation," and removing the healthy uteruses of girls aged 16 and perhaps even younger.

Raichik called the hospital under the pretense that she was looking for a "gender affirming" hysterectomy for a healthy 16-year-old girl who identifies as trans. The three minute audio clip saw Raichik navigate the hospital's circuitous call line until she spoke with a nurse who gave her a straight answer that yes, this kind of surgery could be performed.

"Well he transitioned to a male," Raichik told the healthcare worker. "You know he already had the top surgery and now we're looking for the hysterectomy."

"Okay. Beautiful," the hospital worker responded along with some clarifying detail.

"Okay. So they would do it for that age?" Raichik asked, seeking absolute confirmation.

"Okay great. Is it a common procedure that you guys do for that age?" Raichik probed, to which she received another "yes."

"Just out of curiosity what's the youngest age you do it on?" To which the nurse said "I'm not sure, but I have seen younger kids."

According to WaPo, "Children’s has not disputed the authenticity of the recording but said the employees provided inaccurate information."

After Raichik's audio was released, the hospital began denying that they performed the surgeries on minors and made changes to their website to reflect their lie. Libs of TikTok posted the receipts on Twitter and showed a screenshot from their "Specialized Gynecology Care for Children and Trans" webpage. Children's National had made changes.

Prior to Raichik's expose, the website stated "The following services are available for patients between the ages of 0-21," and the fourth main bullet read "Gender-affirming medical care and gender-affirming hysterectomy."

WaPo claimed that "Children’s National officials admit that some information put out by the hospital has increased public confusion" and said the information taken down overnight was erroneous to begin with.

The newspaper apparently reached out to Raichik for an interview, which she agreed to, but they published their article anyway without speaking to her. They claimed that she "expressed outrage on Twitter" for correctly noting that it's poor journalism to ask for an interview and then publish a piece before the respondent says anything.

The Washington Post article also tacitly, but still falsely, claims that "experts" say the "procedure is almost never offered to children" writ large in America. (It should be noted that such a statement is not a denial that the surgeries happen on minors.)

WaPo sites Dr. Loren Schechter, "director of gender affirmation surgery at Rush University in Chicago" who said that in his 23 years of practice he had only seen one mutilating surgery done on a child and that they are rare because "they're complex decisions."

In their article "Yes, trans surgeries are being done on minors. Here's proof," the Christian Post's Brendan Showalter aggregated a comprehensive list of mainstream medical articles documenting the numerous examples of vaginoplasties, double mastectomies, and hysterectomies that have been performed in America on healthy youth who identify as transgender.

The Washington Post also covered for Boston's Children's hospital, falsely claiming the institution didn't perform the surgery on anyone under 18 and said Libs of TikTok "targeted" the healthcare facility. In that case the hospital itself published a video practically bragging that they performed the grotesque procedures on children. This was one of many videos of their providers discussing surgeries and drugs that are applied to teens seeking medical treatment for gender dysphoria.

Further, their application forms for genital surgery state that biological boys seeking "vaginoplasty" must be 17, biological girls seeking hysterectomy and phalloplasty 18, and girls seeking "chest reconstruction," or double mastectomies of healthy breasts, must be 15, though there's wiggle room if the request has parental approval.

WaPo stigmatizes those who disagree with them, saying they express "furor," when they are simply performing the type of reporting the paper once claimed to cherish.