"Democrats need to once more become the party that gets stuff done, builds things and makes government work for people. That’s a lot more important to most Americans than using the right pronouns." 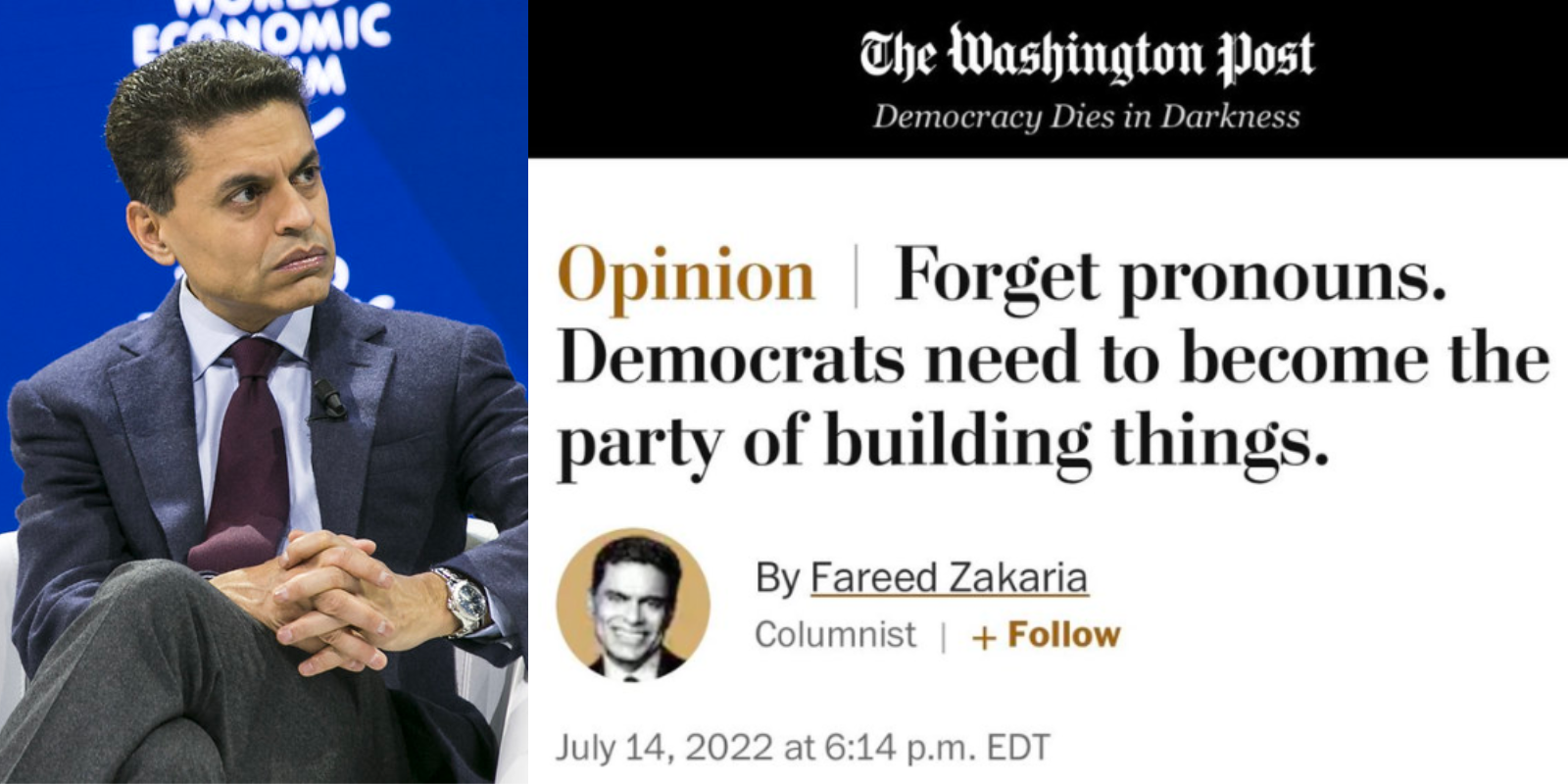 Zakaria shared the article on Twitter, saying "getting stuff done" is "a lot more important to most Americans than using the right pronouns." This was in response to a New York Times poll that showed President Biden as intensely unpopular, especially among young people. Yet the backlash against Zakaria was swift.

In the column, Zakaria listed of the myriad problems facing the US, from social problems to infrastructure to the economy. He then concluded: "This is not a perception problem. It is a reality problem. Democrats need to once more become the party that gets stuff done, builds things and makes government work for people. That’s a lot more important to most Americans than using the right pronouns." That currently is the only mention of the word "pronouns" in the piece.

Twitter users wrote about the need to respect others pronouns and paying attention to the needs of transgender people, Mediaite reported. Users of the platform attacked Zakaria for tossing aside pronouns without providing evidence the gender ideology delaying progress on other issues.

Chasten Buttigieg, a teacher by trade who is married to Transportation Secretary Pete Buttigieg, wrote, "It is wildly inappropriate to instruct Democrats to toss aside an entire group of Americans in order to win."

Without looking at the substance of the column, which instructed Democrats that most Americans don't care about pronouns, and that soft issues, like pronouns, are what many Americans believe the party stands for, Buttigieg doubled down on the need to respect pronouns. "Democrats can walk and chew gum," he said. "We can fix roads and build bridges while also making it a little easier to go about your life."

However, that does not actually seem to be true. Zakaria writes: "it has become very difficult to build anything in America, especially in blue states. President Barack Obama, who passed another big infrastructure bill in 2009, famously said later that 'there’s no such thing as shovel-ready projects.' That’s because, as New York Times columnist Ezra Klein has noted, the number of permits, reviews, and delays that have become part of the normal approval process have delayed or doomed the prospects of large-scale public projects. Democrats have become paralyzed by their own ideas and interest groups, and no one seems able to break through and actually get things done."

Elizabeth Spiers, a writer for both Slate and the New York Times who lists the pronouns "she/her" in her Twitter bio, said that Zakaria had a "wild misreading" of that Times poll, and accused him of "parroting a transphobic GOP talking point."

Oliver Willis of The American Independent accused Zakaria of making up a problem that didn't exist.

In a 2021 Pew Research poll, it was found that "There has been no shift in opinion on other questions on related topics. Half of Americans say they would feel very or somewhat comfortable using a gender-neutral pronoun to refer to someone if they were asked to do so, while 48% say they would feel very or somewhat uncomfortable doing so. These numbers are virtually unchanged since 2018."

Parker Molloy, a writer and trans rights activist, said the column was "deranged." Perhaps she was referring to the section which read: "There is plenty of evidence that the Democratic Party has moved left, that it is out of sync with Americans on many of these cultural issues, and that it needs to correct course. But it needs to do so clearly, forcefully and repeatedly. Republicans are clever at weaponizing the words of a few left-wing Democrats and branding them as the face of the party."

As of 5 pm on Friday, the headline of the article had changed to include no mention of pronouns in the title. It instead reads, "Democrats need to become the party of building things." This correction was not noted in the article, it was simply scrubbed clean.

Zakaria defended his article on Twitter, or perhaps was merely defending himself against accusations of transphobia, and leaned into his own intersectional identities for credibility. In Zakaria's view, his argument was about not giving the GOP such an easy road to linguistic victory as the absurd and constant push to bow to everyone's various chosen identifiers lumbers forward. Instead, he wants Democrats to win. The Democrats who went after him, apparently, would rather blast people for not using preferred pronouns.

"I hope it is clear that I am NOT arguing against any minority groups. (I belong to several myself.) I am arguing against giving Republicans an easy way to demagogue and divert attention. If the Democrats are wiped out in the midterms, it will not help these embattled groups any!"