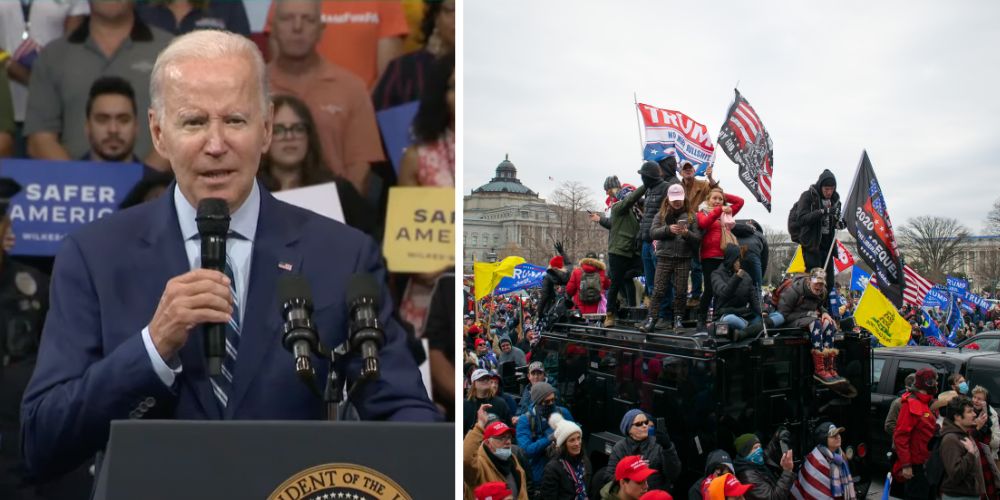 "You know, when I showed up, one of the things I learned as President, even though I had been Vice President for eight years and done a great deal on the foreign policy for the administration — I showed up at a meeting of the major democracies called the G7," Biden said.

"And I sat down — it was in England — and I sat down for this three-day conference. And I said, 'America is back.'  And Macron, the President of France, turned to me and said, 'For how long?’ 'For how long?' Then we had a discussion with [Scholz] and all of them — everything. It just — 'For how long?,'" Biden continued.

"And one of them said to me, 'Imagine, Joe, if you turned on the television in Washington, DC, and saw a mob of a thousand people storming down the hallways of the parliament, breaking down the doors trying to overturn an outcome of election and killing several police officers in the meantime. Imagine. Imagine what you’d think,'" he added.

Biden continued on to state that "What I find even more incredible is the defense of it."

Biden told conservatives that they’re either on the side "of the mob," or the side of the police. "You can’t be pro-law enforcement and pro-insurrection. You can’t be a party of law and order and call the people who attacked the police on January 6th 'patriots.' You can’t do it."

While three police officers died in the weeks and months after the riot at the Capitol, it was four Trump supporters that died on the building’s grounds that day.

The most notable of which was 35-year-old Ashli Babbit, who was shot and killed by a Capitol Police officer as she attempted to cross through a barricade blocking the House chamber and adjacent Speaker’s Lobby.

Others that died on the day, either at the grounds or being pronounced dead at nearby hospitals were Kevin Greeson, who collapsed in the crowd due to a heart attack, Rosanne Boyland, who the DC medical examiner said had died of an amphetamine overdose after reports said that she was crushed to death in a stampede, and Benjamin Philips, who suffered a fatal stroke.

Five officers died in the weeks and months following the attack, with one of these officers dying the day after.

Brian Sicknick, according to Capitol Police, had reportedly died from injuries sustained "while physically engaging with protesters."

However, the DC medical examiner later determined that Sicknick had suffered a number of strokes following the riot that lead to his death, but added however that "all that transpired played a role in his condition."

Four other officers died in the months following the attack, all of which were reportedly by suicide: Officers Jeffrey Smith, Howard Liebengood, Gunther Hashida, and Kyle DeFreytag.

On January 6, 2021, thousands of Trump supporters descended upon the Capitol building where Representatives were in the process of confirming electoral college votes that stated Biden had won the 2020 election, an election that Trump has said was stolen.