"Does he think MAGA Republicans are more of a threat to the country and people DHS says may pose a risk to national security and the safety of local communities?" 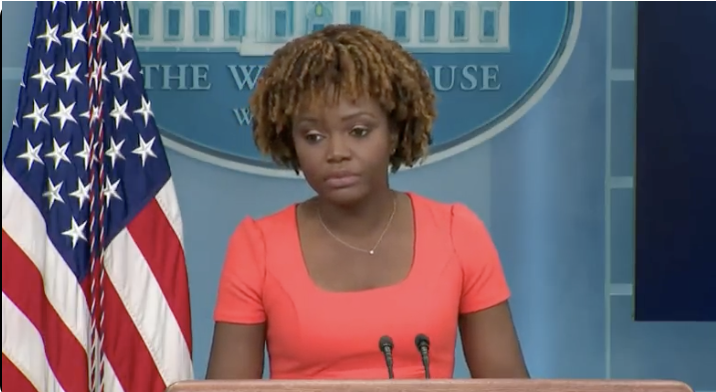 Fox News' Peter Doocy asked White House Press Secretary Karine Jean-Pierre on Wednesday if President Biden is less concerned about foreign terrorists, in the form of unvetted Afghan refugees, than he is about "MAGA Republicans." Trump supporters have been the subject of Biden's derision over the past few weeks, as he has repeatedly called them out as extremists.

"As refugees were being evacuated from Afghanistan into the US last year," Doocy asked, "why weren't they all being thoroughly vetted?" Jean-Pierre disputed this assertion.

"So are you talking about—what are you referring to?" Jean-Pierre asked.

"As the White House was managing the Afghanistan withdrawal last year, we were told 'no one is coming into the United States of American who has not been through a thorough screening and background check process. But now," Doocy said, "there's this DHS inspector general who says CBP admitted or paroled evacuees who were not fully vetted into the United States. That is not good, that's different than what you guys said. So how did this happen?"

That lengthy report from the DHS Office of the Inspector General (OIG) "concluded that the department granted parole, or temporary legal permission to enter and stay in the US to Afghan evacuees who 'were not fully vetted' following the massive airlift by the US during the chaotic last days of the withdrawal of US forces," CBS reported.

"US Customs and Border Protection (CBP) did not always have critical data to properly screen, vet, or inspect the evacuees," the report from DHS Inspector General Joseph Cuffari said.

"We determined some information used to vet evacuees through US Government databases, such as name, date of birth, identification number, and travel document data, was inaccurate, incomplete, or missing."

In October 2021, Senator Josh Hawley shared an email that he said was given to him by "an American official present in Afghanistan during the evacuation who was shocked by [the] Administration's failure to vet Afghan's before they were evacuated." He noted that there were detailed "orders from Joe Biden to fill up the planes - even without vetting."

"No it's not different than what we have said, that very report did not take into account the key steps in that rigorous— you heard from us— rigorous and multi layered screening and vetting process the US government took before at-risk Afghans were permitted to come to the US. Again, I would refer, I would refer you to the DHS comments on this. It did not take into full account of what the other aid agencies are involved in making sure that this multi-layered process and screening process— it, they, it is a, it is a multi-agency effort, and it did not, this particular report did not include that," Jean-Pierre said.

"Again, DHS has disputed this report. It didn't take into account the key steps that we have taken as a US government, the rigorous, multi-layered screening and vetting process that we take as a government that was not part of the report. Again, this report is not accurate. I know that our team has spoken to your team about this, and the DHS has provided a comment saying just that. So again, I refer you to DHS," Jean-Pierre said.

DHS said that they would keep working "with federal partners 'to continue to support the resettlement of qualifying Afghan nationals in the United States.'"