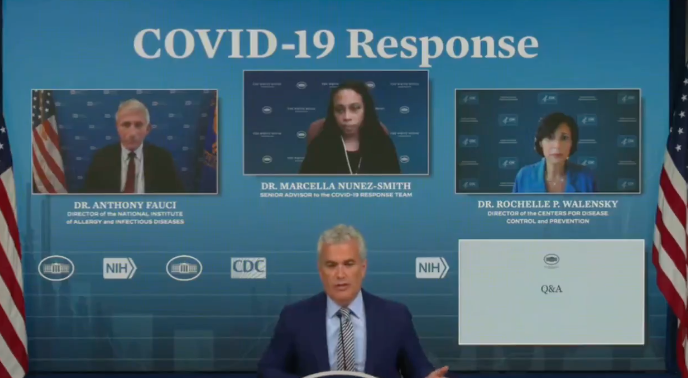 The CDC was asked during about "vaccine passports" and vaccine credentialing systems during COVID briefing on Thursday.

Biden administration COVID spokesperson Jeff Zients was asked "Is the administration reconsidering something like a QR code, or a passport, to help verify people's vaccination status and if not, what are you doing to stop the proliferation of fake vaccine cards?"

"There will be no federal vaccination database as with all other vaccines, the information gets held at the state and local level. Any system that is developed in the private sector or elsewhere must meet key standards, including affordability, being available both digitally and on paper, and most importantly protecting people's privacy and security.

"The second part of your question, we are aware of some cases of fraud, there are counterfeit vaccine cards being advertised on social media sites, e-commerce platforms. While the practice is not widespread, I will remind everyone that it's a crime and the office of the Inspector General, the Department of Health and Human services, is investigating these schemes."

In March, the White House said that there would be no federal vaccine credential, but they did say that they would be working with businesses to develop their own.

"A determination or development of a vaccine passport or whatever you want to call it will be driven by the private sector. Ours will be more focused on guidelines that can be used as a basis," she said.

"There are a couple, key principles that we are working from. One is that there will be no centralized universal federal vaccinations database, and no federal mandate requiring everyone to obtain a single vaccination credential."

"Second, we want to encourage an open marketplace with a variety of private-sector companies and non-profit coalitions developing solutions."

"And third, we want to drive the market toward meeting public interest goals. So we'll leverage our resources to ensure that all vaccination credential systems meet key standards."

"Whether that's universal accessibility, affordability, availability, both digitally and on paper. But those are our standards. It's currently going through an interagency process, we'll make some recommendations, and then we believe it will be driven by the private sector."

New York Mayor Bill de Blasio has already enacted provisions for  a vaccine credential which will be required for New Yorkers to move freely about the city to work, to work out, and to eat in restaurants. De Blasio said that mandatory vaccine credentialing is the "shape of things to come."

"I announced the key to NYC pass and about five hours later, the President of United States endorsed it," said de Blasio. He thanked the President, saying "that was very important and very helpful."