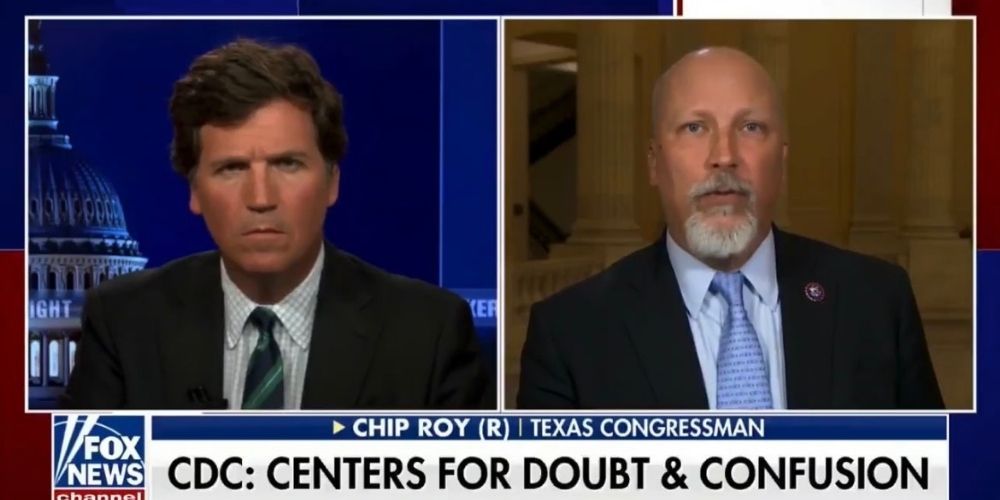 Congressman Chip Roy (R-TX) joined Fox News' Tucker Carlson on Wednesday to say exactly what he thinks about House Speaker Nancy Pelosi and her cadre of congressional Democrats for imposing yet another mask mandate on the House floor.

"Then they were against the vaccine then they were for the vaccine. Now they think the vaccine is something you must. Now they're backing off and saying, 'well wait, now we've got to get masked again here in Washington, DC,'" Roy continued while highlighting the hypocrisy.

Republicans met on the hill earlier Wednesday to discuss the Capitol's position on mask requirements which led to Congressman Roy slamming the new required mask mandate, slammed the "science" behind the decision.

"The Capitol position based its decision to re-require members of Congress to put masks on again based on a study that failed peer review, is unpublished, and is based on a vaccine in India that is not approved here in the United States," Roy said. "And on that he decided yesterday to say, 'oh, okay, we're going to restore a mask mandate on the house of representatives floor.'"

"I asked the simple question, our job as representatives of the people is to stand up and represent them. And when you say we have to wear masks, we're sending a signal to our country to lay down in fear," Roy continued.

The Texas Congressman went on to slam the Biden administration for allowing illegal immigrants to flood into the United States through the Southern border who are testing positive for COVID, then slammed his Republican colleagues who have yet to sign his petition that would require officials to turn away those at the border who have coronavirus.

"Here we are saying, 'oh, we're going to have to wear masks on the floor of the house, but we're going to do nothing to stop the flow of people coming across our border.' Republicans should be ashamed of themselves. I introduced legislation for a discharge petition to require the enforcement of title 42 so that we will turn people away at the border who has COVID rather than forcing this ridiculousness on the American people," Roy said.

"And you know what? Only about 125 of my Republican colleagues have signed that petition yet. Where are the other 80 Republicans?" Congressman Roy asked on Tucker Carlson Wednesday night.