"If people are dying every day, why would this President then say he wants to give it some space?" Doocy asked. 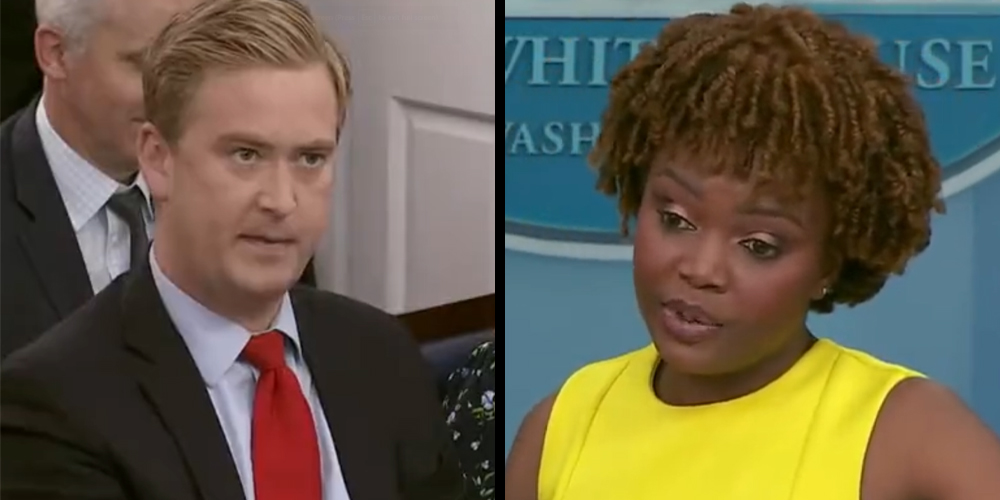 Hours before President Biden gave a speech on Thursday night demanding the curtailment of Americans' gun rights, and for Congress to implement his plans, Fox News' Peter Doocy asked just how these initiatives would play out.

"If the President thinks the Congress must act immediately to end this epidemic of gun violence. Is he going to bring any of the key players from Capitol Hill to the beach with him tonight?" he asked.

Karine Jean-Pierre didn’t know how to respond to the question at first, but Doocy added that during the 2020 campaign season, candidate Biden claimed he promised to get things done in Congress.

"He does, he does. I mean he’s beaten the gun lobby before…." the press secretary begins to say.

"But why not invite these lawmakers who haven’t beat the gun lobby, and say ‘this is how it’s done?’" Doocy responds.

"We saw he did that in the Senate during his Congress days, that he beat the gun lobby," Jean-Pierre replies back.

Doocy agreed with Jean-Pierre about Biden’s experience. She joked that the Fox News reporter was asking if he wanted to go to the beach too, to which Doocy made a quip about the weather.

"But if people are dying every day, why would this President then say he wants to give it some space?" asked Doocy.

Jean-Pierre’s response: "But you’re also gonna hear from the President tonight, and it’s not that he hasn’t been involved, he has been involved. I just listed out all the speeches that he’s made. I just listed out the executive actions that he’s taken. But I want to make sure that it is very clear that the President has indeed taken action. He can not do it alone, so he’s asking for Congress to act. The American public is going to hear from him tonight. I don’t have any meetings to preview or to lay out for. I’m not telling you it’s not going to happen, I’m just saying I don’t have anything to preview."

Doocy on follow-up. "You got Chicago, for example, they already have plenty of very strict gun laws, some of the strictest in the country. Forty-seven people shot there over the Memorial Day weekend, nine of them died. So which law would've prevented any of that? Do we think that all these people in Chicago who are shooting each other are legally buying their guns?"

In the aftermath of the Uvalde massacre, Texas Governor Abbott cited Chicago crime in an argument against enacting stricter gun laws.

Jean-Pierre argued in favor of the implementation of red flag laws, giving "a couple of exampled."

"In California," she said, "a study showed that a California red flag law has assisted in the prevention of twenty-one mass shootings between 2016 and 2018. Florida, since passing a red flag law in 2018: there have been notable cases of the law intervening in multiple cases of potential violence.

"In Connecticut and Indiana, for every ten to twenty preventions under the red flag laws, there was one fewer death than would otherwise have been expected. So when enacted, it does help. There are things that we can do, and one of the things that the President talks about with expanding the background checks, if we’re able to do that we are going to take more guns out of the hands of criminals, and that is incredibly important. So there [are] things here that can be worked out, that can be done. That is not going to prevent every tragedy, but will take us to a better place so we can protect our families."

Late last month, authorities in West Virginia claimed a mass shooting tragedy at a graduation party was prevented because a woman lawfully carrying a firearm was able to incapacitate the would-be shooter.

The Fox News reporter finished his exchange with Jean-Pierre by asking if Biden’s Thursday night speech was an attempt at distracting the public.

"You guys at the White House had some very hard headlines this week about inflation and about baby formula. If there's nothing new that you can point to in this speech tonight, did you just schedule it to get people talking about something else?"

The Press Secretary countered by claiming the mass shooting tragedies are also still fresh enough in people’s minds, regardless.

"People have died. People have died in the past couple of weeks in particular. We had nineteen kids die in Uvalde, just recently. A mass shooter came into their classroom and killed them, plus their two teachers. We had people doing everyday things on a Saturday, like some of us do, go to the grocery store and ten of them were murdered. Just last night in Tulsa, we’re learning of people who were, again, killed. So this is not about politics.

"This is not about partisan politics here. This is something that he has worked on, since he was a senator. This is really important and real for the President, and for the grieving families that he has met with, sadly, in the last two weeks. So this is an opportunity, again, to call for action. To get Congress to move. It is disheartening to hear that this could potentially, or if I’m hearing this right, could be used as a political tool and that’s not what this is. This is about people’s lives."

The 18-year-old suspect in the Buffalo mass shooting at a supermarket that killed ten people last month, pleaded not guilty on Thursday to ten counts of first-degree murder, ten counts of second-degree murder, three counts of attempted murder as a hate crime, a domestic terrorism charge, and another weapons charge.

A mass shooting at a Tulsa, Oklahoma hospital on Wednesday night left four dead, including the shooter. A New York City Councilwoman attempted to claim the motivation was "white supremacy," despite the shooter being black.