A man who acted as a “human chair” for his very pregnant wife went viral after a video was posted showing him being extremely chivalrous. 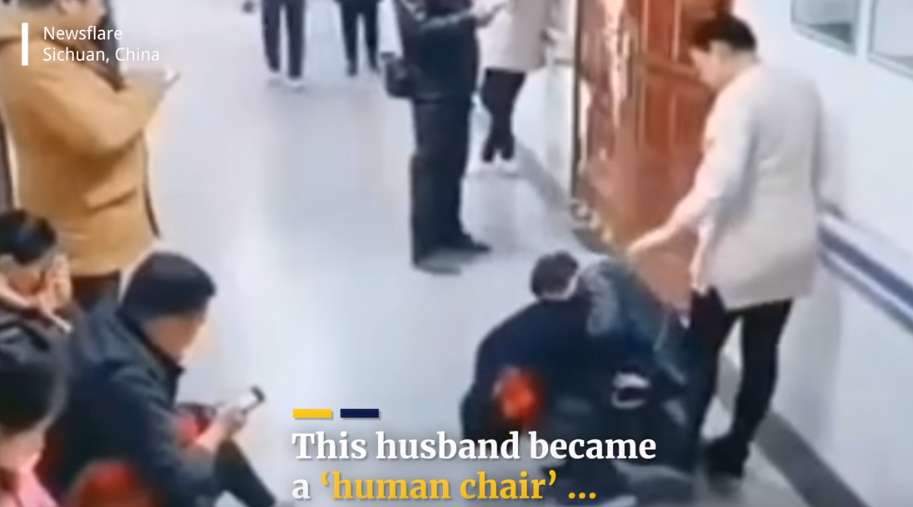 This husband gives a whole new meaning to “supporting his family.”

A man who acted as a “human chair” for his very pregnant wife went viral after a video was posted showing him sitting on the ground, hunched over, as his wife sits on his shoulders.

The video has gained millions of views after being uploaded just days ago. The footage is believed to have come from a hospital camera in Hegang, China.

The couple was in a crowded hallway in the hospital. Several people were taking up chairs on the other side of the hallway while being deeply engaged in their phones. The couple was waiting for a check-up for the pregnant wife.

After pacing the hallway for a short time the wife had become uncomfortable and had a numb feeling in her legs. After she started to hold on to a railing on the wall her husband quickly got down on the floor and leaned forward in order to support his wife on his shoulders and to ease her discomfort.

The man then proceeds to offer his wife a sip from his water bottle as he passes it over his shoulder.

Almost none of the bystanders in the hallway show any sign of noticing the husband’s act and nobody goes as far as to offer up a seat for the pregnant woman.

The video was first uploaded to Chinese social media and later added to YouTube by South China Morning Post.

Some people commented on the video saying, “Hmmmm. Touching that the husband became a human seat, but upsetting that no one gave them a seat.” and, “They are all to busy on their phones to even notice the pregnant woman!!!!”