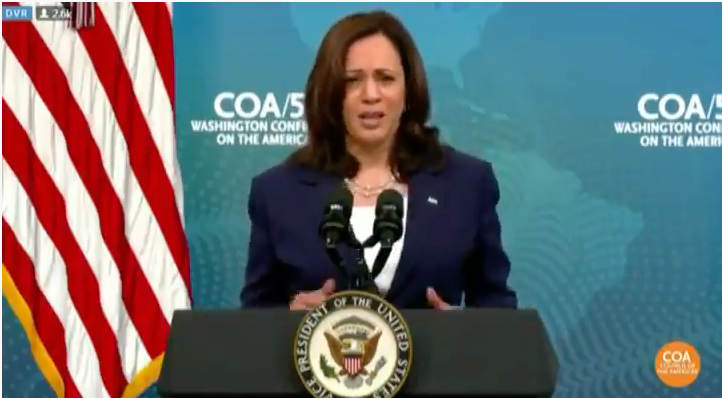 Vice President Kamala Harris, who has been tasked with dealing with the border crisis and the nations that are sending immigrants north, spoke at the Washington Conference on the Americas about the her plans for the region.

Harris said that while people are leaving their countries "at an alarming rate," "people in the region do not want to leave their homes" and their communities. She said that she believes they leave "only when they feel they must."

For Harris and the Biden administration, the main problem is that people have lost hope. Her job, she feels, is to bring hope back to those people so they don't leave.

"So we want to help. Our administration wants to help. We want to pick back up the kind of work President Joe Biden started when he was vice president. We want to help people find hope at home. And so we are focused on addressing both the acute factors and the root causes of migration. And I believe this is an important distinction. We must focus on both.

"First: the acute factors. The catastrophes, that are causing people to leave right now. The hurricanes, the drought, and the extreme food insecurity. And then there are the long standing issues. The root causes: And I'm thinking of corruption, violence, and poverty, the lack of economic opportunity, the lack of climate adaptation and climate resilience, the lack of good governance.

"Just this weekend we learned that the Salvadoran parliament moved to undermine its nation's highest court."

She spoke about the importance of an independent judiciary, not noting that in the US the president recently weighed in on the verdict in a jury trial before the jury had made their decision. Biden claimed that he was able to make the candid remarks as to how he personally felt the case should be decided because the jury was sequestered.

The Biden administration has touted its main crises, namely the pandemic, the economy, racism—which has been declared a public health crisis, and climate change. These are the same crises that will now be used to fund the administration's agenda in Central America, while they continue to invite unaccompanied minors to migrate across the US border with promises of food, shelter, education, and a pathway to citizenship.

The Biden administration has said that they are interested in keeping kids and families home in their home countries, but their policies bely this intention. Migrants have said that they are coming because of the administration's invitatation. While other factors are long-standing reasons that Central Americans may choose to leave home and head north, the recent surge has more to do with US policy than regional issues.

Harris said the US would undertake to provide "alternatives to gang recruitment," to "deliver food, shelter, water and sanitation," and due to droughts, "we must work with them to plant drought resilient crops," she said, specifically women farmers.

Corruption on regional governments was her main target, saying that corruption costs about 5 percent of the world's total GDP, and that the work "from combatting corruption to combatting climate change" could not be more important.

She said that "every sector" will have a role to play, from governments, to international partners, private businesses, and community groups.

$310 million in additional funds is being sent to Central America which will fund a virtual trade mission, more food assistance and a disaster assistance response team, among other things.

"We must think beyond government," she said, speaking about community organizations that have implemented a "place based approach," and that will "help us restore hope."