MANAFORT: Weissman went after me because I refused to corroborate the Steele Dossier for him

"I told them I would tell the truth, and I did – and it wasn't the truth that they wanted to hear, because they weren't dealing with the truth. They were dealing with a narrative that they knew was false," Manafort said. 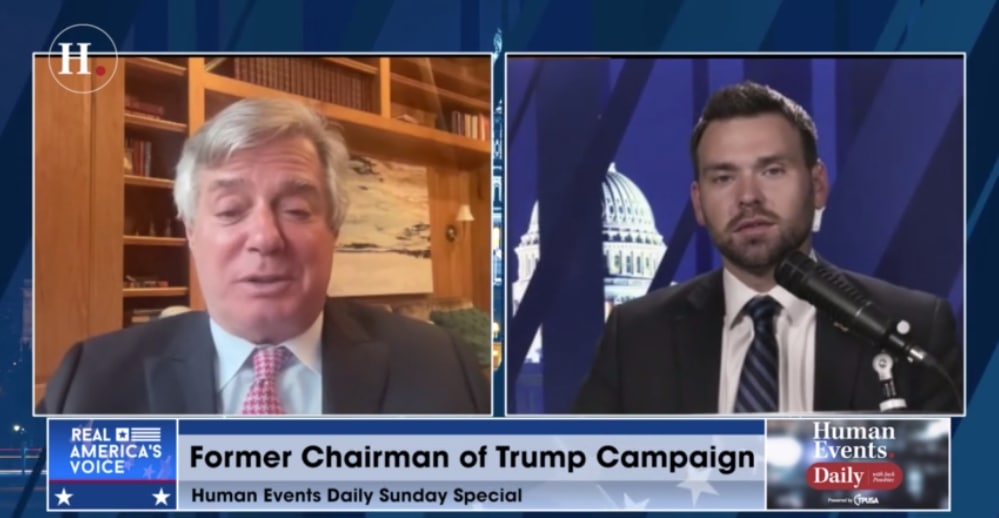 During this Sunday's episode of Human Events Daily with Jack Posobiec, former Donald Trump presidential campaign chair Paul Manafort opened up about Robert Mueller's investigation into alleged Russian collusion, and his subsequent prison sentence that was cut short by a presidential pardon from his former boss.

The episode was recorded on the first day of the trial of Igor Danchenko, primary source of the infamous anti-Trump Steele dossier, who is being tried on allegations of lying to the FBI about Trump's ties to Russia while he was a paid informant.


"One of the big bombshells that we're hearing is that he was offered a million dollars by the FBI to corroborate the Steele dossier," Posobiec said of Danchenko's lies to help the bureau come up with dirt on Trump. "My question is, did they ever go to Paul Manafort and offer you anything to corroborate any of this dossier?"

"Well, they didn't offer me anything. But they were intimidating me and threatening me of what was going to happen to me if I didn't tell 'the truth,' and 'the truth' was giving up Donald Trump," Manafort replied. According to the pardoned felon, he told the real truth.

"I told them I would tell the truth, and I did – and it wasn't the truth that they wanted to hear, because they weren't dealing with the truth. They were dealing with a narrative that they knew was false," he said.

Manafort also stressed the difference between foreign interference and collusion, arguing that special prosecutor Mueller tried to "blur" the distinct lines between the two.

"What they did very cleverly, in the Mueller report, to the uneducated eye, is they blurred Russian interference and Russian collusion," he said to Posobiec. "... we had Ukraine interference… We had China interference – countries interfere 'cyberly' in elections every year, and we do the same, by the way, in other countries."

"But that's very different than colluding with a foreign national government to undermine an election," Manafort added, before blaming attorney Andrew Weissmann, who had a management role in the special investigation under Mueller.

"Mueller came down on the right side of there being no collusion, but he still tried to blur the line because of Weissmann to imply that there was still something sinister there as far as part of the Russian interference. Nobody ever found one iota of evidence because there was not."

According to Manafort, the prosecution's theory that Trump colluded with Russia to win the 2016 election doesn't make sense, because Trump was the "only one who stood up for Ukraine against Putin."

"The other piece that Wiessmann needed in his theory was the payout for Trump, that Putin was gonna get from Trump. And Weissmann's theory was, 'Well, when Trump becomes president, he'll give Putin Ukraine,''' Manafort said.

According to the veteran Republican political consultant, he was housed in a unit alongside convicted sex trafficker Jeffrey Epstein, and the notorious Mexican drug lord El Chapo.

Then Manafort spoke of his time being held in a solitary confinement unit at the Metropolitan Correctional Center in New York City. He said to Posobiec of the four cells in the unit: "One was empty. Epstein was in one, I was in one, and El Chapo was in the other."

"How did you make it through so long? Solitary – I mean for so many people, they don't do so well when they're put in a situation like that," Posobiec inquired.

Manafort cited three core strengths that he pulled from to get through the ordeal.

"Yeah, there were three reasons… I mean, I knew I was innocent. I knew that I didn't do anything wrong, which was important to me. I also had my faith... and I relied on my faith to just give me the strength to deal with it. And my family and friends."

He then recounted a critical conversation he had with his wife, Kathleen, that changed his stressed mindset to a positive one while in solitary confinement.

"I said to my wife, I was stressing out… and she said, 'You need to get control of your stress.'" Manafort said. "I said, 'But I'm worried about you. I worry about my kids.' And she said something to me, which literally was foundational to getting through the next two years."

"She said, 'Look, we started with nothing. If we end up with nothing, but love each other and our family, that's all that matters.' And as simple as that sounds, it was profound. And that gave me the courage to just know that I could make it through and not have to worry about them," he recalled.