"What are y'all doing? This makes no sense," Cruz said to Wray over the new categorization of the historically patriotic symbols. 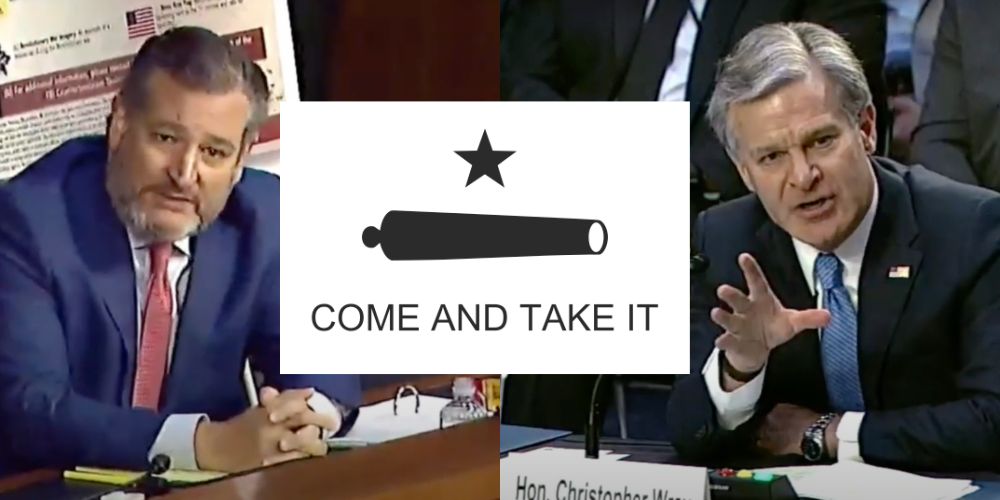 In a clip posted by The Post Millennial, Cruz said, "I will self-report right now that every day in the Senate I wear my boots that have the Gonzalez battle flag on the back of it."

Cruz said he was "particularly struck," as a Texan, because the flag is a source of pride for many Texans. The stark black and white iconography depicts a simple cannon with the words "come and take it" emblazoned above it.

According to Ammo, the flag was designed in honor of the Texan city of Gonzalez declaring independence from Mexico in 1835. The city was given the cannon by the Mexican government to fight off Comanche raids, but refused to return the weapon after the city decided to separate. When the Mexican government wanted it back, the message the city sent in response was simply, "come and take it."

Cruz's questioning of Wray was part of a larger investigation into the origins of a leaked FBI document that listed numerous symbols, historic references, common phrases, and military networks that are historically patriotic as evidence of "Militia Violent Extremists," or MVE.

Cruz said the FBI has been "weaponized and politicized" by marking these icons as aligned with MVE or commonly used by "Anti-Government or Anti-Authority Violent Extremists."

"What are y'all doing? This makes no sense," Cruz said to Wray over the new categorization of the historically patriotic symbols.

The document also lists a number of historic symbols, including the Gadsden Flag, the Liberty Tree, the Betsy Ross Flag, as well as Revolutionary War imagery from the American Revolution that gave the nation its freedom.

"Included on this list is the Betsy Ross flag. Now that's fairly remarkable that the Betsy Ross flag, in the FBI's indication, is indicative of militia violent extremism -  because among other people who have been publicly alongside the Betsy Ross flag; we have President Barack Obama, who was sworn in directly underneath two Betsy Ross flags," Cruz told Wray. Cruz then reminded Wray that the Gadsden Flag can be currently found on Virginia license plates.

Wray's response to Cruz was, "Senator, I'm not familiar with that particular document you have behind you."