"This is the only hour on an American news channel that will not be carrying their propaganda live. They are lying and we are not going to help them do it. What we will do, instead, is to try to tell you the truth." 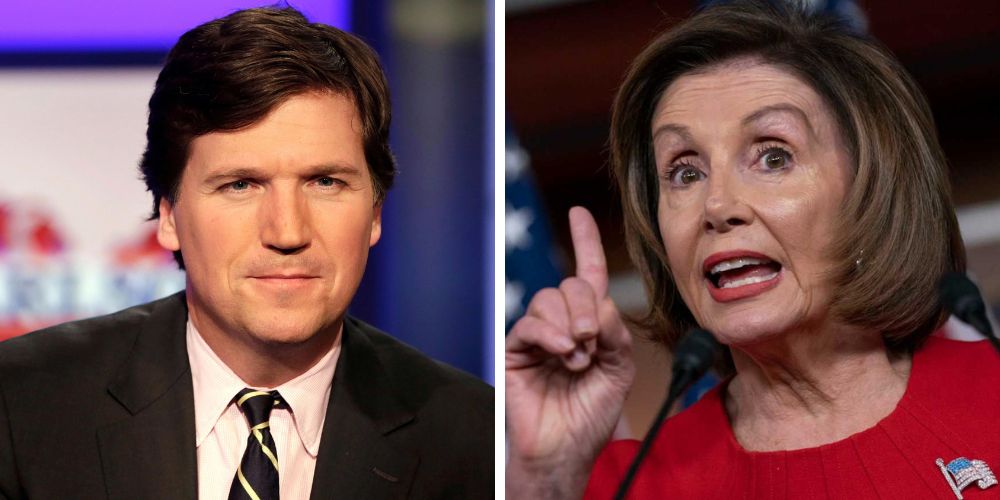 Fox News host Tucker Carlson slammed mainstream media on Thursday for airing the first public trial of House Speaker Pelosi's Jan. 6 select committee during primetime news hours and said that FOX News is the only American news channel "that will not be carrying their propaganda live."

Carlson called out broadcast news networks for airing Jan. 6 "propaganda" instead of focusing on much larger issues that are currently facing the United States, such high gas prices, increase in drug overdoses, the economy careening towards a devastating recession, and the United States being on the brink of a nuclear war.

"The other networks can't be bothered to cover any of that tonight. Instead, they've interrupted their regularly scheduled programming to bring you yet another extended primetime harangue from Nancy Pelosi and Liz Cheney, about Donald Trump and Q anon," Carlson said. "The whole thing is insulting. In fact, it's deranged and we're not playing along."

"This is the only hour on an American news channel that will not be carrying their propaganda live. They are lying and we are not going to help them do it. What we will do, instead, is to try to tell you the truth. We've attempted to do that since the day this happened. We hated seeing vandalism at the US Capitol a year and a half ago, and we said so at the time. But we did not think it was an insurrection. Because it was not an insurrection. It was not even close to an insurrection," Tucker Carlson insisted.

The Fox News host explained that not a single person in the crowd was found to be carrying a firearm and that the only person who wound up shot to death on January 6 at the US Capitol was an unarmed protester.

"She was a 36-year-old military veteran called Ashley Babbitt. Babbitt was just over five feet tall, she was unarmed. She posed no conceivable threat to anyone. But Capitol Hill police shot her in the neck and never explained why that was justified," Carlson said. "Those are the facts of January 6."

Carlson called out the House select Jan. 6 committee, along with mainstream media networks, who constantly mention that they just want to find out the "truth" about "that day" but are also withholding thousands of hours of video evidence from the public.

"But what did happen exactly on January 6, what's the truth of that day? Well, that's still unknown. From the extensive video we have of January 6, it's clear that some in the crowd, more than a few, were encouraging protesters to breach the Capitol to commit felonies," Carlson said. "In the case of a man called Ray Epps, we know his name, but they've never been charged. Ray Epps was standing in exactly the same place that a lot of people who went to jail were standing. But he wasn't charged. His name was taken off the FBI's most wanted list. Why is that? It doesn't make any sense at all."

"The January 6 committee will not explain that. After a year, millions of dollars, thousands of interviews, they won't tell us, nor will they tell us, how many FBI agents and assets were in the crowd that day and what were they doing there. Why can't we know that? And why are they still hiding thousands of hours of surveillance footage from within the Capitol?" Carlson asked. If the point of the committee was to get the truth out there, why can't we see the tapes? Why did authorities open the doors of the Capitol to rioters and let them walk in, usher them in the doors? That's utterly bizarre."

Carlson went on to continue the segment and said, "If at any time in your life you've ever made fun of totalitarian regimes that broadcast lies into the homes of the population that they can't turn off, take a look at that. That's happening right now."