WATCH: Tucker Carlson says Nicki Minaj is one of the 'bravest' people after Twitter suspends the star

Carlson praised Minaj for speaking about the necessity to protect speech freedoms, saying "you should be able to ask questions about anything you put inside your body." 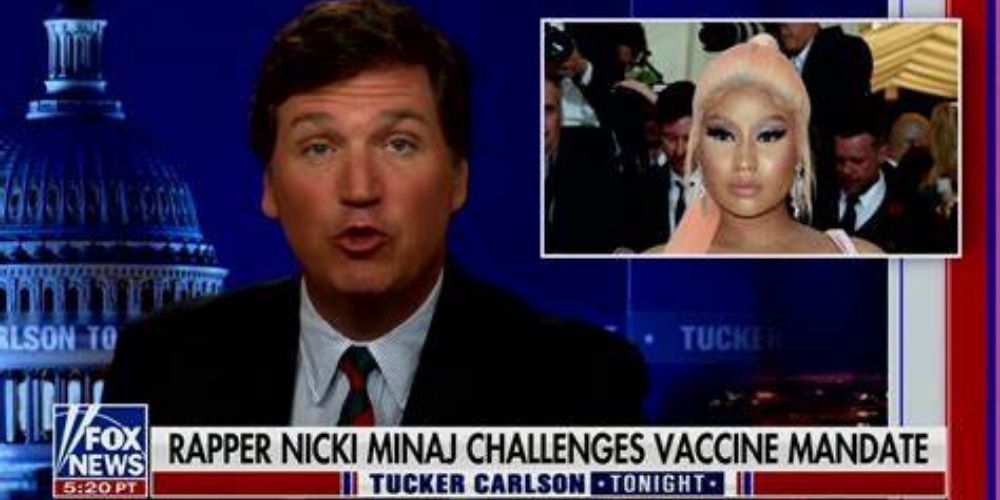 Fox News host Tucker Carlson called rap star Nicki Minaj one of the "bravest" people on Wednesday for not bowing to the mob after the artist was allegedly suspended from posting on Twitter following a series of tweets stating her concerns on getting vaccinate. These caputured the attention and vitriol of Dr. Anthony Fauci and MSNBC's Joy Reid.

Carlson showed clips from an Instagram Live video Minaj posted after she had been suspended from Twitter. She spoke about the necessity to protect speech freedoms, saying "you should be able to ask questions about anything you put inside your body."

"Do y'all realize that I remember going to China and they were telling us you can't speak out against the people in power there, etc., and I remember all of us thinking okay, and we respect the laws here, and it's different where we live. But don't you see what's f*cking happening? That we are living now in that time? Where people will turn their back on you?... Where people will turn your back on you if you simply speak and ask a question? Y'all don't see what's f*cking happening?"

"So many artists feel this way but they are afraid to speak up," she said, noting that she will "never use Twitter again."

"Black women, are y'all forgetting there was a time, not too long ago, where you couldn't even make eye contact with people and you're okay with what's happening?" Minaj asked. "We're no longer even allowed to voice our opinions or to ask questions. Now here's what's interesting."

The "Anaconda" singer shared a video clip from a Tucker Carlson segment on Tuesday which consisted of the host standing up for Minaj to make her own decision on medical procedures. Because the rap star shared a Tucker video, Minaj was met with more backlash.

In response to the "Anaconda" singer's statement, Tucker Carlson said "The two points she's making are worth reiterating."

"And the second point that she's made quite a bit today is that you have a constitutional right, a moral right, a God-given right, to ask simple questions and expect answers. Like you're an adult speaking to a fellow adult. And when you forfeit that right, you are no longer an adult. You're no longer free. You're no longer a citizen. You're something much less than that. It's not complicated," Carlson concluded.