"In other words never. You're never taking off the mask." 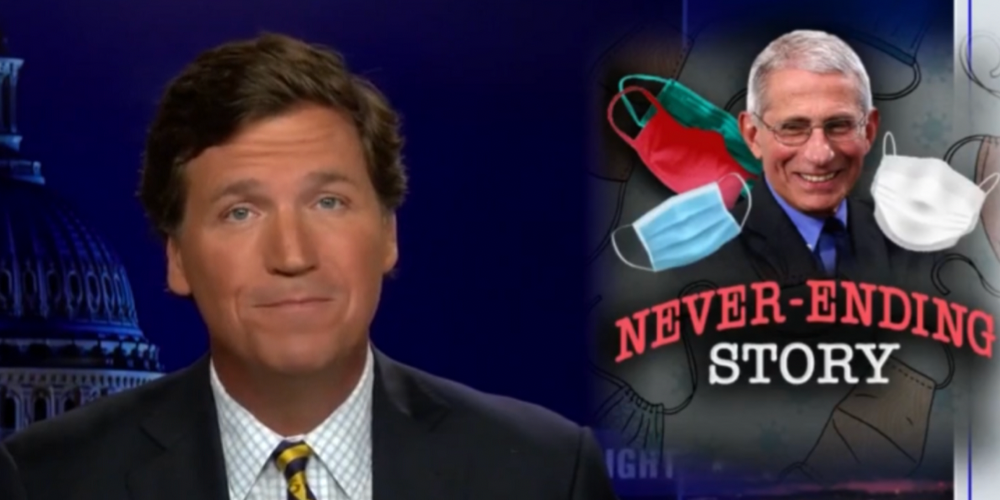 In a clip, when asked if mask wearing would remain a seasonal aspect in the United States on NBC's Meet the Press, Fauci responded that people may start electing to wear masks on a seasonal basis from now on.

"That's quite possible. I think people have gotten used to the fact that wearing masks clearly, if you look at the data, diminishes respiratory diseases," said Fauci. "So it is conceivable that as we go on, a year or two more from now, that during certain seasonal periods, when you have respiratory borne viruses like the flu, people might actually elect to wear masks to diminish the likelihood that you'll spread these respiratory borne diseases."

"In other words never. You're never taking off the mask," Carlson retorted. "Get ready for a lifetime of filthy wet cotton covering your mouth, reduced oxygen flow to your brain, and a world where every stranger looks the same because no one has a face."

Pointing out the controversial clip of Vice President Kamala Harris kissing her husband, both with face masks, Carlson states that we are looking at our futures.

"When Kamala Harris and her husband kissed the other day while wearing masks, they were giving you a preview of your daughter's wedding," he said. "In a masked world human beings never really touch each other."

"Is that public health?" Carlson questioned, answering by stating that this was an act of punishment on American residents.

Quoting a piece by science writer Nicholas Wade that pointed to the origins of the COVID-19 virus in Wuhan, China, Carlson said "did people or nature open Pandora's box at Wuhan.

The article, posted on Medium, points the finger at Fauci for being responsible for the pandemic, a point that Carlson says is the reason why Fauci has "authoritarian germ hysteria" is to get the spotlight off of his own connections to the outbreak.

Carlson states that at the time of the outbreak, the Wuhan institute of Virology was conduction studies on how to make bat viruses infections to humans. Those experiment were allegedly funded by American tax dollars, and approved and directed by Fauci, something Senator Rand Paul had grilled Fauci on on Tuesday.