WATCH: Utah doctor accepts award for adolescent 'gender affirming care,' calls it the 'most rewarding' experience of his life

A doctor at the University of Utah Hospital said that providing "gender affirming" care to minors is one of the most rewarding experiences of both his medical career and his life. 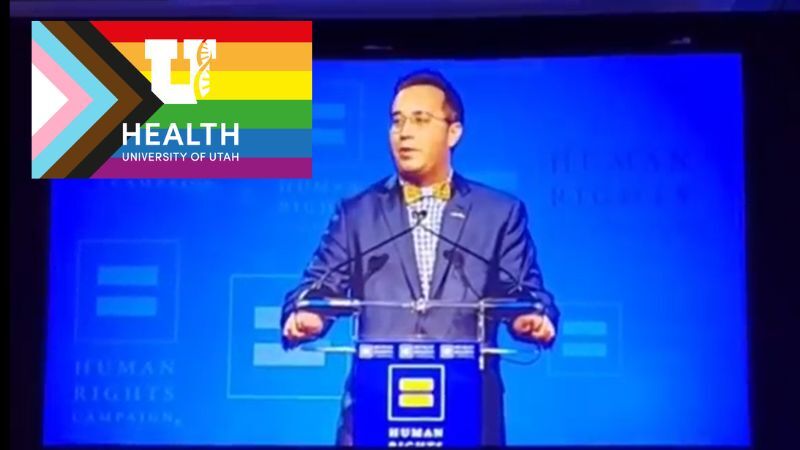 A doctor at the University of Utah Hospital said in an awards accetance speech that providing gender affirming care to minors, the common term for all things sex change-related, is one of the most rewarding experiences of both his medical career and his life.

Dr. Adam Dell, of the Adolescent Medicine Center at the University of Utah, called "gender affirming care," which can include drugs to block puberty in troubled adolescents and prescribing them irreversible cross-sex hormones before they are even old enough to consent to a tattoo, "life-saving" in a speech given at a Human Rights Campaign Utah event in June of this year.


Dell was accepting an award on behalf of the Adolescent Medicine Clinic, which was being recognized by HRC Utah for its services to “transgender and gender diverse youth and their gender affirming care needs,” according to the clinic’s Facebook page.

“I’m honored and humbled to be accepting this award on behalf of the University of Utah Adolescent Medicine Clinic for being a gender-affirming provider for adolescents and young adults in our community,” said Dell. “It’s by far one of the most rewarding experiences of my medical career and my life.”

"Now more than ever, we need more champions in health care providing gender-affirming services to gender diverse youth: It is life-saving care," he said.

This pronouncement was met with rapturous applause from the assembled crowd who don’t appear to be aware that the transition-or-suicide myth has been thoroughly debunked, nor that repeatedly telling a vulnerable group of young people that they are at risk of suicide makes them at a greater risk of suicide given the fact that suicide is socially contagious.

“I refuse to lose another child to suicide because their state, their family, or their insurance company has denied them care,” Dell went on. “Now more than ever, we need folks like you up at Capitol Hill, fighting against these hateful laws that are being passed that are taking away from our gender diverse individuals."

The bills to which Dr. Dell is referring are those which seek to ban the medical transition of minors, such as in Florida, Arizona, Arkansas, and Michigan. These states are taking action to protect children from proceeding with medical transition, arguing that an adolescent is not developmentally mature enough to consent to interventions that will likely leave them infertile nor to major surgeries such as the removal of perfectly healthy breasts or genitals.

Dr. Nicole L. Mihalopoulos, a fellow doctor at the UofU Hospital is on record saying that testosterone is a “tricky hormone,” and that starting testosterone does not magically remove dysphoria.

“The initial doses of testosterone seem to do really great things for overall mental health,” said Mihalopoulos to what appears to be a group of parents of trans-identified teenagers in video footage shared on Twitter by Inside the Classroom. “We get this improvement in mental health and this lowering of dysphoria, but then mental health goes down and dysphoria kind of rises.”

“Now more than ever we need parents who accept and affirm their children regardless of their sexual orientation or gender identity,” Dell said, meaning parents must accept the sudden announcement that their daughter is their son, and must gladly consent to her desire to sacrifice her future fertility.

“HRC has been on the front lines advocating for LGBTQ+ youth. The University of Utah and the Department of Pediatrics will continue to stand with HRC on the front lines to make certain affirming healthcare is a reality for everyone.”

Dell proudly announced that the UofU had received a perfect score in the HRC Healthcare Equality Index (HEI), which is the “national LGBTQ+ benchmarking tool that evaluates healthcare facilities' policies and practices related to the equity and inclusion of their LGBTQ+ patients, visitors and employees.”

In 2022, 496 healthcare providers in the U.S. were awarded the top score for being affirming spaces for LGBTQ+ staff and patients, including the gender clinic at the Children’s Hospital of Philadelphia (CHOP), known for training staff on how to coerce reluctant parents into consenting to the medical transition of their child, as well as transitioning vulnerable youth who are homeless or in foster care.
ADVERTISEMENT
ADVERTISEMENT
Utah HRC