Police video shows a black vehicle that is "suspected of leaving tire marks across a portion of the pride crosswalk at the intersection" outside of the police station. 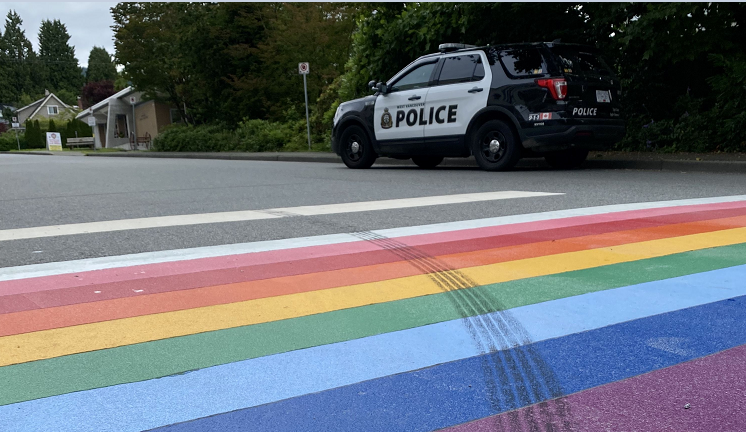 "There is a condition worse than blindness, and that is, seeing something that isn't there"
-Thomas Hardy

The poor West Vancouver Police are having to waste their time on a report of tire marks "tarnishing" the new Pride crosswalk in West Vancouver.

A police video posted by NewsTalk 1130's Sonia Aslam shows police video of a black vehicle that is "suspected of leaving tire marks across a portion of the pride crosswalk at the intersection" outside of the police station.

The police department is now investigating the incident, with Cst. Kevin Goodmurphy telling 1130 that the person "[chose] to leave a gesture of hate on a crosswalk that stands for the exact opposite."

"We have had nothing but support from community members following the installation of the crosswalk, and we know that those people represent the majority," Goodmurphy continued.

A post from the West Vancouver PD on Twitter explained further: "You'll see the tire marks in the photo. The suspect accelerated at a high rate of speed, leaving tire skid marks across the pedestrian crosswalk as well as along Esquimalt Ave. We are hoping that someone will recognize the vehicle and contact us."

The rainbow crosswalk was revealed on June 30.