'Women and non-men' invited to conversation with Pennsylvania Democrats

"Join us tomorrow evening for a phone bank where we will be talking to women and non-men about issues affecting our communities that highly impact non-men in PA," PA House Democrats said Tuesday on Twitter. 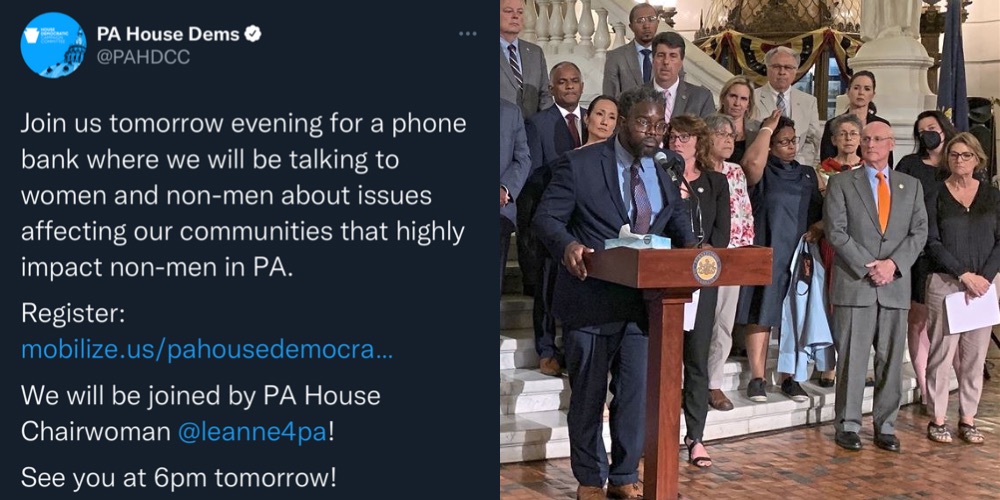 In the latest effort to virtue signal inclusivity, Pennyslvania Democrats have invited "women and non-men" to participate in discussions that impact the community.

"Join us tomorrow evening for a phone bank where we will be talking to women and non-men about issues affecting our communities that highly impact non-men in PA," PA House Democrats said Tuesday on Twitter.

"We will be joined by PA House Chairwoman @leanne4pa! See you at 6pm tomorrow!" the post reads.

It's unclear what PA House Democrats meant when they invited both "women" and "non-men" to participate in the discussion, as they did not specify the definition of "non-men."

Individuals in the comments seemed to be confused by the terminology, too.

"This is why your entire party is beginning it's deserved slide into irrelevancy," one Twitter user wrote.

Another said, "When you start using that language ("non-men"), you've already lost a ton of voters."

"Chair "woman" or Chair "non-man?  Asking for a friend…," another responded.

However, the new terminology fails to come as a shock. Over the past few years, Democratic officials have sought to erase biological sex from society. Lawmakers have changed the word mother to "birthing person," and just a few months ago, the newest Supreme Court Justice Ketanji Brown Jackson was unable to define the definition of a woman.