Yale's 'kill whitey' speech is not shocking—it's the new normal

A psych professor's speech to Yale Medical School about fantasizing about shooting white people is not shocking—it's exactly what we should expect from higher education. 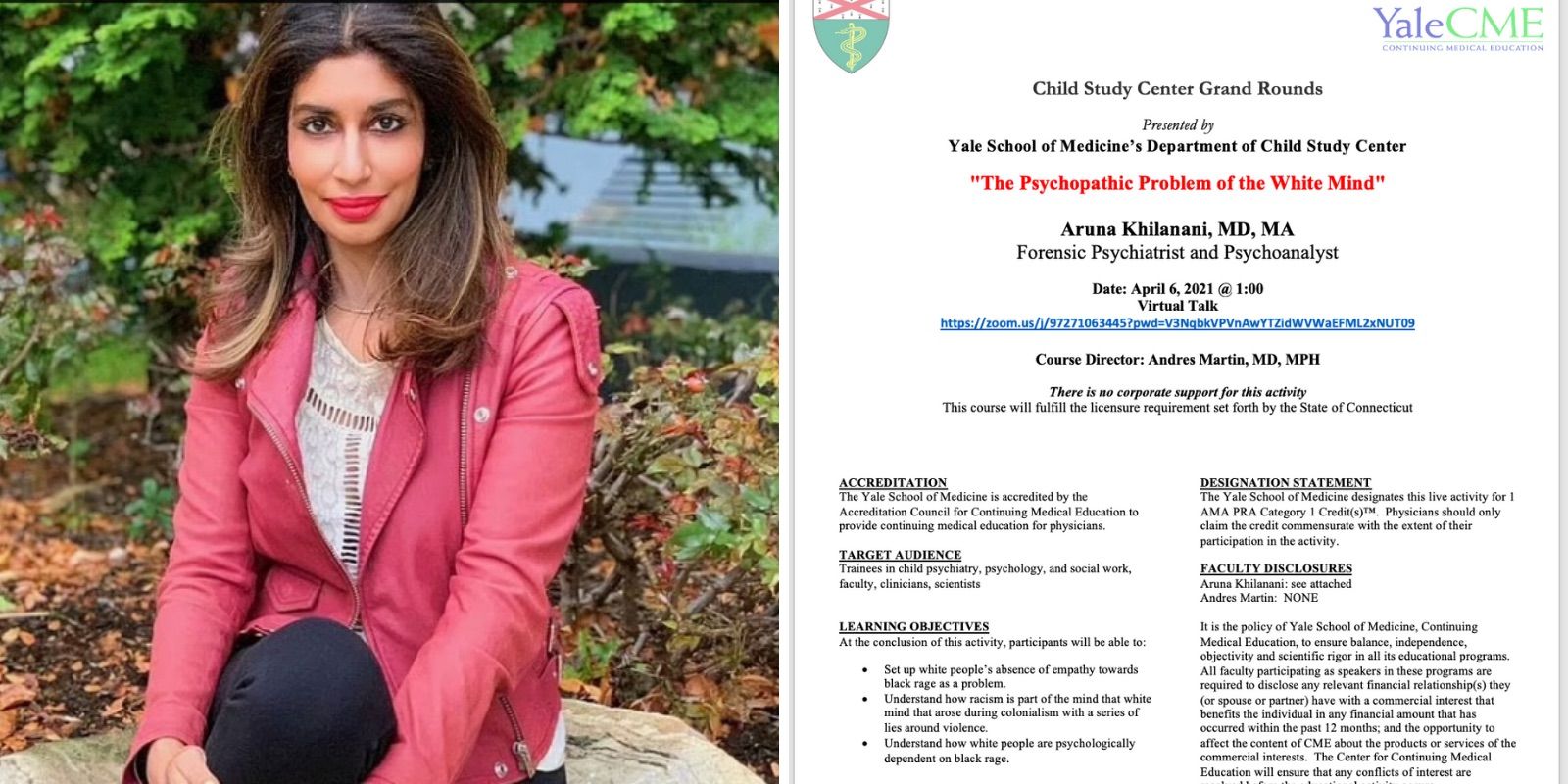 Every day we are treated to new revelations of how far "antiracist" pedagogy has infiltrated American schools. Now we have seen so-called antiracist theory and practice in the nation's top universities and largest public school systems. Each released video is more shocking than the last—but we shouldn't be shocked. This is exactly what we should expect from higher education.

Another emerged this week from Katy Herzog, sharing her findings on Bari Weiss' Substack. Psychiatry professor Aruna Khilanani, who also has a private practice, gave a lecture at Yale School of Medicine's Department Child Study Center in which she said that white people were basically the worst people ever, by virtue of the oppression they'd inherited and perpetrated on account of being white.

What started at the university level has become entrenched there, and as graduates leave school and begin their own teaching careers, those lessons become part of their own teaching practice. Khilanani notes in her bio that she completed a Masters of Humanities at the University of Chicago in critical theory, around issues of gender, race, sexuality, African American Studies, embodiment and class.

Excerpts from her talk on "The psychopathic problem of the white mind" included talking points about how the cost of talking to white people is "The cost of your own life, as they suck you dry. There are no good apples out there. White people make my blood boil," Khilanani said.

She told students: "I had fantasies of unloading a revolver into the head of any white person that got in my way, burying their body, and wiping my bloody hands as I walked away relatively guiltless with a bounce in my step. Like I did the world a f*cking favor."

"White people are out of their minds and they have been for a long time."

Khilanani spoke to the recent issue that white people don't like being derided and insulted on the basis of their race, calling it a "psychological predicament, because white people feel that we are bullying them when we bring up race. They feel that we should be thanking them for all that they have done for us."

"They are confused, and so are we. We keep forgetting that directly talking about race is a waste of our breath. We are asking a demented, violent predator who thinks that they are a saint or a superhero, to accept responsibility. It ain't gonna happen. They have five holes in their brain. It's like banging your head against a brick wall. It's just like sort of not a good idea," Khilanani said.

"We need to remember that directly talking about race to white people is useless, because they are at the wrong level of conversation. Addressing racism assumes that white people can see and process what we are talking about. They can't. That's why they sound demented. They don't even know they have a mask on. White people think it's their actual face. We need to get to know the mask," was the final quote Herzog pulled from the lecture, which she provided in full.

Yale University School of Drama's stage management chair Narda Alcorn looks forward to destroying the entire theatrical art form in the name of antiracism. A Portland school teacher claims that if teachers aren't teaching critical race theory then they are committing child abuse. White teachers cancel themselves because their whiteness disqualifies them from teaching students. Some uphold the tenets of critical race theory as having the benefit of being founded in Marxism. This messaging has made it to the White House, and is a frequent talking point of the president. He even delivers it to university grads.

It becomes increasingly difficult to listen to advocates of antiracist pedagogy, or critical race theory, explain that what they are doing is teaching equity, or correcting the problematic teaching and studies that have come before. Instead, day after day, we witness new forms of anti-whiteness in classrooms.

And that's what this is—it is no longer some kind of educational reparations meant to reverse disparities, it is now fully and directly the implementation of racist ideology against white people. There has been this long standing idea that there cannot be racism against white people and that minorities in America cannot be racist against a dominant group, that any prejudice or bias from minorities toward white people is not race-based but privilege-based, and that this is a justifiable prejudice.

We are no longer in that place, if we ever were. It has become commonplace and normal for academics, pundits, journalists, and artists to classify white people according to stereotypes, and to feel righteous doing it. Think of the stereotypes of white people, the Karens, soccer moms, Beckies, the basic, the Chads. Noah Berlatsky wrote in 2014 that "Even when you point to it, whiteness is invisible. Whiteness... is the power of not having to live with whiteness. It's the magical ability to make everyone think that, in America, your skin color has nothing to do with who you are."

Our educational system has successfully rearranged the idea of race. Instead of a society where each person's worth is not based on their race or ethnic background, we have recreated our society as one where race is integral to what a person is, to their essence, and to their value. People who are white were long considered to be oppressors in the US, but that circumstance is no longer a viable one.

The constant drumbeat of "systemic racism," the idea that white Americans stand to benefit from the power structure no matter what, whether they know it, acknowledge it, or not, has created the perception that they are simply bad, ignorant, stupid people who need to be eliminated from society.

White people have erroneously accepted the mantle of "whiteness," have taken on the identifier that equals oppression. There is nothing to be proud of in being white, but there is nothing to be ashamed of, either. Our educational system has taken up the call that white people are a force to be destroyed, but this is not a paradigm America can survive.