Fresh surgical incisions were visible on the young patient's chest as she stood with her Hawaiian shirt opened and unbuttoned, under a sign that reads: "be yourself." 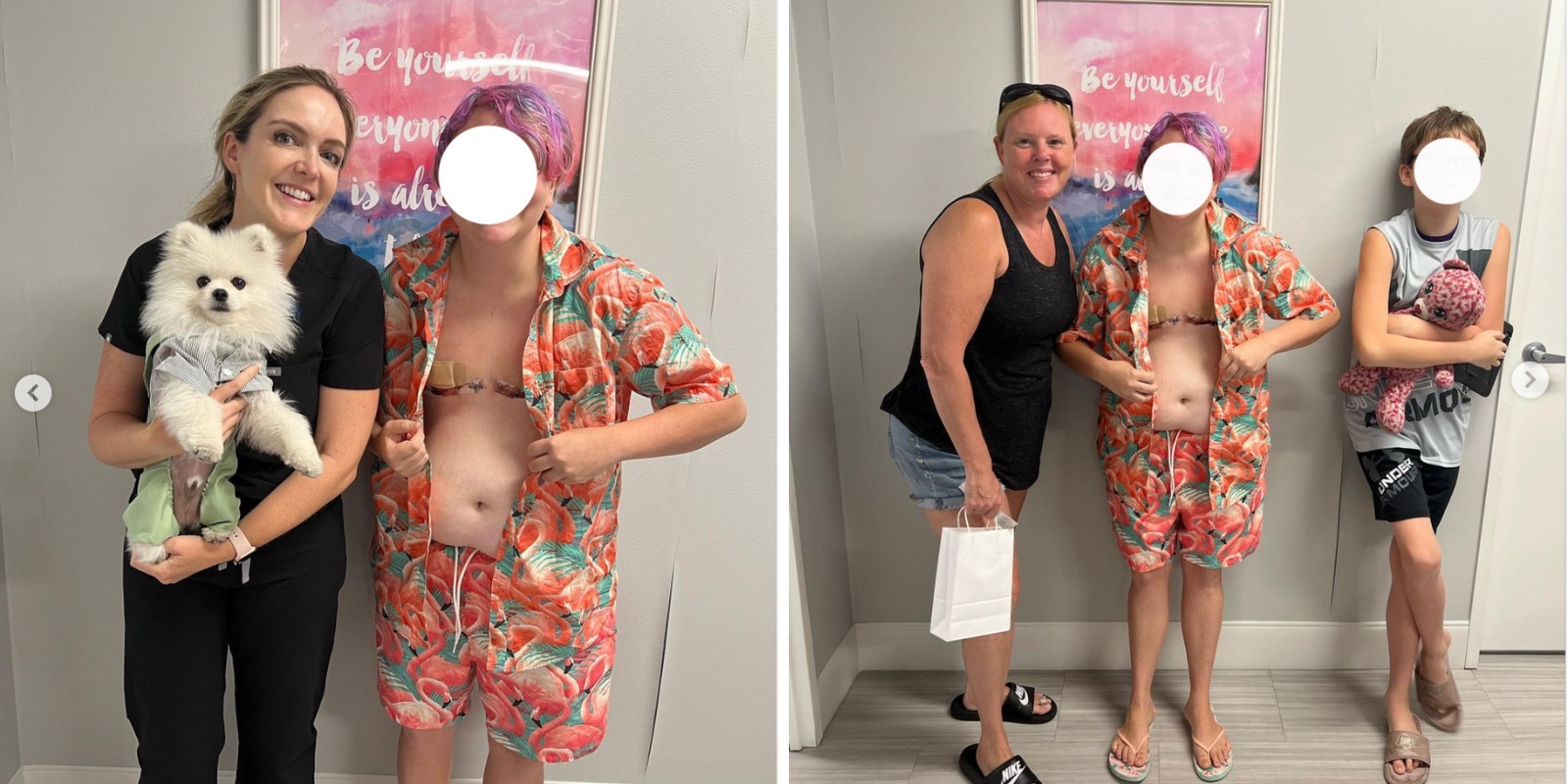 A young patient, a biological girl, could be seen smiling while posing with her doctor, a woman who appears to be her mother, and a fluffy dog after having undergone a double mastectomy for the purposes of treating gender dysphoria.

Fresh surgical incisions were visible on the young patient's chest as she stood with her Hawaiian shirt opened and unbuttoned, under a sign that reads: "be yourself."

The doctor who performed the surgery, Dr. Sidhbh Gallagher, posted a congratulations to her mutilated patient on Instagram. Gallagher is a Miami-based plastic surgeon who specializes in what she called "yeeting the teets," or performing double mastectomies of women and girls' healthy breasts for the purpose of gender affirmation.

Gallagher has performed hundreds of breast removals on biological women for the purposes of gender affirmation, and has treated patients who are only 13-years-old. Her practice is in Miami Beach, Florida.

During one week in 2020, she performed 22 double mastectomies.

In a TikTok video, Gallagher lamented at only performing 4 double mastectomies during one week.

Gallagher addresses performing double mastectomies on healthy minor girls, saying: "We are happy to offer top surgery to minors with consent of parents and the recommendation of the patient’s mental health professional."

There have been questions of whether or not minors could actually give informed consent for the removal of their reproductive materials, such as breasts, uterus, ovaries, etc., given that their brains are not fully formed, and they do not fully understand the human urge toward reproduction, or have a real sense of how they might feel in the future.

Gallagher also posed with the young girl after removing her breasts and leaving behind surgical incisions and scars. In 2021, it was discovered that Gallagher had performed a double mastectomy on the healthy breasts of a 13-year-old biological girl who identified as trans.

"When we evaluate each patient, we keep in mind the risk benefit analysis and understand that it may well be much more detrimental to the patient to wait until the age of 18 for surgery. Each case is evaluated with patient and family," Gallagher's website states.

Gallagher offers multiple kinds of breast removal procedures to varied and differing results, such as "masculinizing top surgery," or double mastectomies that leave no nipples behind at all, or have nipples moved to other locations for aesthetic purposes.

In her TikToks, Instagram, and Facebook posts, Gallagher talks about how to get insurance coverage for these surgeries, and the "gender euphoria" that is the result of the body mutilating surgeries that she performs on those seeking to appear as the opposite sex, or as no sex at all.

"Gender euphoria," per trans health site Plume, is "the psychological state of bliss and comfort that happens when our gender expression is aligned with our identity." This, they write, can be cognitive, social, or body euphoria. Cognitive euphoria can be identified as having feelings such as "I love myself" and "I am lovable as my authentic self," states Plume.

Social euphoria, they write, is entirely based on how a person is viewed by others. "When others gender the person correctly, title them correctly, and call them by the right name, it sparks a powerful sense of happiness and belonging; especially important with family members, coworkers, and friends because it creates community," Plume writes.

Body euphoria is feeling comfortable and "free within this physical form."