"The youngest transsexual patient in this series was 15 years old and postpubertal and had been taking testosterone for 2 years," reads the paper’s discussion section. 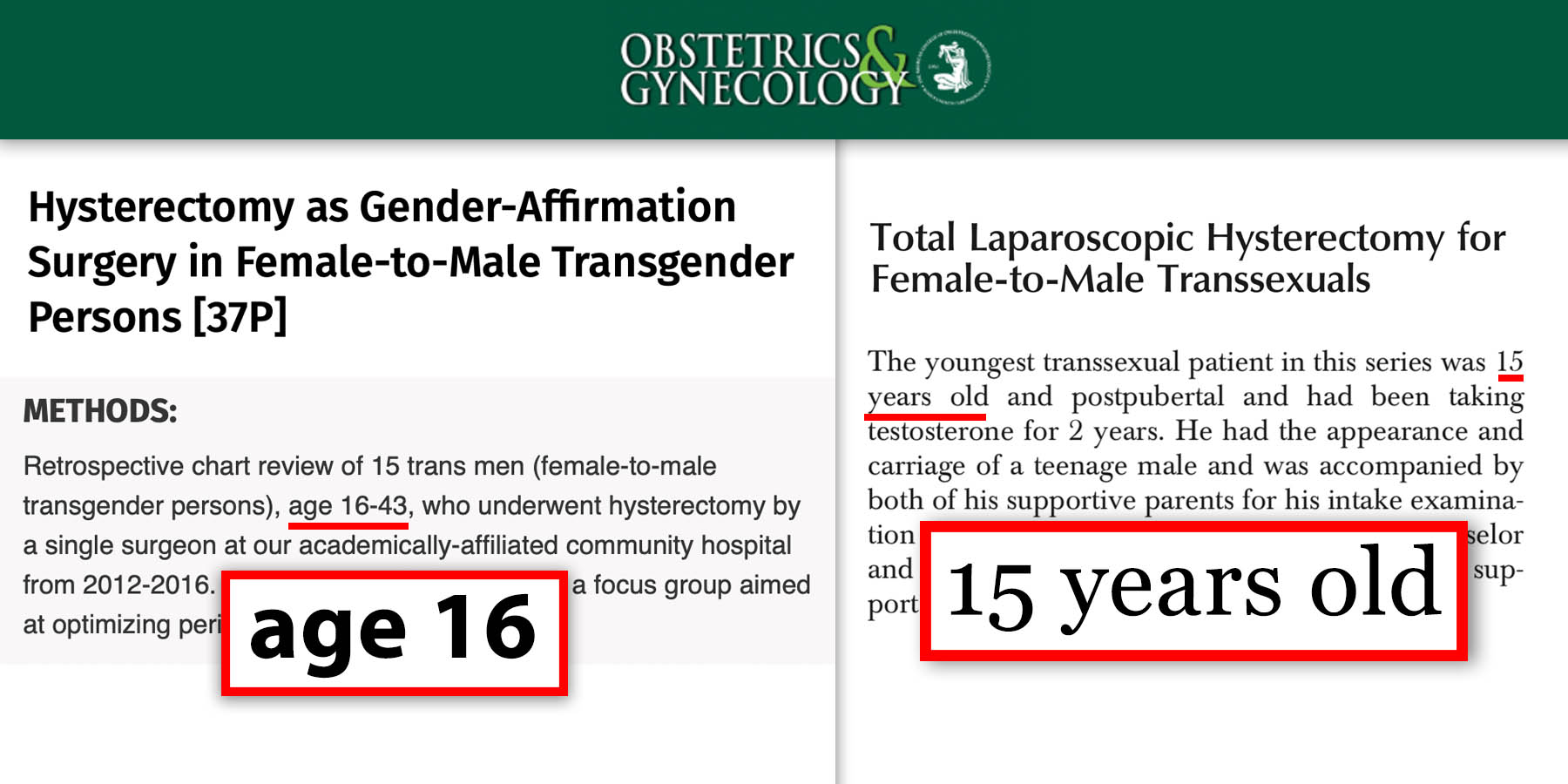 Scientific journals documenting procedures and practices regarding health care for trans individuals shows that "gender affirming" hysterectomies are being performed on minors in the US. As reports have recently surfaced that children's hospitals across the country are willing to perform these surgeries for minors, and promote the practice, many media outlets have said the reporting is false.

However, case studies in scientific journals show that the practice is underway in many hospitals. These peer reviewed journals indicate that hysterectomies, an irreversible and sterilizing procedure to remove the female reproductive system, are performed by doctors on trans-identified teens in the United States.

A medical center in Washington published research on gender-affirming hysterectomies wherein the youngest patient in their study was 16.

In the Methods section of their report, published in the Journal of Obstetrics and Gynecology, the researchers wrote: "Retrospective chart review of 15 trans men (female to male...), age 16-43, who underwent hysterectomy by a single surgeon at our academically-affiliated community hospital from 2012-2016." This indicates that at least one hysterectomy was performed on a 16-year-old for the purpose of treating gender dysphoria.

A 2007 paper in the Journal of Obstetrics and Gynecology said that a 15-year-old patient received a hysterectomy for the purpose of treating gender dysphoria.

The section reads: "Young age is a relative contraindication for hysterectomy and oophorectomy. However, youth are identifying their gender identity at earlier ages than in the past. The World Professional Association for Transgender Health allows for hormonal and surgical therapy for postpubertal candidates who are following the guidelines. Transsexuals who were diagnosed with gender identity disorder in their early teens were reported to 'pass' undetected much more easily as members of the opposite sex if their secondary sex characteristics were reversibly suppressed until their diagnosis was firmly established in their later teens.

"The youngest transsexual patient in this series was 15 years old and postpubertal and had been taking testosterone for 2 years. He,"  the paper notes, using the minor's preferred, male pronouns, "had the appearance and carriage of a teenage male and was accompanied by both of his supportive parents for his intake examination and throughout his surgery. His school counselor and his personal therapist each wrote letters of support for his surgery," reads the paper’s discussion section.

"From this review, it can be concluded that total laparoscopic hysterectomy/bilateral salpingoophorectomy has a role in the gynecologic care of female-to-male transsexuals, even those at a very young age, if they are following the established Standards of Care," the authors concluded.

A paper published in July in the Journal of Pediatric & Adolescent Gynecology indicated in the abstract that many under-18 girls seek hysterectomies for the treatment of gender dysphoria: "Many transgender and gender diverse adolescents and young adults will pursue hysterectomy for the purpose of gender affirmation." This paper notes that the hysterectomies on the three persons studied were performed after the person came of age.

One of the authors of the article is Elizabeth Boskey of the Center for Gender Surgery at Boston Children's Hospital. Boston Children's Hospital has come under intense scrutiny recently for their policy of performing vaginoplasties on boys under 18. Vaginoplasty is a complex procedure with a high rate of complications, with 20 percent to 70 percent of trans-identified male patients reporting to have experienced complications from surgery.

After it was reported that they engaged in this practice, Boston Children's Hospital scrubbed their website to remove that. However, a pdf available on their site to guide those seeking vaginoplasty in how to access it, reads clearly that the practice is permitted for 17-year-olds.

The American Medical Association’s Journal of Ethics published a peer-reviewed article in 2020 that stated at the outset: "The nascent field of gender-affirming surgery (GAS) for binary and nonbinary transgender adolescents is growing rapidly."

Many academic journals have documented children under the age of 18 obtaining vaginoplasty surgeries. From a paper published in the Journal of Sexual Medicine, titled "Age Is Just a Number: WPATH-Affiliated Surgeons' Experiences and Attitudes Toward Vaginoplasty in Transgender Females Under 18 Years of Age in the United States," the authors wrote "Of the 11 surgeons who had performed vaginoplasty on a transgender female minor, 10 were in private practice. Reported ages of minors undergoing surgery ranged from 15 to 'a day before 18' years."

Another academic paper published in the Journal of Pediatric and Adolescent Gynecology last year wrote in their introduction that "Transgender and gender diverse adolescent and young adults (AYA) may seek gender-affirming surgeries (GAS) as part of their gender affirmation." Throughout the paper, the authors stress that "A growing number of [Gender Affirming Surgeries] are performed in [Adolescents and Young Adults]."

In the paper’s section for gender affirming-hysterectomies, the authors wrote, "We strongly believe that patients, particularly [adolescents and young adult] [transgender and gender diverse] patients, should be counseled separately on the hysterectomy and the option for concomitant oophorectomy."

When it comes to genital surgeries performed on minors, it is usually done on a case-by-case basis and depends on the hospital's policy, as the authors explain: "However, [adolescents and young adults] may also desire to undergo genital affirmation surgeries, which can include sterilizing procedures. Each municipality, hospital, and surgeon varies in their approach to sterilization procedures prior to the age of majority."

They add, "When seeing an [adolescent or young adult] who has had any genital [gender affirming surgery], it is important to ascertain whether the person has undergone a concomitant hysterectomy, vaginectomy, and/or unilateral or bilateral oophorectomy."

The paper cites The World Professional Association for Transgender Health (WPATH) as an authority on transgender healthcare, which has stated that age is arbitrary when it comes to gender-related surgeries. "WPATH [Standards of Care] guidelines recognize that care must reflect individual needs and not arbitrary age limits," they wrote under the heading "[Gender Affirming Surgery] Considerations in [Adolescents and Young Adults.]"

WPATH is set to release the 8th edition of their Standards of Care this year, but a recently unearthed early draft reveals that their minimum age recommendations for children to start the process of medicalized gender transition have been lowered. WPATH now recommends gender-affirming hysterectomies for 17-year-olds, according to the new guidelines.

Anecdotal reports from Facebook support groups have also surfaced that indicate parents are seeking hysterectomies for their minor trans-identified children. 4th Wave Now, a publication dedicated to questioning the medicalization of gender-atypical youth, shared screenshots on Monday with the caption, "Our team looked through the 'affirming' parent FB groups. Turns out, many parents want under-18 hystos. Main barrier isn't surgeons–it's insurance coverage. Here's a mom who was denied, then succeeded a year later–in Washington state–one week before his 17th birthday."

Libs of TikTok exposed public hospital records showing that they perform "gender reassignment" surgeries on minors, including via phone calls with staff at the Children's National Hospital in Washington, DC.

Audio released by the Libs of TikTok founder in late August, accompanied by a report, revealed two hospital workers at Children's National confirming over the phone that a 16-year-old could receive a "gender-affirming hysterectomy" from their hospital. While both indicated that it was possible for a 16-year-old to obtain a hysterectomy, one of them said she had "seen younger kids" than 16 come in for that operation.

An archived screenshot of the website from Aug. 18 shows the hospital's gynecology program originally had "gender-affirming medical care and gender-affirming hysterectomy" for patients aged 0-21 as listed services.

Since Libs of TikTok drew attention to the DC children's hospital, they altered their website and issued a statement denying they ever performed gender-related surgeries on minors. "We do not provide gender-affirming surgery for anyone under the age of 18," said Children's National.

In the wake of these exposes and revelations, media outlets came down on those doing the reporting instead of investigating the claims made. The Washington Post and NPR are just two of many outlets admonishing the reporting from Libs of TikTok, The Post Millennial, and others, calling it "false information" despite the citations.

It is unclear how widespread the practice is, or how many of hysterectomies for the purpose of treating gender dysphoria have been performed, but it has been reported by doctors and researchers that the surgeries have been performed for this purpose. 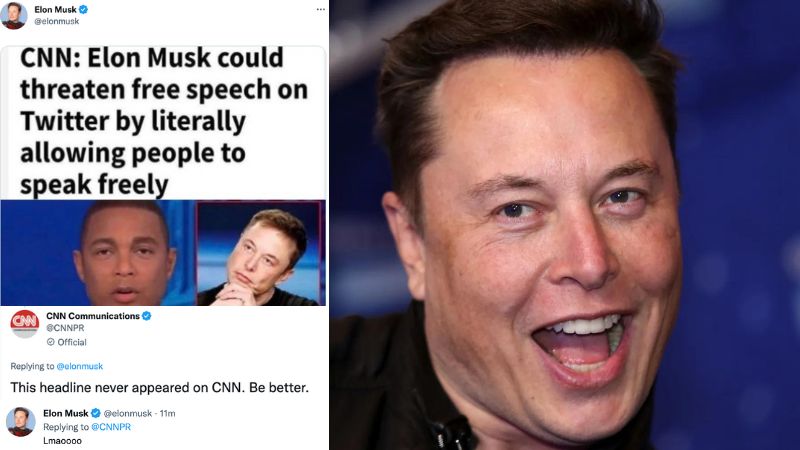