1 in 4 transgender and "nonbinary" people seek "gender affirmation" surgery, and about 9,000 transgender surgeries are performed annually across the United States. 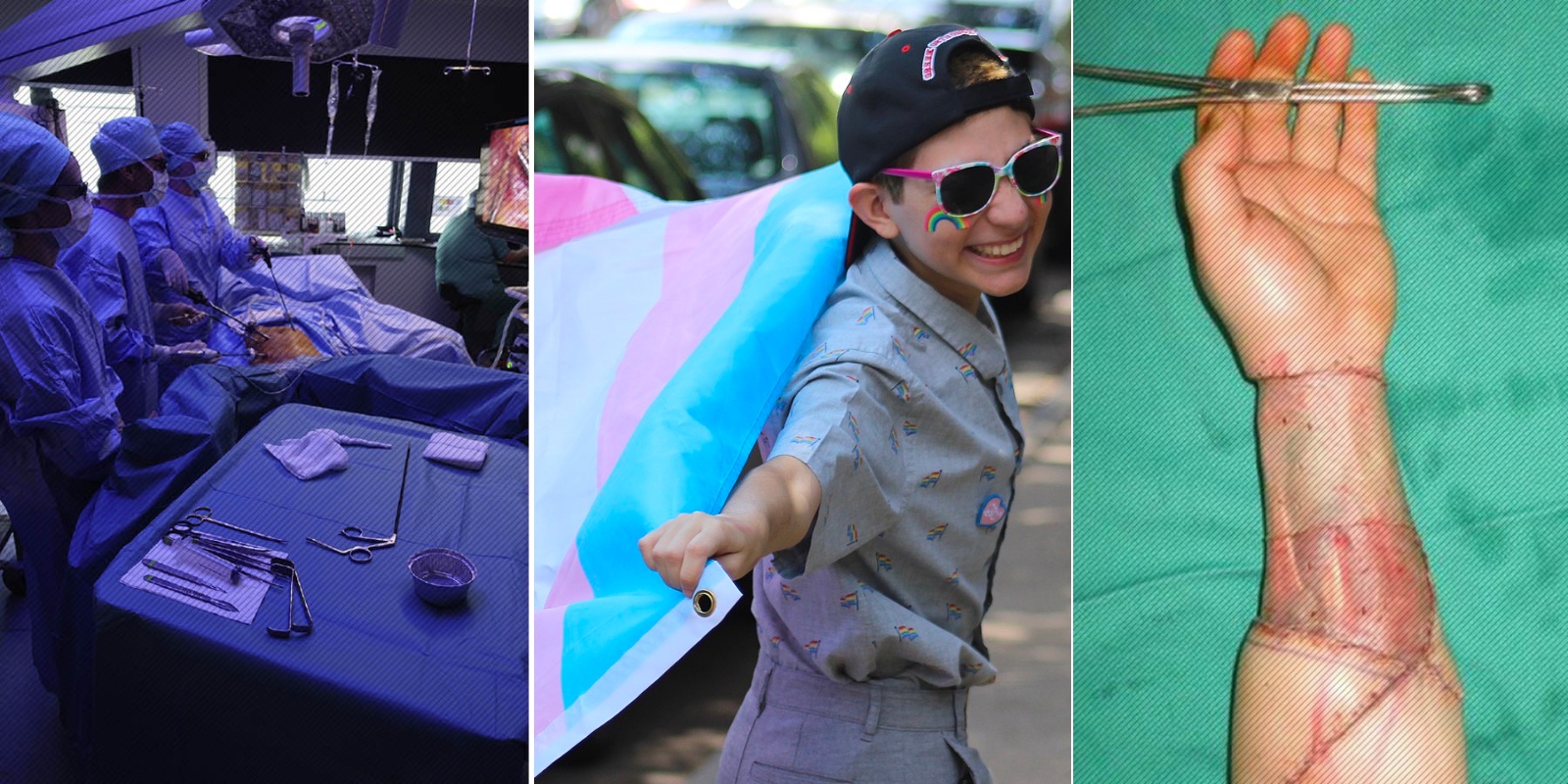 Media coverage of scientific studies—and sometimes the studies themselves— downplay the severity and frequency of complications for those who identify as transgender and seek surgery to give their genitals the appearance and functionality of those of the opposite sex.

A cursory Google search for "transgender surgery" reveals a "featured snippet" from a top search result from the Cleveland Clinic. The Cleveland Clinic site for sex reassignment surgery lists just three common complications. "With any surgery, there is a small risk of complications, including: bleeding, infection, side effects of anesthesia." (emphasis added).

The American Society of Plastic Surgeons, the largest plastic surgery organization in the world, includes a single sentence on the risks of vaginoplasty on their website, "Risks from vaginoplasty include infection, bleeding, pain, along with rare complications."

With surveys reporting that around 1 in 4 transgender and "nonbinary" people seek "gender affirmation" surgery, and about 9,000 transgender surgeries being performed annually across the United States, a number that has been steadily rising every year, it is important to understand the very serious risk of complications involved in these irreversible surgeries.

Vaginoplasty is a complex procedure with a high rate of complications, with 20 percent to 70 percent of trans-identified male patients reporting to have experienced complications from surgery. The purpose of a vaginoplasty is to create a neovagina from existing genital tissue, sometimes also using a section from the colon.

The neovagina must be dilated (forced open) daily with a device for a year after surgery, otherwise the wound created will heal over and close up. Because the neovagina does not contain mucosa, daily douching is required, and low pH can cause frequent bacterial and fungal infections.

Fistulas, an abnormal connection between an organ, vessel, or intestine and another organ, vessel or intestine, or the skin, are a common complication of vaginoplasties. Rectovaginal fistulas, in which bowel contents can leak through an opening, allowing gas or stool to pass through the neovagina, occur in 2-17 percent of vaginoplasty patients.

Urinary tract infections are common, since the urethra is shortened during the procedure. Urethrovaginal fistulas are another type of fistula that cause urine to leak from the neovagina, causing incontinence. 79 percent of vaginoplasty patients reported "dribbling" urine, and 15 percent reported incontinence according to one study.

Intestinal vaginoplasties, which use part of the colon to create the neovagina, require abdominal surgery with a risk of serious or even life-threatening complications. Because of the bacteria in the colon, intestinal vaginoplasties come with their own unique set of problems. Bacterial overgrowth (diversion colitis) is common and presents with frequent secretions of foul-smelling greenish discharge.

The production of mucus can lead to excessive discharge with a foul odor that was reported in 9.5 percent of patients in a review by Bouman and colleagues. The mucus membranes using this technique are more vulnerable to infection and sexually transmitted diseases including human immunodeficiency virus infection (HIV).

Inflammatory bowel disease has been found in an increasing number of patients using intestinal tissue.

A review of scientific literature found high rates of tissue death and wound reopening. Out of 240 patients who underwent penile inversion vaginoplasty, 10 percent experienced wound dehiscence, the reopening of a surgical incision, where underlying tissue is exposed. Eight percent experienced neolabial necrosis, the death of body tissue that occurs when too little blood flows to the tissue, and 15% experienced neovaginal necrosis. A 13-year review of surgical outcomes for vaginoplasty found wound healing disorders in 33 percent of the subjects. A French study found that 15 percent of their vaginoplasty patients required a blood transfusion.

Although considered rare, many cases of cancer of the neovagina have in fact been reported. The development of neovaginal tumors takes from 18 months to 30 years, according to a study from the Department of Pediatric Urology.

Pediatric gender clinics around the United States have issued guidance showing that they allow 17-year-old minors to obtain vaginoplasties. Recent controversies surrounding the performance of this kind of surgery on minors has led many hospitals around the country to edit their pages to say that they do not perform vaginoplasties on minors. However, new WPATH guidelines indicate that the decision of whether or not to grant vaginoplasty surgery to minors should be on a case by case basis, even for underage patients.

Boston Children’s Hospital and UCSF are just two examples of pediatric gender clinics that have said that they permit 17-year-olds to assume these risks, though after media backlash, they scrubbed their pages.

Phalloplasty is a complex series of surgeries that can take 1-3 years to complete. The goal is to create a pseudopenis from skin grafts taken from elsewhere in the body, and it has a very a high rate of complication. 51 percent of trans-identified female phalloplasty patients have urethral complications, often involving urethral strictures, scarring that narrows the tube that carries urine out of your body. It is treated with a catheter and urethroplasty, another surgery to correct the closure. Urethroplasty is required in 94-96 percent of affected patients and fails in up to 50 percent of cases.

Fistulas are the most common complication of phalloplasty that occur in around 25 percent of patients. This results in fecal matter, foul-smelling discharge, blood, gas and urine emptying from the body through the urethra. Sometimes a fistula is accompanied by infection and inflammation of tissues, and urine leaking into this area makes this condition worse.

One phalloplasty recipient said the procedure left them traumatized after undergoing 12 surgeries in the past two years due to complications. A trans-identified female said phalloplasty ruined their life in a series of TikTok videos, begging followers not to follow suit.

"I have a fistula, which is an abnormal connection between my urethra and my rectum," said Cryspy, who describes ongoing urinary tract infections. Cryspy relies on an ostomy bag as a result of the surgery. An ostomy or colostomy bag is a plastic pouch inserted into the rectum or through a hole in the stomach that is used to collect fecal waste from the body. "At age 27, I am pooping in a bag," Cryspy laments.

Metoidioplasty, a variation on phalloplasty for trans-identified females, saw urethral fistulas occur in 7–15 percent of patients and urethral stricture in 2–3 percent, according to estimates reported in 2019.

Penile Prosthesis has significant complications in which 44 percent must be removed, most commonly due to infection at rates of 8.5–17.8 percent. Urologist Richard A. Santucci asserts that 100 percent of penile prosthesis recipients will require revision after 4 years. “If it survives that first year, each year there is a certain chance it will a) break b) move c) erode the phallus and it will have to be removed or replaced.”

A recent study in the Journal of Sexual Medicine for “gender affirming” surgeries reported 129 patients who underwent penile reconstruction surgery. Of those 129 patients, 281 complications were reported requiring 142 revisions. The conclusion of this study found that complication rates, including urethral compromise and worsened mental health, remain high for gender affirming penile reconstruction.

For phalloplasty, they only mention several complications that would require a patient to remain in the hospital after surgery: "infection, phallus blood flow issues, bleeding, or you have a hard time eating or drinking because of nausea, pain control problems, or other issues."

Some of the results drawn from researchers of their own scientific studies can also downplay the risks involved in obtaining genital surgeries. The conclusion section from a 20 year review of "gender affirming" surgeries reads, "Our series demonstrates that [Gender Affirming Surgery] is a feasible surgery with low rates of serious complications," yet 44% of the patients in their study reported complications, half of which reported serious complications. 17% of their sample required additional surgeries.

An excerpt from a study on intestinal vaginoplasties proclaims "excellent" results, yet in the same sentence, says that over half of patients required additional corrective surgeries due to complications.

A website dedicated to phalloplasty information said "Partial necrosis and flap loss are fairly rare, with a rate of up to 18 percent," and although this rate can vary, it seems unusual when prefaced with "fairly rare."

It has been revealed that medical institutions will deliberately withhold information that might damage their reputations and public standing. Recently, the University of Washington was caught obscuring the results of a study on "gender affirming" care outcomes.

Researchers at UW Medicine found that the use of puberty blockers and hormones didn't improve the mental health of trans-identified teens, but published a study claiming they did. Internal emails obtained reveal that when the researchers were caught, officials at UW Medicine and Seattle Children's Hospital advised each other against correcting the misinformation they put out.

When the media touts studies that only track outcomes for a few years, but claim that sex-reassignment surgery is a huge success, there is ample ground for skepticism. Short term follow up studies for gender-related surgeries typically show a low rate of regret (1 percent), but compared to long term studies, the outcomes are much different. A thorough follow-up conducted in Sweden shows that 10 to 15 years after sex-reassignment surgery, the suicide rate of those patients rose to 20 times that of comparable peers.