"Of the 11 surgeons who had performed vaginoplasty on a transgender female minor, 10 were in private practice. Reported ages of minors undergoing surgery ranged from 15 to 'a day before 18' years." 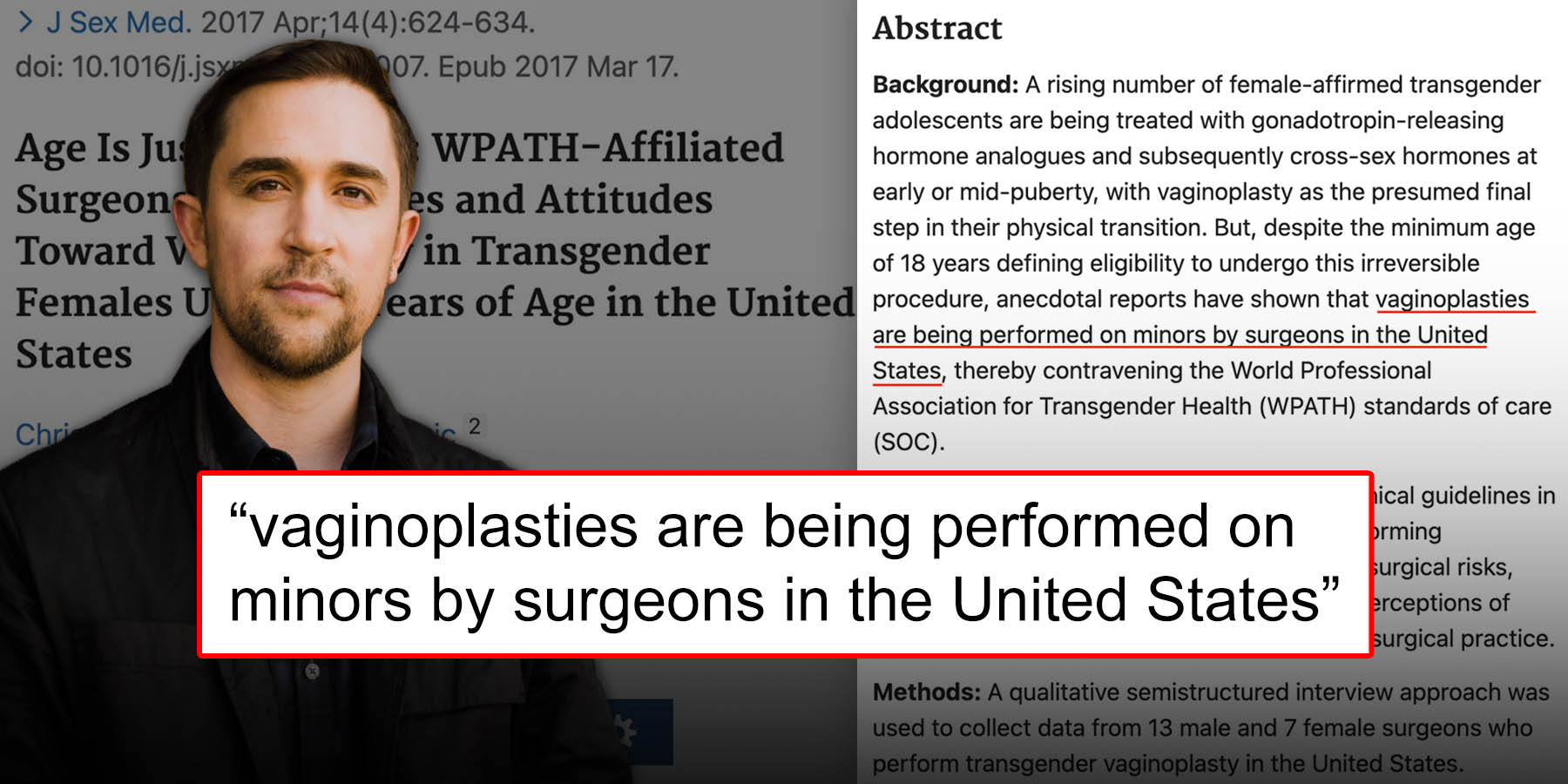 A range of scientific papers published in reputable academic journals have emerged that provide evidence to contradict the activist-held claim that genital surgeries are not performed on minors.

Media uproar over Boston Children's Hospital boasting of having the first pediatric transgender surgery center in the country offering a "full suite of surgical options for transgender teens" has put trans activists and the hospitals providing these services on the defensive.

Trans-identified male activist Alejandra Carabello, who gloated about being responsible for getting Dr. James Lindsay permanently banned from Twitter, boldly proclaimed, "Children are not having surgeries" in response to the Boston Children's Hospital controversy.

Boston Children's Hospital evoked a wave of sympathy from left-wing media by making the unsubstantiated claim that they received violent threats due to misinformation being spread about their policies.

After quietly updating their policy on their website, CEO Kevin Churchwell outright denied that they ever permitted genital surgeries on minors: "Boston Children's does not perform genital surgeries as part of gender affirming care on a patient under the age of 18." However, a quick visit to a web archive of the vaginoplasty page on their website from last month proves without a doubt that the surgery was indeed permitted for 17-year-olds.

Christopher Rufo, perhaps best known for exposing the excesses of critical race theory and gender ideology in public school curricula, tweeted on Friday, "The media line that 'hospitals don't do genital surgeries on minors' is a brazen lie. Researchers have long confirmed that 'vaginoplasties are being performed on minors by surgeons in the United States.' They even titled their paper 'Age Is Just a Number.'"

Attached were screenshots and a link to a paper published in the prestigious National Library of Medicine, entitled "Age Is Just a Number: WPATH-Affiliated Surgeons' Experiences and Attitudes Toward Vaginoplasty in Transgender Females Under 18 Years of Age in the United States."

From the same document, evolutionary biologist Dr. Colin Wright, shared a quote on Friday, "Of the 11 surgeons who had performed vaginoplasty on a transgender female minor, 10 were in private practice. Reported ages of minors undergoing surgery ranged from 15 to 'a day before 18' years."

Boston Children's Hospital is not alone in providing genital surgeries to minors. New guidelines from The World Professional Association for Transgender Health (WPATH), the leading transgender health association, shows they plan to lower the recommended age for minors to obtain cross-sex hormones that cause permanent changes to the body and irreversible chest, genital and face surgeries.

The University of San Francisco Benioff Children's Hospital's Child and Adolescent Gender Center (UCSF) sees children as young as two. According to their treatment guidelines, minors can access genital surgery as well: "As youth are transitioning at increasingly younger ages, genital surgery is being performed on a case-by-case basis more frequently in minors."

Boston Children's Hospital themselves have published research in Pediatrics, the official journal of the American Academy of Pediatrics, indicating their policy on performing genital surgeries on minors. The paper, entitled "Ethical Issues Considered When Establishing a Pediatrics Gender Surgery Center," explicitly states, "The center staff eventually came to the conclusion that it is appropriate to offer vaginoplasties to certain individuals before the age of majority so that they can safely embark on their adult lives."

In addition to offering genital surgeries to 17-year-olds, Boston Children's Hospital published research in the Journal of Clinical Medicine that said they performed double mastectomies, the removal of healthy breasts, on 65 teenage girls between 2017-2020.