In his dismay over not knowing the names of those officers involved in the shooting injury of Jacob Blake in Kenosha, Wisc., on Sunday, activist Shaun King has announced his intentions to indiscriminately dox officers in the Kenosha police force. 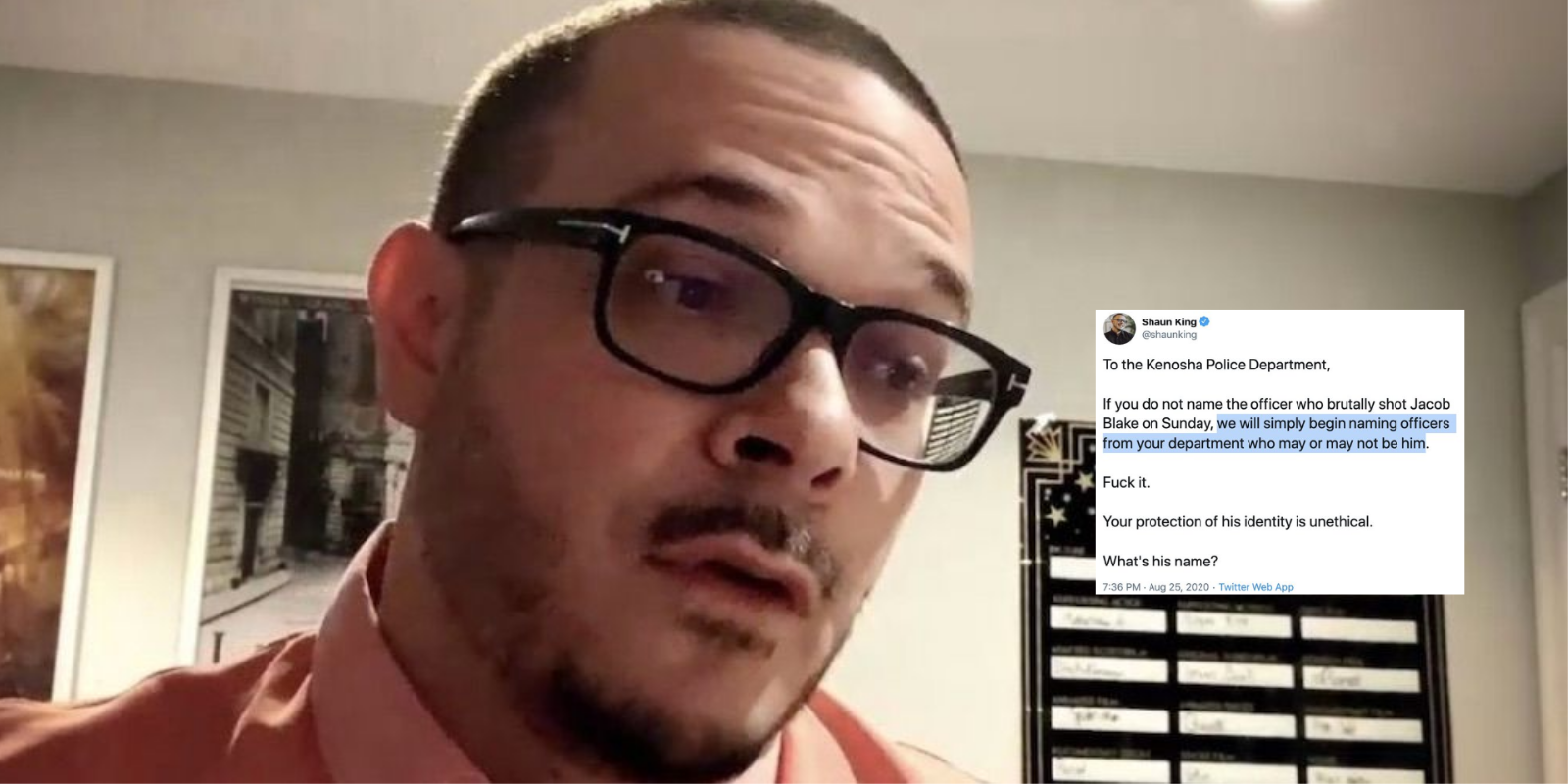 In his dismay over not knowing the names of those officers involved in the shooting injury of Jacob Blake in Kenosha, Wisc., on Sunday, activist Shaun King has announced his intentions to indiscriminately dox officers in the Kenosha police force.

Mike Cernovich responded to King's outrageous threat by drawing out that King has a history of making false claims, including the dissemination of a rape and murder hoax.

King falsely accused a police officer in 2018 of raping a woman, even though body cam footage discredited the accusation. As a result, King backtracked and deleted his social media posts concerning the incident.

King's rampage of falsities did not stop there, as he wrongly accused a man of murdering seven-year-old Jazmine Barnes in 2019. The man accused hanged himself in prison, as ABC13 reported that Robert Paul Cantrell "was wrongly accused in the shooting death of Jazmine earlier this year, stemming from a now-deleted Twitter post by activist Shaun King. Cantrell resembled the sketch initially released of the suspect in Jazmine's murder, but he was never charged."

The Spectator tweeted about the falsity in January of 2019: "Relatives of a white man misidentified by @shaunking as a possible suspect were threatened on Facebook: ‘Someone is going to rape, torture, and murder the women and children in your family.’"

In early May, King took to Facebook to threaten the two men who were accused of shooting Ahmaud Arbery in Georgia, posting: "To Gregory and Travis McMichael, I need you to know that I know where you live and where you are hiding out... Right now I'm the only thing keeping about 150 different from people killing you."

Not only was King content to accuse the two men of the incident, but he put their families in danger by believing he was the only one who was holding back an entire community of people ready to tear the McMichaels apart.

King has also suggested that Jesus is a symbol of white supremacy, posting to Twitter in June of this year: "Yes, I think the statues of the white European they claim is Jesus should also come down. They are a form of white supremacy. Always have been. In the Bible, when the family of Jesus wanted to hide, and blend in, guess where they went? EGYPT! Not Denmark. Tear them down."

What is strange about King's views on Jesus is that there is significant evidence to support the claim that King is white, and once identified as white. Roberto Wakerell-Cruz of The Post Millennial wrote that King is "known for his years-long performance of pretending to be a black man," supporting the proposition that King is a grifter who is desperate for attention and relevance.

King, in early July, chalked up the shooting of a black man in Portland as a result of a "white supremacist," despite clear evidence that the suspect was actually black. He has also tweeted out support of Antifa—a group that President Donald Trump considers to be a terrorist organization.

King has also had his fair share of contradictions—the most recent of which came in the form of his support for the Democratic presidential candidate, Joe Biden. King condemned the idea of voting for Biden and Kamala Harris in 2018, charging them both with contributing to the perpetuation of mass incarceration. Then, earlier this month, he announced his unwavering support for Harris, who he said was "the most progressive VP nominee in American history."

Plenty others have noticed the overt stupidity of King's thoughts and actions, with Siraj Hashmi tweeting that King was a "goddamn lunatic."

Stephen L. Miller ruminated over the fact that Twitter has not yet condemned the false information King has been distributing on their platform, urging people to call and email the social media giant until they receive an answer.

Bradford Traywick reduced King and his actions to being a grifter:

King has spread lies that have resulted in the destruction of people's reputation and the loss of an innocent life, and social media platforms have turned a blind eye.