"The United States has produced more oil in President Biden's first year than under Trump's administration's first year, but at the same time, oil companies are raking in record profits, while more than 9000 approved drilling permits remain untapped by the oil industry," the press secretary said. 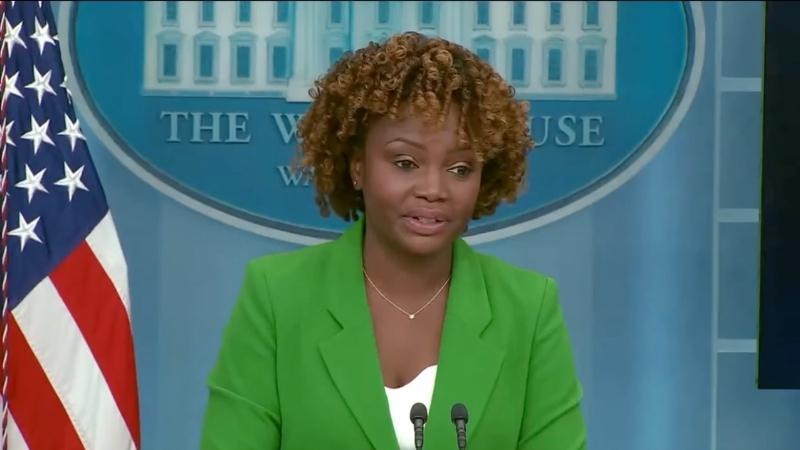 While gas prices are down from the over $5 national peak seen in June, prices are up from one month ago, and still up from last year. According to the American Automobile Association, the national average for a gallon of gas is $3.85, up around 20 cents since September.

During the conference, Fox News White House correspondent Peter Doocy pressed Jean-Pierre on the Biden administration's policies regarding the issue.

"You’re asking oil companies to further lower gas prices. What makes you think that they are going to listen to an administration that is ultimately trying to put them out of business?," he asked.

"How is the administration trying to put them out of business?," she responded, prompting Doocy to remind her of Biden's previous remarks to end the fossil fuel industry.

Jean-Pierre did not answer the posed question, but said that oil companies are "raking in record profits," and claimed that they can lower the prices willfully.

"The United States has produced more oil in President Biden's first year than under Trump's administration's first year, but at the same time, oil companies are raking in record profits, while more than 9000 approved drilling permits remain untapped by the oil industry," the press secretary said.

"There is no shortage of opportunity or incentive for all the companies to ramp up production. This is something that they can actually do. It is available to them, they can do this," she added, before referencing high consumer prices.

"...they can bring that down, they've done it before."

Jean-Pierre's comments come as the president announces additional measures to lower fuel prices, including another release from the Strategic Petroleum Reserves, while continuing to blame Russian President Vladimir Putin for the price increase.

Also on Wednesday, Biden announced that an additional 15 million barrels of oil will be released from the US's supply, "extending our previously announced release through the month of December."

"Earlier this year because of Putin's invasion of Ukraine, the price of oil and gas increased dramatically. And I acted decisively at the time, and thanks in part to those actions. The price of our gas has fallen to 30 percent from the summer highs."

Also during Wednesday's press conference, Jean-Pierre was asked about the ongoing migrant crisis, and how government officials who are overwhelmed by illegal aliens should handle it.

"What we have seen from governors is that they are using migrants as a political tool. That's not the way to do it. And they're sending migrants… without letting city officials know and without letting the federal government know," she answered, referencing Republican governors Ron DeSantis and Greg Abbott transporting illegal aliens from their respective states of Florida and Texas to sanctuary districts around the country.

"... what they do is they call TV news stations to be there to capture this moment and use it as a political stunt. And so we will continue to call that out," Jean-Pierre said, before noting that the administration has already been helping New York City and Washington DC as they've been on the receiving end of buses of migrants from the southern border.

When asked if the president would like more migrants to come to his home state of Delaware, Jean-Pierre became confused, and moved on without answering.