"Instead of coming out of his house to dialogue with us, Secretary Mayorkas has sent the Secret Service outside to destroy our message to him." 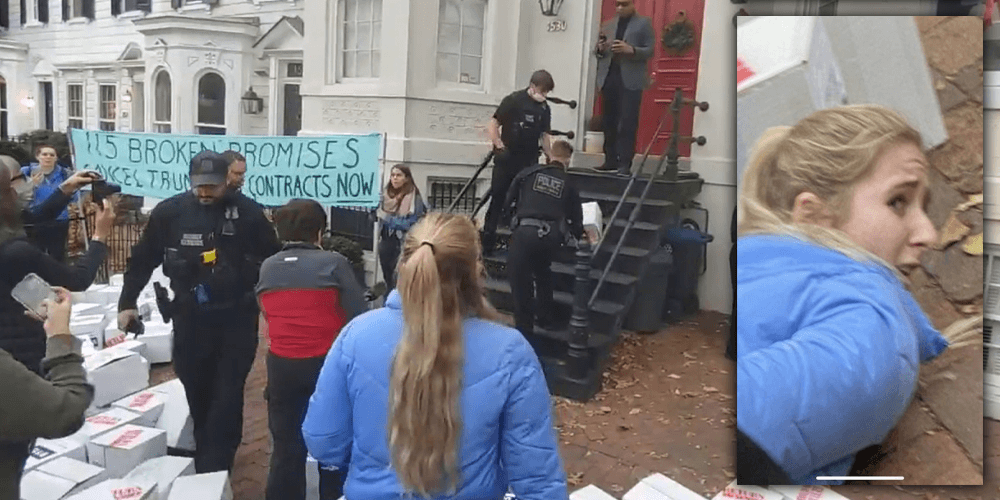 Immigration activists showed up on the doorstep of Alejandro Mayorkas in an attempt to pressure the Department of Homeland Security to revoke Immigration and Customs Enforcement contracts made under the previous administration on Monday. Two members of the group were arrested.

The Never Again Action activist group showed up on Monday outside the DHS Secretary’s house with 115 boxes as a symbolic representation of promises unkept.

(This isn’t the first time the activists have visited Mayorkas at home. Back in September they covered the front of his building with a 30-foot tall banner criticizing Biden’s policies.)

"Biden, Mayorkas, we’re looking at you! Deportations are the same in red or blue!" the activists chanted while clapping outside the Mayorkas residence. The Secret Service agents sent to the address began dismantling the display site.

Never Again Action reported that two of their activists were arrested on scene.

"Unacceptable, we’ll be back," their Twitter account said about the demonstration that lasted for roughly an hour.

According to the Never Again Action website, they say that former President Trump signed a series of contracts that upgraded the power of local police departments to cooperate with Immigration and Customs Enforcement authorities. The group claims that local cops can "investigate the immigration status of people they encounter, look them up in ICE databases, and turn them over to ICE to be deported."

They point to a page on Joe Biden’s 2020 campaign site that outlined his promise to end these "287(g) agreements" upon entering office. The activist group says the administration has failed to deliver on that.

When it comes to the current position of the Biden White House, the administration spent 2021 largely focusing on repealing general immigration policies altogether as first dictated by the Trump administration.

The most noteworthy of these is the "Remain in Mexico" policy that President Biden tried to repeal but was behooved to bring back under force of court order.