Biden reupped his contention that America First conservatives and supporters of Donald Trump are enemies to his regime and the American people. 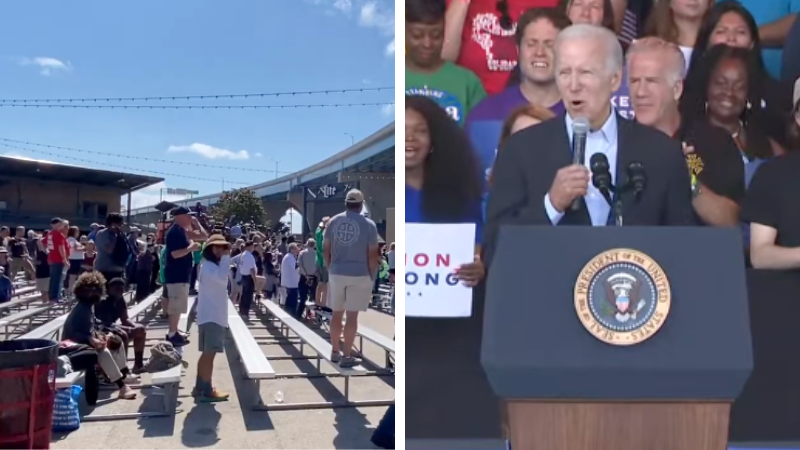 Editor's note: Footage has been added to indicate the size of Biden's crowd throughout the event.

President Biden again spoke to the nation after his disastrous and divisive speech in Philadelphia, Penn. on Thursday night. This time, Biden stood before very few people in Milwaukee, Wisc., to commemorate Labor Day. Biden spoke about his commitment to unions, and thanked them for their support over the years, while bashing those 75 million Americans who did not vote for him in 2020.

Biden was heckled by a man shouting, and said "let him go, no no no no no no no, look everybody's entitled to be an idiot." This is what he thinks of his political opposition. "Extreme MAGA Republicans don't just threaten our personal rights and our social security, they embrace political violence."

Footage captured by a CBS journalist showed a large crowd:

Mythinformed's Sean Fracek who was in attendance, noted that attendance dwindled as Biden concluded his speech, calling it "underwhelming."

Biden re-upped his contention that America First conservatives and supporters of Donald Trump are enemies to his regime and the American people.

Biden said that he and America First conservatives have a "starkly different vision for this country." For his part, Biden believes that men who identify as transgender should have the same protections under law as women, that the federal government should remake the energy sector to benefit Chinese lithium battery makers, and should restrict fossil fuels for heating, energy, and transportation.

Biden claimed that conservatives propagate "violence and hatred," before going on to say that those Republicans that agree with him are alright, those that don't embrace what he calls the "extreme ideology" of parental rights, a belief in biological sex, and commitment to American prosperity over globalism.

"The extreme MAGA Republicans," he said, using a term that his administration spent six months of research to come up with, "in Congress have chosen to go backwards to full of anger, violence, hate and division."

Then he slammed all of his political opponents in Congress who didn't vote for his many mass spending bills, pulling out tiny parts of those bills to claim that Republicans didn't vote for small components, when in fact it was the entirety of the spending bills that conservatives took issue with.

Then he brought up the January 6 riot, saying that "people died," not recognizing that the one person who was killed was a Trump supporter shot by Capitol Police. He leaned into January 6, saying that rioting is what Republicans stand for. This after an insane summer of violence in 2020 that Democrats advocated for.

On Thursday, Biden delivered one of the most divisive political speeches in American history, while flanked by Marines. The White House claimed that this speech, targeting the 75 million Americans that oppose him, was not a political speech.