"To the mayors, school superintendents, local leaders," he said, "who are standing up to the governors who are politicizing mask protection for our kids, thank you, thank you as well. 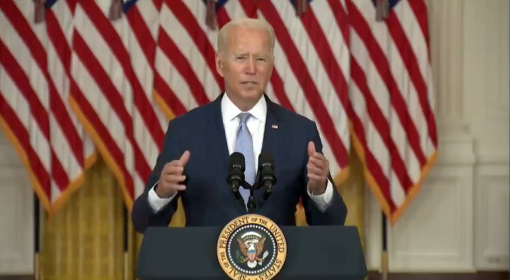 President Joe Biden delivered remarks on Thursday during a glitch filled live stream to talk about this "Build Back Better Agenda" and plans to reduce the cost of prescription drugs.

Before he got into this primary reason for speaking to Americans, he emphasized that children need to mask-up and that while the effort to get them fully masked while in school wasn't a political issue, he applauded those who are "standing up to governors" who have prohibited mask mandates.

"I know there are a lot of people out there trying to turn a public safety measure, that is children wearing masks in school so they can be safe, into a political dispute. And this isn't about politics. It's about keeping our children safe," the president said.

"I saw a video and reports from Tennessee, protestors threatening doctors and nurses, who before a school board were making the case that to keep kids safe there should be mandatory masks. And as they walked out these doctors were threatened, nurses were threatened. Our health care workers are heroes. They are the heroes when there was no vaccine. They're doing their best to care for the people who are refusing to get vaccinated," Biden said.

"And unvaccinated folks are being hospitalized and dying as a result of not being vaccinated," the president continued, harkening back to his statement that COVID is now a "pandemic of the unvaccinated."

"To the mayors, school superintendents, local leaders," he said, "who are standing up to the governors who are politicizing mask protection for our kids, thank you, thank you as well. Thank God that we have heroes like you. And I stand with you all, and America should as well."

His planned speech was regarding the expansion of federal medical infrastructure and steps the federal government can take to reduce prescription drug costs. One measure Biden suggested, one that he's suggested before, is the creation of a new federal agency dedicated to medical research. The $6.5 billion new agency would be housed within the National Institute of Health, and would be called ARPA-H, "like DARPA," he said. It would increase the size and scope of the federal government specifically to engage in medical research, an area that is now primarily in the hands of US medical and pharmaceutical companies.

When a vaccine was needed to fight the novel coronavirus in 2020, it was to private American pharmaceutical companies that President Trump turned, enlisting them to research and generate vaccines with an initial boost in funding from the federal level. The first vaccine that was made, approved for emergency authorization, and ready for distribution was from Pfizer, a private company that did not take that federal investment.

Finally, Biden said "let me close with this," before the live stream, which had been glitchy throughout the speech, went entirely silent.