"The various shots that people are getting now cover that. You're okay," Biden said. "You're not gonna get COVID if you have these vaccinations." 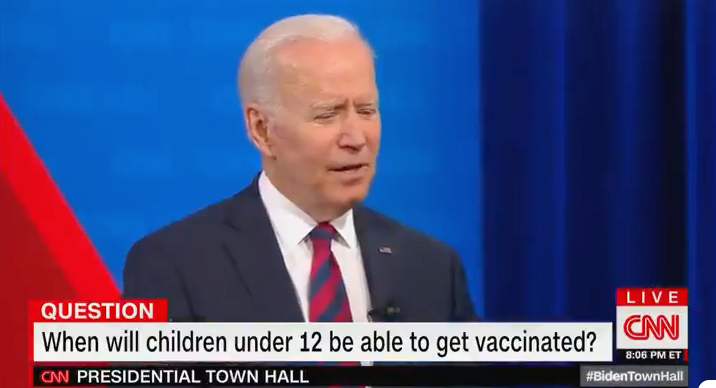 To celebrate his first six months in office, President Joe Biden engaged in a townhall conversation on CNN on Wednesday, discussing the his administration's progress with anchor Don Lemon.

Biden was asked about vaccines, and in response, he said "The various shots that people are getting now cover that. You're okay,"  Biden said. "You're not gonna get COVID if you have these vaccinations."

It was reported on Tuesday that aides to both the President and to House Speaker Nancy Pelosi tested positive for COVID after having been fully vaccinated.

"This individual has had no contact with the speaker since exposure. The entire press office is working remotely today with the exception of individuals who have had no exposure to the individual or have had a recent negative test.  Our office will continue to follow the guidance of the Office of Attending Physician closely."

Biden's claim that a person who has been vaccinated could not get COVID appears to be contradicted by these facts.

Recently, the Biden administration has been banging the drum of censorship in the name of eliminating medical "misinformation" on Facebook. The administration said they have been working with Facebook and social media to censor information that they don't believe it accurate.

Biden even suggested on Friday that Facebook was "killing people" for allowing "misinformation" on their platform. He later walked that claim back, and laid the blame on users. Facebook pressed back against that as well, saying that they are already censoring Americans.

In a press conference this week, Fox News' Peter Doocy asked White House Press Secretary Jen Psaki if "misinformation" that is spread by administration officials, such as Dr. Anthony Fauci, should lead to a social media ban. Perhaps that question will be asked as regards the President's statement.

A question was asked earlier in the townhall about when children under 12 will be eligible to receive one of the COVID-19 vaccines. In response, Biden said:

"And the question is whether or not we should be in a position where are why can't the the the experts say we know that this virus is in fact it's going to be or excuse we we we know why the all the drugs approved are not temporarily approved and but permanently approved, that's underway too, I expect that to occur quickly."

Apparently, Don Lemon understood what that meant, because in response, Lemon said, "You mean for the FDA."

"For the FDA," Biden agreed.

At the beginning of the pandemic, Dr. Fauci said, in response to an emailed question from Sylvia Burwell about precautions she should take, that "Masks are really for infected people to prevent them from spreading infection to people who are not infected rather than protecting uninfected people from acquiring infection." Burwell served as secretary for health and human services from 2014 to 2017 under the Obama administration.

"The typical mask you buy in the drug store is not really effective in keeping out virus," Fauci said, "which is small enough to pass through the material... I do not recommend that you wear a mask, particularly since you are going to a very low risk location."