The two have never met face-to-face for a debate. 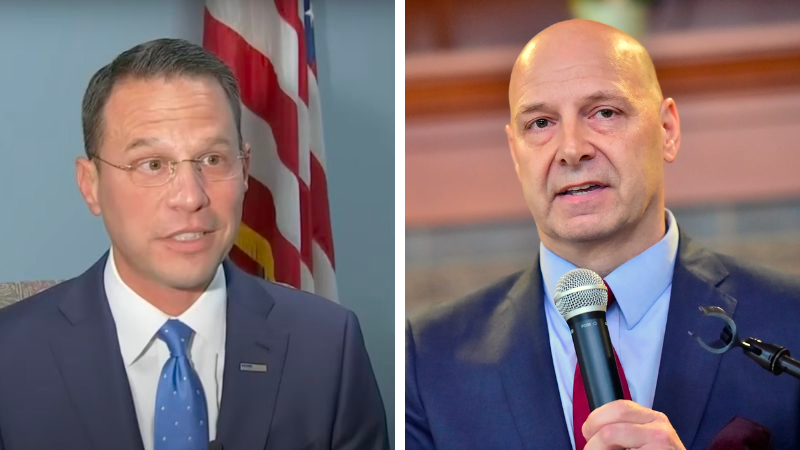 Mastriano now trails by only 4.3 points, with Shapiro at 49.7 and Mastriano at 45.4. The poll shows that 2 percent will be voting for "other" parties, while 2.9 are undecided.

Last week, a CBS poll said that Shapiro was ahead by nine points. The month before, Shapiro led by 11 points. Election Day is set for November 8.

The poll also shows that Republican Dr. Mehmet Oz leads Democrat John Fetterman at 47.7 percent to 45.5 percent, respectively. 3 percent said they were voting for another party, while 3.7 were undecided.

With the gap closing, Shapiro has spent the last week on a six-day, 25-stop tour of Pennsylvania, where he called Mastriano a "uniquely dangerous" candidate. He accused Mastriano of antisemitism.

Mastriano "is by far the most extreme and dangerous person to ever run for public office in Pennsylvania," Shapiro told reporters. "And I think he poses a clear and present danger to democracy, our freedom, and our safety."

The two have never met face-to-face for a debate, something Mastriano has taken issue with.

During an appearance on the Ingraham Angle, Mastriano called Shapiro a "coward" and said that he was "dodging just like the Democrat candidate is down in Maryland against my friend Dan Cox, just like they won't debate in Arizona."

The GOP gubernatorial nominee noted that Josh Shapiro has been Pennsylvania's Attorney General for six years and in that time crime has gone up 37 percent. Mastriano listed some of the crime statistics, such as in Philadelphia "We've had 946 carjackings or attempted carjackings."

The poll was conducted on November 1 through November 3, 2022, and was made up of 1,097 likely 2022 general election voters. The margin of error is +/- 2.9 percent, and has 95 percent confidence in its methodology.
ADVERTISEMENT
ADVERTISEMENT
shapiro mastriano