"This is nothing more than a partisan political weaponization of the criminal justice system," he said. 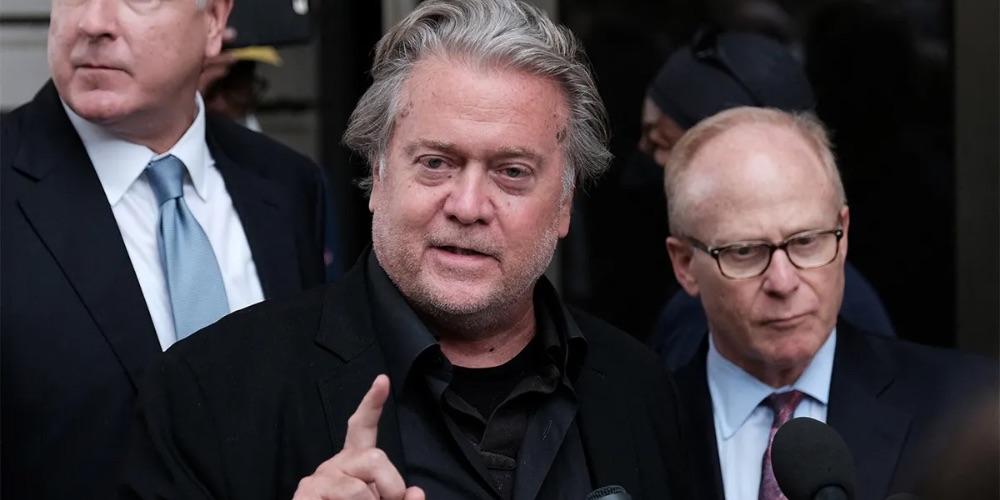 Former Presidential advisor Steve Bannon surrendered on Thursday to face charges that he duped donors who paid to help build a wall at the US southern border.

According to the Associated Press, Bannon's charges are expected to resemble an attempted federal prosecution that ended when President Trump pardoned Bannon. Bannon's alleged crimes are at the state level, however, with presidential pardons only applying to federal crimes.

Bannon faces state money laundering and conspiracy charges stemming from allegations that while he promised donors that all the money donated would go towards building the wall along the southern border, he was allegedly involved in funneling hundreds of thousands of dollars to two other people.

"This is an irony," Bannon told reporters, according to AP.

"On the very day the mayor of this city has a delegation down on the border, they are persecuting people here, that try to stop them at the border," he said.

"This is all about 60 days from the day," he said in reference to the upcoming election in November.

Bannon has accused the Manhattan District Attorney Alvin Bragg of pursuing "phony charges" ahead of the midterms, and has said that he is being targeted. Bannon said that prosecutors "did the exact same thing in August 2020 to try to take me out of the election."

"This is nothing more than a partisan political weaponization of the criminal justice system," he said.

In 2020, Bannon was arrested after he allegedly pocketed more than $1 million in wall donations. It was alleged that investors were tricked into thinking their donations would go to the wall.

Of this latest indictment, Bannon called it a "partisan political weaponization of the criminal justice system." He said he was proud to be "a leading voice" on border issues and crime.

Bannon was recently convicted of contempt of Congress for refusing to comply with a subpoena issued by the January 6 Committee.