All committees are unable to sit with prorogation in process. Trudeau said that Canadians were likely more focused on a "plan to address this crisis." 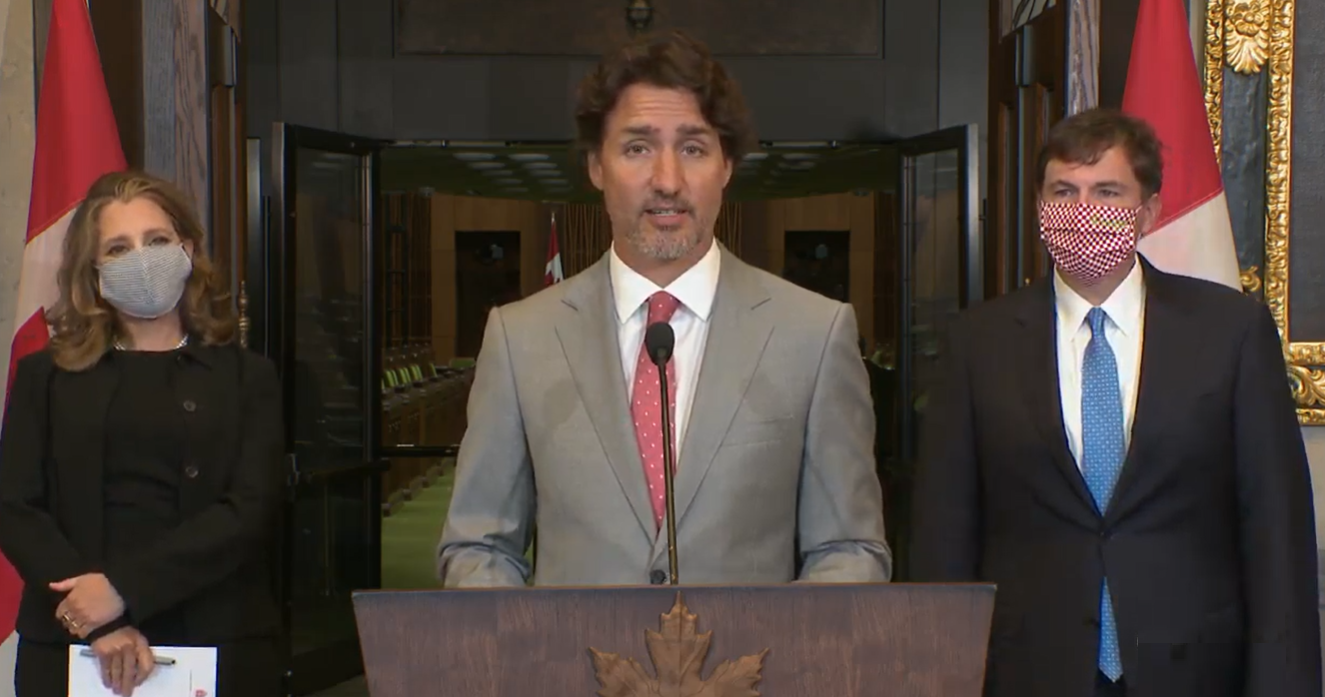 Prime Minister Justin Trudeau held a press conference from the House of Commons on Tuesday following the resignation of Bill Morneau, which in turn lead to a cabinet shuffle that saw Chrystia Freeland take over the role.

Morneau's resignation came after weeks of mounting pressure from Opposition MPs regarding the WE Charity scandal. Morneau had admitted to a $40,000 trip to Kenya and Ecuador that he had not reimbursed until the day before his testimony. Morneau would later apologize for what he called an "oversight."

Last week, Trudeau had said that he had full confidence in Bill Morneau, despite the scandal. When asked what had changed, Trudeau said it has been a "privilege and a pleasure" working with the now ex-finance minister, but that a team "focused on the steps we are taking ... for the coming years" was necessary.

The prime minister did not say whether or not he asked Bill Morneau to stay upon being informed of his intent to step down.

Trudeau also announced that taxes would not be increased, saying that it was "the last thing Canadians need."

Trudeau says prorogue is to 'reset approach' of government for recovery

"We are taking a moment to recognize that the throne speech we delivered eight months ago had no mention of COVID-19, had no conception of the reality we find ourselves in right now. We need to reset the approach of this government for a recovery for a recovery to build back better, and those are big important decisions, and we need to present that to Parliament and gain the confidence to move forward on this ambitious plan," the prime minister stated.

"The prorogation we are doing right now is about gaining or testing the confidence of the House, which is the opposite of what the conservatives did that we rightly railed against back in 2015," he continued.

Earlier today, Shadow Finance Minister Pierre Poilievre highlighted that 5,000 pages on the WE Scandal could potentially be locked down in the case of the prorogue. Addressing the matter, Trudeau said:

"We have released all of those documents to he members of the committee so that they can spend their time going through those mountains of documents over the coming weeks so that they can continue to ask any questions they'd like on this issue."

He continued: "I have addressed these issues, my staff, other ministers have addressed them in committees, and when Parliament resumes in the fall, there will be ample opportunities to continue to ask whatever questions that members want to continue to do. Right now, as a government, I think Canadians want us to be focused on the next steps of the recovery."

The committees are still unable to sit with prorogation in process. Trudeau said that Canadians were likely more focused on a "plan to address this crisis."

Opposition members will have every possible opportunity when Parliament returns in its regularly scheduled week to ask questions on whatever topic they desire. We've been completely open and transparent," said Trudeau.

On the economy, new Finance Minister Chrystia Freeland said that she believes all Canadians "understand that the re-start of our economy needs to be green."