Former President Donald Trump headlined the "Rally to Protect Our Elections" in Phoenix, Arizona, on Saturday evening as the state Senate continues its months-long review of the 2020 Maricopa County ballots. 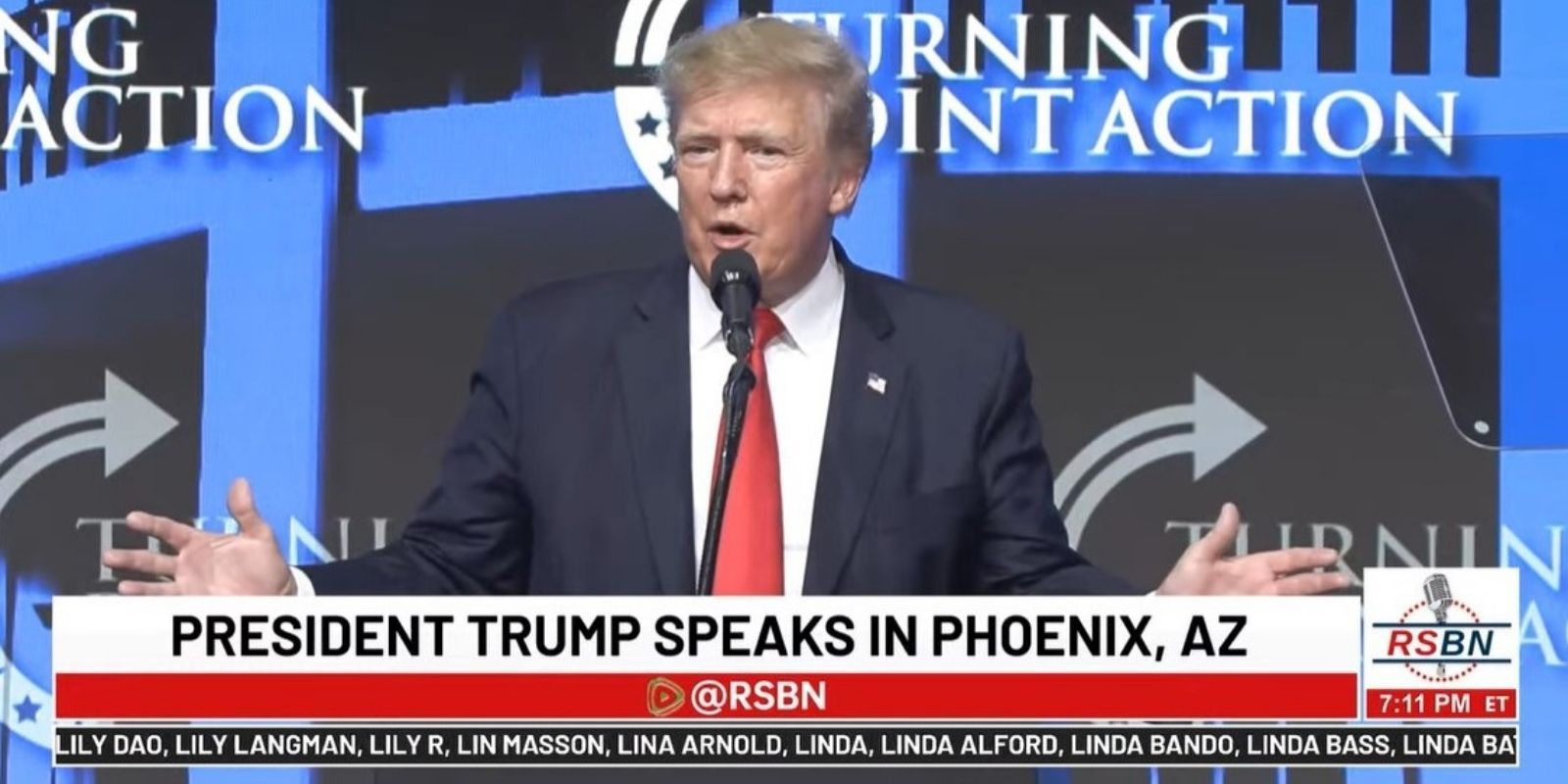 Former President Donald Trump headlined the "Rally to Protect Our Elections" in Phoenix, Arizona, on Saturday evening as the state Senate continues its months-long review of the 2020 Maricopa County ballots.

Trump took the stage at the Phoenix-based Turning Point Action event with extra flair to thunderous applause and chants of "USA!" Conservative activist Charlie Kirk's introduction of Trump was accompanied by a patriotic-themed chyron.

"Like it or not, we're becoming a communist country. That's what's happening," Trump said of the direction America is heading led by the Biden presidency.

"The radical left is determined to ruin everything in America. That's what they're doing. Woke politics takes the life and joy out of everything," Trump said of the far-left agenda being pushed in every sector. "Wokeism makes you lose, ruins your mind, and ruins you as a person. You become warped. You become demented."

Trump called the 2020 race the "most corrupt, dishonest, and unfair election in the history of our country," saying that he, the Democrats, the establishment media, Big Tech, and "we, the American people, know it."

Trump nodded right away to the ongoing Maricopa County ballot review while he laid out his grievances with the results of the 2020 election in Arizona. The packed house exploded when Trump made his case that the presidential race was "rigged."

"What was the difference between 2016 and 2020?" Trump questioned Arizona results mid-speech. "The difference was I did much better in 2020."

Trump eviscerated Gov. Doug Ducey in the Arizona leader's home state, blasting that "he wasn't very popular" and "now he's not popular with me."

"I'm going to follow the law […] I've sworn an oath to uphold it, and I take my responsibility seriously," Ducey defended himself against Trump's attacks for certifying Biden's win in the state. The governor further alleged that the widespread election fraud concerns that exist elsewhere don't occur in Arizona.

Ducey touted Arizona's election system, stating that his stomping grounds has "the strongest election laws in the country" that "prioritize accountability" lay out procedures for conducting, canvassing, and contesting the results of an election.

The governor vetoed a slew of bills in late May, insisting that he won't sign anything until the legislature passes a budget. GOP members in Arizona lashed out over Ducey's move hindering the passage of legislation that would have banned divisive critical race theory training of government workers and another bill that would have prohibited mass mailing of unsolicited ballots to voters in the state.

"The other stuff can wait," Ducey tweeted, calling the budget "priority one."

"We're gathered here in Phoenix to show our support for election integrity and for the brave and unyielding conservative warriors in the Arizona State Senate—thank you," Trump said. "They've created a movement all over the country."

Others who arrived at the Arizona Federal Theatre included most of the Republican contenders competing in the 2022 Arizona gubernatorial and Senate primary races. Ahead of the scheduled rally, Trump also took aim at an Arizona senator who has been critical of the Trump-inspired election audit.

Trump issued a news release Thursday criticizing GOP Sen. Paul Boyer who he called "a RINO if there ever was one" for doing "everything in his power to hold up the damning Forensic Audit of Maricopa County."

"The people of Arizona are demanding it. Boyer has been nothing but trouble, and nobody knows why. All we demand is Voter Integrity!" the former president wrote, noting that Boyer is being "primaried" by former Arizona state Rep. Anthony Kern.

To which, Boyer tweeted in response, "Had Trump built the wall like he promised, perhaps he could've prevented the 40k #BambooBallots from being imported into Arizona." The Republican senator further claimed that the former commander-in-chief incited the Jan. 6 "insurrection" in the nation's capitol.

The effort at the state fairgrounds is entering its fourth month, and the initial hand count of almost 2.1 million Maricopa County ballots has been completed by the GOP-led Senate's contractor, the Cyber Ninjas, according to The Arizona Central.

Boyer said he had no idea what inspired the former president's comments, maintaining that he is not holding up the audit as Trump charged. "I've always been a supporter of a legitimate audit," he told The Republic. "This is illegitimate." Boyer said the audit is playing out as a misdirected, partisan effort.

Senate president Karen Fann noted that Boyer declined to vote for a resolution that would hold officials in Maricopa County in contempt for refusing to provide auditors election materials. Boyer replied, "Had you told us it was an inexperienced, partisan firm, I wouldn't have been the only one to object."

Before the planned post-presidency visit, Arizona Secretary of State Katie Hobbs urged Trump to "accept" the electoral loss, get over 2020, and "move on."

"It is dangerous," said Hobbs, a Democrat, when asked by CNN anchor Jim Acosta on Friday about Trump's upcoming rally. "The bottom line is it doesn't matter what he says or does, nothing is going to change the outcome of the 2020 election. But it also doesn't change how dangerous this is," Hobbs added.

Hobbs called Trump "a sore loser." She claimed that Arizonans are "tired of being led by conspiracy theorists," don't support the "fake audit, and are ready for leaders who will cast the "partisan games aside and deal with real issues."

Arizona election officials found 182 cases of potential voter fraud out of over 3 million ballots cast in Maricopa County, an Associated Press investigation reported. So far, only four cases have led to charges. No one has been convicted.

"I've never said this before, but I've always thought it," Trump said in Phoenix over the weekend. "If I lost the election, I'm okay with it. Seriously, if we lost the election, we lose an election. I'll go home. I'll start building buildings."

Trump reiterated that the election was "stolen" from the electorate. "You know when you win and when you lose," Trump stated. "If I lost this election, I could handle it pretty easily. When they steal it from you and rig it, that's not easy. We have to fight. We have no choice," Trump told his supporters.

During the speech, Trump also went after Hunter Biden who "never painted before" yet is slated to sell amateur artwork at the solo art exhibition in the fall between $75,000 and $500,000 to buyers whose identities will not be disclosed.

The White House has established "a system" to keep buyers of Hunter Biden's artwork anonymous. When asked about potential ethics violations surrounding Hunter Biden's art sales, Biden press secretary Jen Psaki said that "a system has been established" and that "he has the right to pursue an artistic career."

"Did the White House play any role in crafting the sales agreement with the New York gallery to protect the ultimate purchaser's identity?" a reporter asked Psaki at the press briefing mid-July, inquiring about the alleged deal that the White House brokered to keep the future buyers of Hunter Biden's artwork confidential.

Psaki confirmed the inquiry and justified the Biden administration's use of taxpayer resources to manage Hunter Biden's budding art career.

Hunter Biden's artistic debut has raised eyebrows over the high-priced pieces and whether the prospective transactions will pose a conflict of interest. Skeptics have cited the issue of anonymity, noting that foreign governments or lobbyists could buy the art through intermediaries in an effort to curry favor with the Biden administration through the presidential family member-turned-artist.

Trump said he recommends Americans receiving the COVID-19 vaccine, but he also voiced that believes in individual freedom to decide against the jab.

"Speech is being crushed. Men are being allowed to compete in women's sports. How do you like that?" Trump asked the audience while the conservative crowd began to boo. "Did you see the weight lifter? [...] It's so unfair."

Trump pivoted to mock Lebron James and the plummeting NBA ratings: "Somebody said that if Lebron James ever decided to get the operation, how would he be on the court? And by the way, Lebron James, you can have him."

Trump observed that the dismal TV ratings climbed after James was defeated.

According to a tweet from NBA Communications, ratings through the conference semifinals are up 39 percent from 2020, and games are averaging 3.5 million viewers across TNT, ABC and ESPN. With both James and the Los Angeles Lakers watching from home after losing in the first round, TV ratings for the NBA playoffs had risen. The numbers destroy the narrative that James has to be elevated as the front face of the national league and protected at all cost.

Trump joked about the Cleveland Indians imminent name change, firing back: "If I was an Indian, I'd sue. Sue them, Indians." He said the team's original name is "one of the greatest" alongside "one of the most incredible logos."

"The insanity of the left knows no bounds and both Indians and baseball fans should be greatly insulted," Trump concluded after griping about the "Guardians."