The article misses entirely that "the majority of parents of all racial backgrounds," as Christopher Rufo notes, "oppose critical race theory in the curriculum." 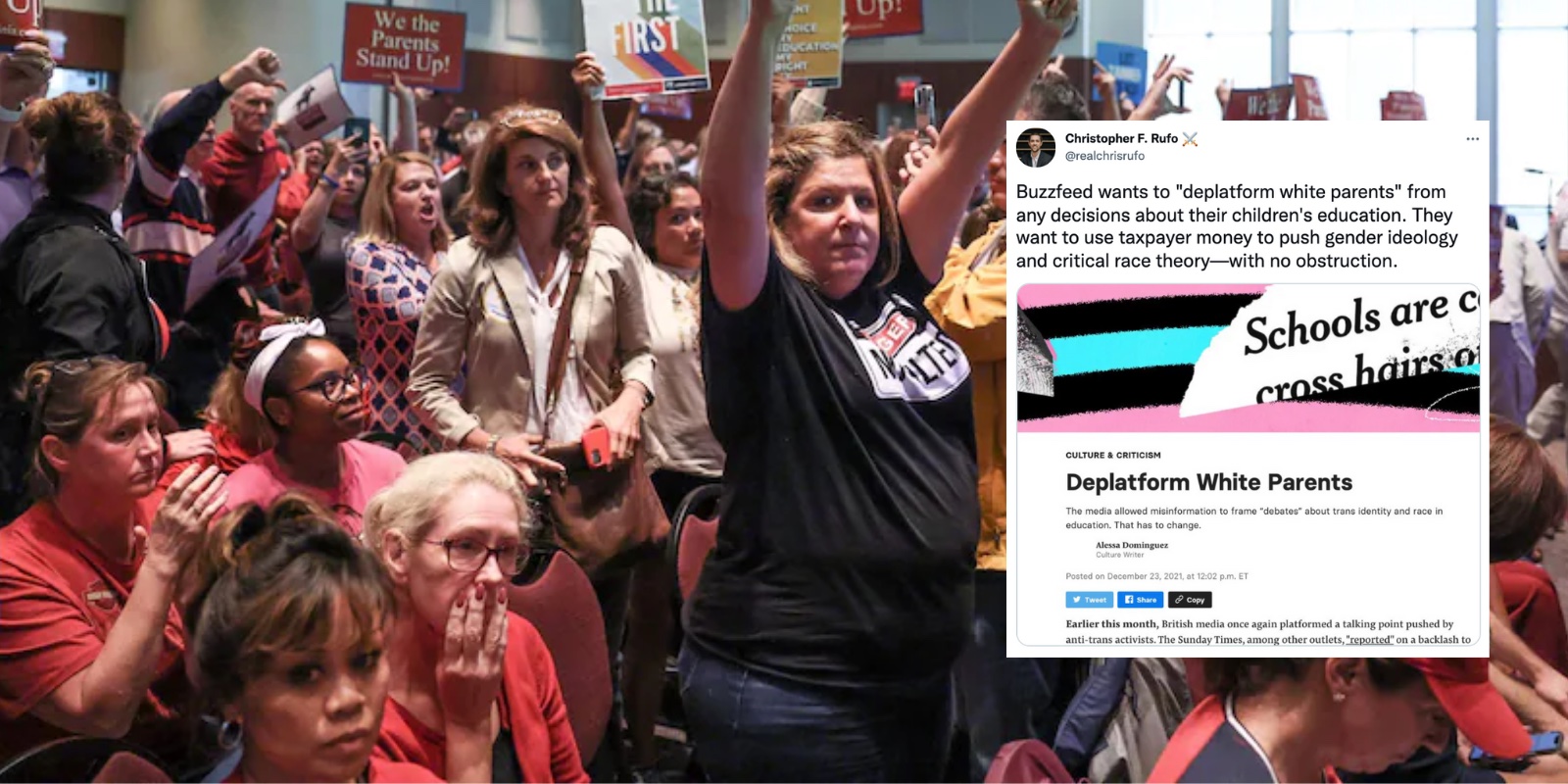 Buzzfeed wants to "deplatform white parents." Their reason is that "white parents" are allegedly the ones behind the rallies against critical race and gender theory indoctrination in schools. As such, Buzzfeed's Alessa Dominguez posits, they should simply not be listened to or permitted to speak.

The article, simply titled "Deplatform White Parents," complains that media gives too much space to those who are opposed to transgender or anti-racist ideology. And it claims that opposition to critical race theory and critical gender ideology set "the terms of debate by centering media narratives around the well-being of white women and children."

The article misses entirely that "the majority of parents of all racial backgrounds," as Christopher Rufo notes, "oppose critical race theory in the curriculum."

During the past year and a half, since children were sent home to engage in remote schooling and parents became aware of the racial and gender ideology that was being presented as learning near every day of the week in many schools, parents have been speaking up from across racial and ethnic lines.

School board meetings filled with angry parents who wanted answers as to why their children were being taught that the country is systemically and irredeemably racist, or that little boys could become little girls, or that black Americans are oppressed to the point of being unable to achieve.

These parents were white, black, Chinese, Latino. They came from different religions and traditions, and all of them wanted their children to be properly educated and not politically indoctrinated. The lessons, parents said, fostered resentment and division and did nothing to realize a greater dream of equality in America.

Yet Buzzfeed claims, as NBC's Brandy Zadrozny did, that the movement of parents sticking up for their kids was nothing more than a right-wing racist plot funded by dark money coming out of think tanks like the Manhattan Institute, where Christopher Rufo is a fellow.

Instead of understanding what parents have been upset about, Buzzfeed makes the same tired claim that parents were upset at "the idea of 'talking about race,'" as though race isn't talked about all the time, constantly, from every corner of our country.

What parents were upset about were the lessons that said outright that differences between white and black people were more than skin deep, that whites are always oppressors and that racism is merely an unchangeable state of the country. Parents were upset about the racist indoctrination posing as anti-racism, and about the T and Q of the LGBTQ+ agenda being dictated as fact.

And who is to blame according to Buzzfeed's Dominguez? The media. And it's the media that should not be giving any space to the opposition to critical race and gender theory. She writes that "trans journalists are woefully underrepresented in newsrooms," as though they are being discriminated against and not because they are a very small sliver of the population.

She says that "media feeds into misinformation by platforming sources that reframe debate outside the terms of the communities these 'debates' actually affect." In other words, "use the language critical race and gender theorists demand or else you're racist, etc." That media outlets try to be balanced simply "helps ignore uncomfortable realities about news capitalism, like the fact that newsrooms need to make a profit and stories are often packaged for advertisers and white readers."

In conclusion, Dominguez posits that one side of the debate which she doesn't think should be had ought be deplatformed, and it's the one she doesn't agree with. She's ruled out the possibility of engaging with critics, instead assuming that they are acting under false pretenses. She's presupposed that they are wrong to the point where no debate is possible. And she's decided, fully, that they should not be heard or allowed to speak. "...[P]latforming 'both sides,'" she writes, "implies we live in an already equal world. We don't. And that's a fact."

The only reason anyone could have an opposing view to critical race and gender theory is being they are being paid to do so, according to Dominguez. She ignores that masses of evidence that these theories, and their perpetration in the classroom, are wildly unpopular. Unable to debate or address the concerns of these parents, she simply wants them to be shut up.